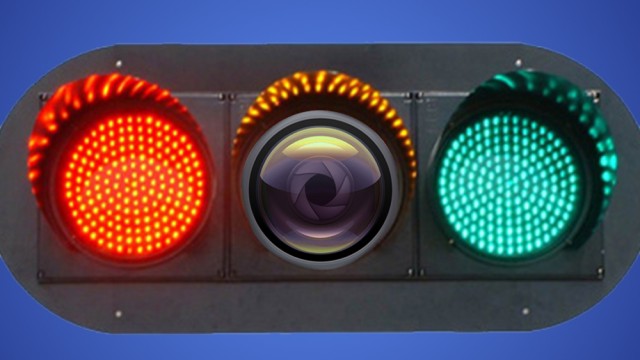 Bright Lights In A Braindead City

And that’s not just talking about the literal flickering pulse that comes into view with each onset of night, but of the vitiated and staunch parts of the city being scrubbed and cleaned, made to look right and neat, like a boulder in a strong current. Some hate it. Some whisper the new nickname of the city with trembling wonder.

No matter how you look at it though, baby, this city still shines.

And since Boston’s verging on six years into her Red Light Camera Program, it seems to be an appropriate time for those still hacking up loogies for spitting squarely at her feet to (1) learn some form of social etiquette and (2) start rolling with the times.

The red light cameras have been here to stay since day one.  Day one was some day in mid-April of 2015, when utility crews in teams of four scurried all over the city and worked like lightning on every corner, throwing up the apparatuses on street poles in record time, avoiding the attention of the grumbling Boston drivers (who, if they even noticed at all, probably muttered to themselves, “Ah, construction,” and kept driving. See something enough and it blends). Each camera was left ready for activation. Activation came at 8:00 that night.

That night was the night of the giant, citywide seizure that no one understood.

City Hall was overflowing the morning after that day in mid-April. The crowd that mounted in the streets could be heard everywhere, shouting, crying, bellowing for answers to the insanity. Why, oh why had the city sparked over and over, a firecracker burning without pause? Why did each corner look like it was assaulted by the paparazzi, but no one was there? The people waited for answers.

None came. Governor Charlie Baker never showed up for the scheduled press conference (one that was stacked with fervid reporters and journalists, camera crews and notepads, at the ready). Neither did Mayor Martin J. Walsh, WCAS ’09.

The two—later to be discovered—spent the entirety of the morning lounging in Baker’s office. Both kicked socked feet up over Baker’s desk, and as Baker worked his way through a case of Sam Adams, Walsh drank a non-alcoholic beer.

In the first night of the Red Light Camera Program, there was a tally of almost a thousand offenses, which added up to over $100,000 in penalties (which, even by the more outlandish expert predictions, was completely mind-boggling). Baker’s assistant—disheveled and tired after working all night manning the governor’s call-in line, confused as to the lackadaisical moods of the two elected officials before him, confused even more by their neglect in informing the public of the change that they planned and executed on the streets—stood waiting for some kind of direction. Baker took a long moment to scratch his chin and stare at the ceiling. “Put it toward the MBTA debt,” he said, slowly. The assistant scribbled it down and scrambled away. Baker and Walsh clanked glasses.

In an email sent to the Boston Globe later that day (chock full of Baker’s drunken spelling and grammar mistakes), Baker and Walsh informed the city of the new program and its effectiveness at generating revenue. They also made mention of the fact that the program would be in effect for as a long as it did generate revenue. They signed with a series of winky faces.

As the nights marched on, a peculiar thing happened: the city continued to light up. By light up, I mean there was an electric beat that could be seen from as far away as Chestnut Hill and Watertown, penetrating the atmosphere. Things didn’t take long to get rolling. Soon, the world caught word of this new phenomenon: the U.S. had a blinking light bulb for a city. And, boy, if you make a city light up like a light bulb, people will most definitely come.

The SkyWalk Observatory at the Prudential became an arena of tongues thrashing through different dialects, profusions of scents and smells filling the air—an assortment of culture and identity, a test tube of the world. Through the wide, high windows at night, people took in the view—Boston, The City of Flashing Lights, burning into the retina of time.

Never had SkyWalk made more money. Along with ticket sales, there were the sales of the instantly popular black t-shirt with a cartoon of the Prudential printed on it, the top floor aglow with gold, the slogan reading “Follow The Lights To Boston,” which sold in greater quantity, surprisingly, than the still popular “Jeter Has AIDS” t-shirt.

There were protests, day in and day out. Drivers felt cheated. Berated. Unappreciated. The fines, for many, had piled up. They couldn’t pay it. Annoyance. Resentment. The cameras aren’t constitutional. You can’t confront a camera in court like you can an accuser. Just make yellow light intervals longer. That’s proven to be safer. Take away the cameras. Take ’em all down. (A lot of the more pissed off ones tried to do just that, climbing the poles with hammers in hand.) The National Guard had to be called in three times in three weeks. People started taking residence in Boston Common, refusing to leave until the cameras did.

Baker (with a cigar dangling in the corner of his mouth) said the same thing to the press (when he actually showed up to talk to the press) over and over again: stop it. Stop blowing red lights. Give us a reason to look to other avenues for revenue.

Every night, the city outshone the governor. Outshone him beautifully. And neither the governor, nor the mayor, gave much of a damn. (As if the drunken email weren’t enough of an indication.) With the money generated from the cameras, the T debt was dropping, the Long Island construction bridge was funded, and investment in education and affordable housing developments increased. Baker’s and Walsh’s approval ratings were at an all time low, but they were doing their jobs—and doing them quite well. Yes, say what you want, but the city was being scrubbed and cleaned, made to look right and neat.

People rioted. They riot to this very day.

It seemed that many of the Mass-holes were missing the point. But, how can you blame them? I’ve heard the driving test over here begins and ends with knowing how to turn a car on. But maybe that’s only a rumor. If more help is needed in this field, just flip to page 43, section seven, line three of the “How To Drive Like A F—king Human Being” guide for clarity on the stoplight guidelines, and I quote, verbatim, “Red means stop.”

The main charm of Boston, now, shows up when the sun sets—tourists and citizens wait for darkness. After the sky blooms in reds and oranges and pinks, and dusk settles in, the first of the flashes can be seen. Within the half-hour, and the settling of night, the Boston skyline (at least from where many come out to watch it at the more popular than ever East Boston Piers Park) becomes a sea of innumerable invisible cameras with visible flashes—a first-kick-off at the Super Bowl on steroids. In the crowd that forms at Piers Park, the oohs and aahs are a customary and expected reaction to the show that hasn’t gotten old, at least for these viewers. But for most of the drivers who get caught by the cameras, it’s another story.

For Baker and Walsh, approval ratings have actually recently started to rise, so they’re looking as chill as ever. Many of the non-red-light-offenders (and some of the red-light-offenders, too, seeing and understanding their ways and changing them) have been able to sidestep the “screw politicians” clout that has grown with the persistence of the program and actually catch wind of what good it was doing, especially now that a ride for one-way on the T is only a dollar. Or the fact that the T is always running.

One can only argue against the improvements if one doesn’t notice the improvements—if one is blinded by the lights. The lights, the lights. A soundless firework show, put center stage. A dying lighthouse, it appears, from far enough away. A testament to the ineptitude. A stunning sign of funded progress. Boston, oh Boston, she’s looking, well, much brighter these days, even though many of the drivers are just as stupid.

red light cameras
Eat Away The Winter: ‘Dine Out Boston’ Offers Restaurant Deals
My Fear Of Growing Old In A Youthful City