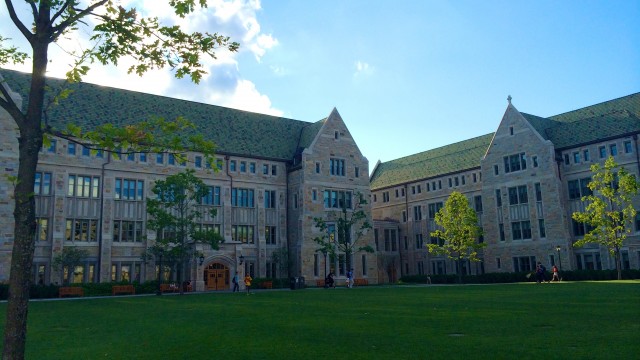 College Of Arts And Sciences To Be Named For Benefactor Morrissey

The College of Arts and Sciences will take on the name of an influential benefactor to become the Robert J. Morrissey College of Arts and Sciences. Robert J. Morrissey, BC ’60, is an attorney and investor in Boston, and a recent donation will make him the largest benefactor in the history of Boston College. Morrissey has always donated anonymously, and the size of his most recent gift was not disclosed.

Morrissey, who earned an honorary Doctor of Laws degree in 2014, served as a University trustee from 1989 to 2014. He has chaired the Committee on Investment and Endowment since 1981. He received his degree from the Harvard Law School in 1963 and upon finishing, joined the law firm of Withington, Cross, Park, and Groden. Since 1990, he has been a partner and founding member of the law firm Morrissey, Hawkins and Lynch.

“The gift marks a major milestone in the life of Boston College,” Provost and Dean of Faculties David Quigley said in an interview with the Office of News and Public Affairs. “Henceforth, all Boston College students will benefit from this substantial investment in the University.”

“Growing those resources became my priority, because I knew that doing so would change the lives of future generations of Boston College students,” he said.

This monetary gift is unrestricted, which means that it can be used to support any area of the University. Morrissey and University President Rev. William P. Leahy, S.J. had several conversations regarding the gift and came to an agreement that Morrissey would make this major gift, and then BC would name the College of Arts and Sciences in his honor, University spokesperson Jack Dunn said.

“Out of humility, Bob Morrissey has always given anonymously,” Dunn said. “In the case of this historic gift, he prefers not to disclose the terms of his commitment. We respect his wishes and extend to him our heartfelt gratitude for his remarkable generosity.”

“We are all indebted to him,” Fish said in an interview with the Office of News and Public Affairs.

“The Robert J. Morrissey College of Arts and Sciences is a fitting tribute to an alumnus whose commitment, service, and generosity provide such a powerful example, and will have a lasting impact on Boston College,” Leahy said in an interview with the Office of News and Public Affairs. “He has devoted much of his life to advancing the University, and now his name will forever be connected to the College of Arts and Sciences.”

Correction: March 23, 2015
An earlier version of this article misstated that Morrissey joined the Board of Trustees in 1989. He started in 1980.

arts and sciences
‘Fifty Shades’ Pulled From BC Bookstore
This Weekend In Arts: Battle Of The Bands, Bostonians Cafe, And B.A.D.A.S.S.