‘Fifty Shades’ Pulled From BC Bookstore

This Monday, the Boston College Bookstore stopped selling E.L. James’ best-selling Fifty Shades of Grey trilogy after a complaint was made requesting the novels to be taken off the shelves.

“We don’t want to offend anybody,” said Tina Plotegher, the assistant director of the BC Bookstore. “We pull things off the shelves—it’s just this happens to be a hot topic.”

The Bookstore has been selling the Fifty Shades trilogy for several months, even before the first volume in the series was made into a movie, she said.

Universal Pictures and Focus Features released the R-rated film in February. The Bookstore sold out of the first volume, and only two copies of the second and third volumes remain in stock, according to Plotegher.

The provocative romance series follows the relationship between Anastasia Steele, a college student, and Christian Grey, a young entrepreneur, as they begin a passionate love affair.

The trilogy consists of Fifty Shades of Grey, Fifty Shades Darker, and Fifty Shades Freed. The books have sold over 100 millions copies in 52 languages. The film adaptation broke box office records over its opening weekend, bringing in over $85 million worldwide. It will be followed by two sequels, the first of which is to be released next year.

“Since the movie [Fifty Shades], started building steam, and people were aware of what the books were about,” Plotegher said.

After the movie’s release, students began to email and call the BC Bookstore to complain that the trilogy was being sold.

“They didn’t believe the University should be promoting a book that goes against Catholic religion,” Plotegher said. “They weren’t complaining to pull it. They were like, ‘Oh wow, they sell that here.’”

But it was the most recent complaint that actually requested the novels to be taken off the shelves.

“The final customer complained the other day,” she said. “It was just this main one that was the force that took [the books] off the shelf. The other ones weren’t like, ‘They should come off the shelves.’ It was more of just rumblings of having the book.”

This final complaint regarding the selling of the Fifty Shades series was sent by email to the Bookstore and the University. The University emailed the BC Bookstore to bring the outside complaint to their attention, Plotegher said.

They decided to pull the book so that they would not offend any customers. The University did not request that the book be pulled, she said. 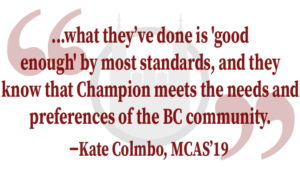