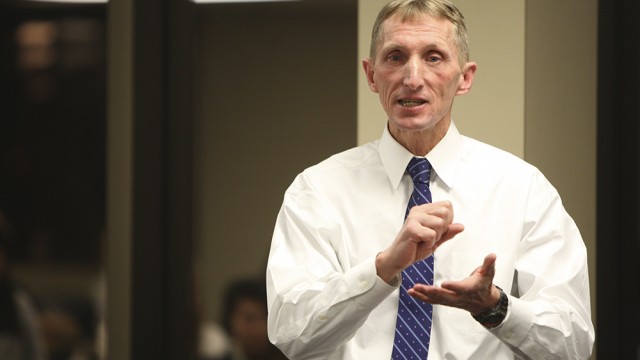 In Good Hands: Police Commissioner Is The Leader Boston Needs

William B. Evans is the face of the Boston Police Department—the top dog responsible for protecting the city of Boston—but he may be considered more of a runner than a policeman.

At 56 years old, Evans is a veteran of 47 marathons, and has completed the Boston Marathon a total of 18 times. Each day he wakes up at 4:30 a.m. and runs seven to eight miles before heading to a full day of police work. Running is his morning cup of coffee—fuel for his craving, a chance to decompress before making decisions that ultimately affect the safety of the thousands of people living in the city of Boston.

After completing the taxing 26.2 miles in the 2013 Boston Marathon, Evans immediately went to relax in a hot tub at the Boston Athletic Club. Just minutes later, a police officer informed Evans of the devastating news in Copley Square. Thousands of people ran in every direction away from the detonation of the two bombs, but Evans ran toward the sounds of chaos. Over the next 42 hours, Evans entered to what he described as “operational mode”—working tirelessly as the leader in the capture of alleged bomber Dzhokhar Tsarnaev.

“I could have easily stayed in the hot tub and taken the day off,” Evans said to a group of 50 freshmen in Boston College’s Emerging Leader Program on Tuesday night. “But people were looking for me to lead.”

Evans, then the Superintendent in the Bureau of Field Services, was the person the BPD and FBI turned to when the two bombers were on the loose in the city. Every order went through him, and he was forced to make decisions that would make or break his career. The biggest decision in his 34 years of police work came on the evening of April 19, 2013. Evans gave the executive order to hold fire in Watertown, leading to the capture of Tsarnaev.

In the wake of an unmitigated disaster, Boston needed a leader—a familiar face to lead the city to justice. A calm, methodical thinker, who wasn’t going to crack at the first sign of trouble. A leader who would approach a malicious terrorist attack with poise. Billy Evans proved he has what it takes to lead.

Just last year, Mayor Martin J. Walsh, WCAS ’09, promoted Evans to Commissioner, based on his extensive resume and his leadership abilities. Evans describes his job as a “sick enjoyment.” He goes into work every day never knowing what to expect, and must constantly be on alert. In fact, he is lucky to make it through the night without receiving a phone call relating to police work. If things go bad, he takes the hit.

Evans’ upbringing is a major influence on his leadership decisions. Born and raised in South Boston, Evans lived in a lower-class neighborhood, and was brought up by five older brothers. Both of his parents died by the time he was 14 years old. Around the same time his 9-year-old brother was killed in a hit-and-run accident. Having to face these terrible tragedies at such a young age, Evans was raised on embracing his community—relating to people and their challenges across the city. This is at the core of his non-violent leadership style, and his motto, “killing them with kindness.”

“Killing them with kindness” has manifested itself in a number of scenarios in Evans’ tenure. In October of 2012, the Occupy Boston movement was sweeping across the city. For 70 days, Evans went down to Dewey Square and led the defense against the protesters. Instead of battling with them, Evans set the tone from the beginning that the two forces would not be enemies, and the non-violent strategy proved to be successful. More recently, police departments across the country have faced major protests for the incidents involving the deaths of Michael Brown and Eric Garner. In Boston, there have been countless protests across the city. Many people are pointing fingers, blaming local police for racist attitudes that have manifested in departments across the country.

“It frustrates me that people relate us with the actions that went on there,” Evans said on Tuesday. “Many people immediately change their perceptions of us from what has happened across the country.”

So when thousands of Bostonians threatened to protest, what did Evans do as the leader of the police force? He let them march. If the officers came ready for a fight, they very well may have gotten one. Instead of arming officers with shields and batons, he showed that his officers would not approach the situation with violence. And it worked.

Boston is fortunate to have a leader like Billy Evans. His non-violent approach has been instrumental in creating an effective police force, and not allowing a situation to arise likes those that have manifested in Ferguson, New York, and Wisconsin. In his second year as the face of the department, he is personally forming trusting relationships with many of the neighborhoods and communities that have been historically violent. When Evans entered as Commissioner, there were 12 homicides and over 75 guns taken off the street in January and February alone. This year, there have been four—a significant improvement in just one year. If Boston wins the 2024 Olympic bid, the city will be in good hands.

It is clear that Evans’ job of protecting the city of Boston can certainly be stressful, but running is his medicine that gets him through each day:

“As long as I get my running in every day, there is nothing I can’t do.”

Correction: March 17, 2015
An earlier version of this column stated that Evans gave the executive order to open fire in Watertown. Instead, he gave the order to hold fire.