Home » Spring Into The Season With Student Art Show 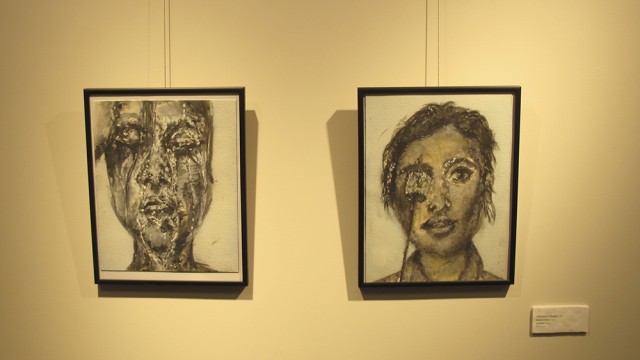 Spring Into The Season With Student Art Show

Tucked away in the first floor of Carney Hall, the least aesthetically pleasing building Boston College has to offer, the Art Club’s Spring Student Show highlights the talents of BC photographer and painters. While it may be a bit hard to find, the exhibit features some extremely inspiring pieces from nine genuinely artistic students.

Firstly, to confront the only real issue with the exhibit, Carney Hall was possibly the worst location that could have been chosen to feature the event. There is no practical reason why it should be there and if you didn’t already know that the exhibit was in the building, there would be few reasons for any student to wander down the hall and come across the marvelous showcase. The show would be much more appropriately placed in a library or a more heavily trafficked hall, but Carney, with literally no advertisement for the showcase, doesn’t do the exhibition justice.

Each work lies suspended against the wall, running down the main hall of Carney Hall’s Student Organization meeting rooms. The modesty of the hall both contributes to and detracts from the show, as there is nothing to either distract or attract students walking by.

The Spring Student Show demonstrated the diverse talent of BC artists. Whether it was format or style, each piece was unique in presentation and meaning, and while some pieces were heavily emblematic of historical styles and artists, these allusions in no way hindered the originality of the artists’ works.

Relapse, by Tashrika Sharma, A&S ‘15, is the most compositionally complex piece that the Spring Show offers. Sharma arranged her piece in nine square wood panels that form a larger, interconnected square canvas. In a very Dadaist manner, nonsensical lines and swirls tied together the piece. 3D triangles poke out from the wood panels, giving the piece an added depth. Despite its intriguing composition, Sharma describes her piece as, “more of a failure for [her].” Sharma aimed “to remove [her] mind from art making and work through [her] hands,” but, through this stylization, she “ended up making this piece reminiscent of [her] old style which is why [she] called it Relapse.” While Sharma may consider Relapse to be too similar to her past works, it exemplifies Sharma’s creative concepts and individual stylization.

Alexandra Deplas, A&S ’18, has three pieces in the student show, two of which, Shower Hour and Untitled, having a similar configuration and style. Deplas was inspired by “the black and white photography and oil portraits that have been flooding [her] instagram and tumblr feeds, and wanted to recreate something similarly bold with a traditionally delicate medium like watercolor.”

Inspired by the ruggedness of painter Peter Terrin, Deplas’ eerie depictions are highly subjective. Deplas said “the portrait is simply conveying a subject under rushing water, someone may take away that the subject is upset and in tears as a result of my edgy brush strokes.” Deplas enjoys leaving the majority of interpretation up to the viewer and her distinct and distorted style helps with the elasticity of meaning in her works.

Deplas’ third work, also a watercolor, is composed on a larger canvas and features a shaded bull protruding from a map of the U.S. and, more particularly, right out of Texas. Again, Deplas is intrigued by the interpretations of the viewers and this piece exemplifies her desire to acquire various reactions from her audience.

One of the most visually striking paintings in the gallery is Imagine by Lucas Xin Lu, A&S ’18. In Lu’s painting, kids on a swing carousel glide by a serene and sublime sky as the viewer watches from below. On conceptualizing his piece, Lu said, “I was going through a phase of stress and pressure in life and therefore I came up with the idea of a starry night and some innocent children to create a relaxing and imaginary feel and setting.”

The magnificent color arrangement and blending in the painting really contribute to the meaning behind Lu’s painting. Lu wants to remind the viewer that “although we seem to live in a world of complexities and intricacies, we should always retain innocence and pursue freedom in our hearts.”

Lea Oriol, A&S ’15, has the most pieces in the show with her four watercolor paintings. Yeu t’aime and The Last Season, two equally well sized landscapes, demonstrate Oriol’s stunning color palette. Moving to San Francisco after graduation, Oriol said,  “[she] will not get to experience the beauty and melancholy of fall anymore so [she] wanted to capture it … that by looking at [her] pieces, people feel transported either to a real or imaginative place that they cherish and that [her] paintings remind them of.”

The Spring Student Art Show brought together an impressive group of BC artists that exhibited compelling subjects and captivating composition. Despite its poor setting, the exhibit shines as an inspiring collection of the talent that guides University painters and photographers.