Home » Exercise In Self-Hate: Reasons Why Lists Are Awful 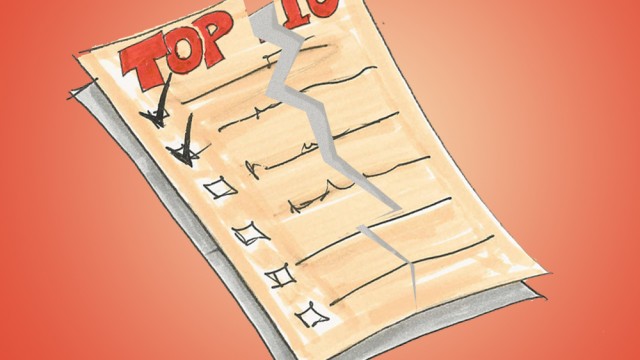 Exercise In Self-Hate: Reasons Why Lists Are Awful

Articles are narratives that, hopefully, culminate into some sort of argument. Lists, on the other hand, are scribbles—scribbles written on sticky-pads by people who need to remember to pick up milk on the way home. They are helpful in a pedestrian sense and entertaining when trying to sort out our 10 favorite grunge bands.

Historically, lists have been used to great effect (see: the Reformation and the Constitution), but they aren’t exactly memorable. For instance, can anyone name the right granted by the Third Amendment? Probably not. Yet for the three people reading this who care about our founding precepts (my apologies to the other five), the Third actually prohibits the quartering of soldiers in private homes without the owner’s consent. See? There, now we all learned something today, although it was rather derivative.

Unlike prose, the points in lists are often completely autonomous, and while the word “autonomy” may strike a prideful chord in our Western, democratic heart-chambers, it should not be the goal of articles. If I can remove every other point in the article and still make sense of it, that means there is utterly no progression being made, but only a collection of superficial points that do not meaningfully coalesce, aside from their common theme of all relating back to the title.

Even if there is a logical progression to the argument, lists necessitate that each point can be pulled out as an independent, solitary justification of the article’s title. This independence helps keep the list-article clear in the same way that paint-by-numbers helped us all become better artists by assuming that we are all idiots who need numbers to make sense of our surroundings (which is not altogether wrong—when crossing the street it certainly helps to have a countdown).

Subconsciously, the thought-pattern of the reader of a list is tantamount to, “15 Spectacular Bathrooms In London You Need To Take A Selfie In.” Okay, here we go. Point number two: Nopi. This is a picture of Nopi. Nopi is a bathroom in London. I have a phone. Phones take selfies. London-Bathroom-Phone-Selfie. Eureka! It all checks out. Point number three: The Knights Templar.” In the best case, lists dismantle the narrative quality of articles and split cohesive arguments into a pile of splintered points, and, in the worst case, they create a medium of publication for quarter-baked ideas that sound like an exercise in procrastination rather than a real article (see above Buzzfeed article).

The number of points one makes in an article is arbitrary, yet lists elevate this number to indefensible heights, and they turn articles from astutely observatory to assiduously masturbatory in their pursuit of a higher number. In reality, the number of points you have only tells me how much or how little research you did. Like a curmudgeonly history teacher, I have become disposed to assume that a low number means you couldn’t scrounge up a double-digit dissertation on why Dogs In Hats Are Better Than Dogs Not In Hats. Any number above 20 leads me to believe that your overly ambitious research overwhelmed you to the point of indiscriminately vomiting every snippet of useless information you accrued, which has rendered my scrollbar the size of a tic-tac.

Some points aren’t real points. No matter how much importance you ascribe to this staple crop—the use of which ranges from yogurt to ethanol—a non-sequitur the likes of “Corn can also be red” in the middle of an article about lists would derail its argument completely. With lists, however, you can just forget you read it and continue your perusal. So go on. Go. Get out of here.

Lists assume we are stupid, as if we all still read at a See Spot Run-level and cannot yet handle paragraphs.

Paradoxically, while the collective knowledge of humanity increases with every scientific discovery—self-driven cars have outpaced humans, and can operate completely independent of us, which is terrifying—automation and machine-correction slowly render our individual intellects obsolete. Predictive keyboards, for example, are facilitating my amicable divorce from the English language. The other day I typed in “aleng space,” and on the screen appeared “align.” Do you know what I learned from that encounter? That “align” is spelled “ALENG.”

We are breeding idiots—I am an idiot, thanks to the rectangular demigod I carry around in my pocket. My phone even coddles me by supplying me not only with the empirical weather data, but also with a motherly message the likes of, “Colder than yesterday, and windy too. Better bundle up!” Shut up, phone. Let me make the mistake of wearing fewer layers than appropriate so I can learn for myself how big boys dress.

I’d love to say all kinds of things about how I love lists, but I can’t, because I said in the title that I don’t. Deep within, I am brimming with affection for these enumerative texts, the formatting of which mirrors that of the 1765 Stamp Act, but alas my own title censures me. I would love nothing more than to take you on an list-ful odyssey which culminates in my realization that lists are the apex of literary creation and, indeed, the crowning achievement of man, if only the list’s name did not prevent me from doing so. But it does. So let’s move on.