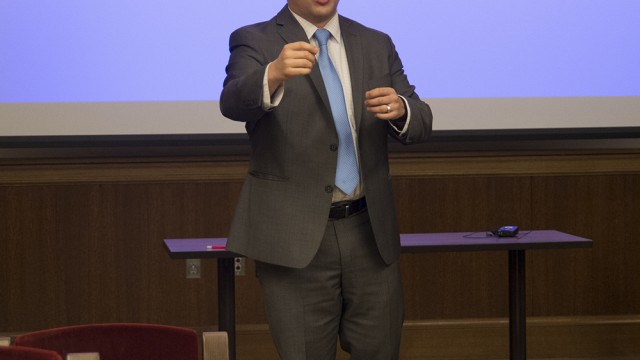 Ron Kim Calls For Student Resolve In Face Of Failures

New York State Assemblyman Ron Kim first realized that it is okay to fail at a young age when he bragged to a classmate that he got an A on a test. When he asked his classmate what grade he got, the boy was not afraid to admit that he got a C. Kim said that this boy saw this as a chance to improve for the next test, not as a failure.

Many of us, said Kim, are afraid of and embarrassed about receiving poor grades. But at this point, he realized that it is okay to fail.

On Saturday afternoon, AHANA Management Academy (AMA) and the Korean Students Association (KSA) hosted Kim to share insight into his journey to politics as an Asian-American man.

“I think I can summarize everything I’m about to say in seven words,” Kim said. “And it’s to get off the treadmill and run towards something.”

“When we come here, we are taught that you have to get on this treadmill,” he said. “You gotta follow the rules, you gotta get that next carrot so you can make sure you can be successful because as minority Americans we may not get the second opportunity.”

Kim immigrated to America when he was 7 years old. In South Korea, his dad had been an electrical engineer, but his parents left everything to come to this country for a better life for their son. Upon arriving, they lived in Flushing, N.Y., and his dad opened up a grocery store in the Upper East Side.
His father decided to come to the U.S. so that his son would not have to run on this treadmill—so that he could study what he wanted to study and become who he wanted to become.

As a result, Kim’s father never told him what he had to study or what he wanted his son to pursue. He told his son to follow his passions, Kim said.

Intrinsic motivation is when one finds what one is passionate about and pursues that over what the community, or parent’s, or society thinks is best, Kim said. In doing this, not only will one enjoy his or her career more, but he or she will also be more successful because that individual is driven by passion. That person is purposeful and without fear of failure, he said.

On the other hand, many on the treadmill seek extrinsic motivation, which are those carrots that get people out of bed each day, like making money. Kim said that there is nothing wrong with these motivators so long as there is also passion for reaching certain goals in the distant future.

He warned that after college, many people are presented with extrinsic motivations that tempt them to sway from their passions and life goals.

“This is the time, in college, for many of you guys to figure that piece out,” Kim said. “That’s the core of my message—to find purpose, intrinsic motivation we call it, something that comes from with inside. What is it that makes you tick? What is it that gives you that intrinsic drive?”

He said it is important to realize that life is a marathon, not a sprint. We need to have grit. We need to learn with passion and not be afraid to fail, Kim said.

Asian-Americans, Kim explained, are purposeful but they fear failure. They are driven by ethical pride, that they feel insecure, they have a chip on their shoulder, and they rely too heavily on religion.
Kim said that at first he was feeling this way. His father wanted him to become a star tennis player because he loved tennis. Instead, Kim pursued football because he was passionate about the sport.

He ended up playing for Hamilton College in upstate New York. Kim said, however, that at this point in his life he was very impulsive and lacked purpose. He stopped studying, joined a frat, and began getting into a lot of trouble. After his freshman year at Hamilton, he was asked to leave for a year.
Kim secured four jobs while on leave due to the good economy in 1999 to 2000. While he was exposed to some great opportunities during this time, he realized that he wanted to return to school and study political science.

“It was a very eye opening experience for me,” Kim said.

He exclaimed how grateful he is, looking back on his experience in college, to have been given a second chance, to find that intrinsic drive. Kim said this goes to show that even if you fail, you can bounce back and find something that you enjoy doing.

Two years ago, he was elected to the Assembly in New York. He pointed out that during his campaign his platform was not that he wanted to be the first Korean to hold this position.

He pointed out that there is only one Asian congressman on the entire East Coast.

Kim said when he was elected to office, he was walking in the New York State Capitol in Albany and an older man, a state senator, began dancing in front of him. The senator explained that he was trying to impersonate Psy and asked if Kim knew him.

“How pathetic is that?” asked Kim.

He said, however, that in these moments, which we all experience, people need to have passion guiding them to make them resilient to these kinds of people and comments. They cannot let what other people think or say govern their lives.