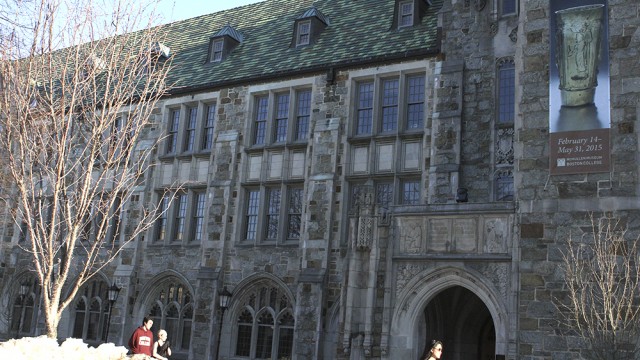 A Salute To The Snow – As winter turns to spring, we’re all going to have to wave goodbye to the snow—all 100-plus inches of it really made our lives interesting for the past couple of months. But now, we’re moving on to even bigger and better things, like green grass and Marathon Monday, and fortunately, we won’t have to be climbing over the slushy black remains of the snow banks as we’re enjoying our day watching runners pass through Mile 21. We would normally say goodbye, snow, but since we know that you’re coming back, for now we say auf wiedersehen. We’re looking forward to seeing you again, just not for awhile.

Light Out Later – Whether we’re leaving the dining hall, our dorm, the Plex, or class, we can’t help but stop for a split second and think, “Oh, it’s still light out.” And as we’re walking to wherever else we have to be, the happiness swells. “Wow, it’s still light out.” The days are looking up. No more of that seasonal depression on the radar. We can dig that.

Plex Emptying Out – Middle of March is upon us, which means that 90 percent of New Year’s Resolutions are officially dead. That’s sad because it means that many are just going to spend another New Year’s Eve feeling sorry for themselves for not living up to the goals that they set last time. But it isn’t all that bad for some of us. Now there isn’t a two and a half hour wait for a treadmill, we can actually get a bench when we need it, and we feel less like we’re in a zoo full of sweaty, grunting teenagers and more like we’re just going to the gym. Chalk a point up for personal space and weights when we need them.

Available Seats In Stokes – You would think that after all the money spent building Stokes, and all of the wide hallways and classrooms tucked all over the place, that they would make the main feature—The Chocolate Bar, peace be to our Lord in the highest—more accessible. But no. Instead, there are so few tables that after 9 a.m. it’s not even worth it to stop by and grab the coffee needed to get through the day. All that being said, when you happen to walk through The Chocolate Bar looking for a seat, and you instead see a wide open table and no one else in sight walking toward it, you begin to question if anything had ever before filled you with so much joy.

Those Pauses – You just got out of class, and you need to go to that thing in an hour and a half, but you could use a late lunch, too. Also, you need to finish that reading so you can participate in your class tomorrow, and maybe you just want to hang out for a while and do nothing, and then you realize you’ve been standing in the middle of the quad, blanking out for five solid minutes.

plex chocolate bar
If You Could Describe Yourself As One Type Of Pasta, What Would It Be?
A Letter To A Younger Feminist