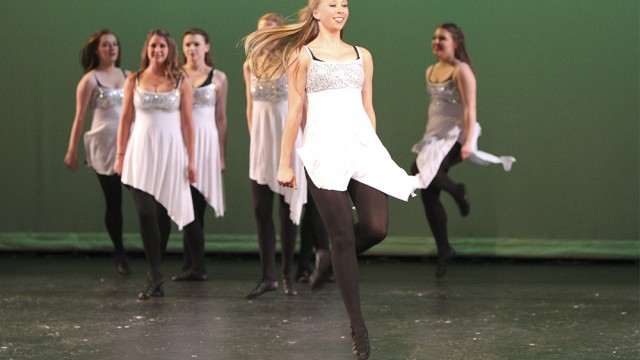 In celebration of St. Patrick’s Day this week, Boston College’s Irish Dance (BCID) held its 8th annual Spring Showcase this weekend. This year’s program, aptly titled “Radiance,” highlighted the group’s vivacity, intricacy, and impressive style both in dance and fashion. The 28-member ensemble along with guest performers, The Acoustics and the Dance Organization of Boston College (DOBC), embodied the picturesque light that the show’s title suggests and flowed seamlessly between more traditional Irish music numbers and more modern pieces.

One of the more impressive features of the show was the shifting colored backdrop projected behind the dancers. Each number, depending on the tone of the song, would have a different colored background that actually matched well with the speed and energy of the dancers. A more playful tone would be paired with a blue or pink backdrop, while a faster, more provocative or active dance would be given a red background. Lighting was shifted to either project shadows across the theater or to transform the dancers into silhouettes on stage. Lighting was a key component to the show and BCID did well to play with its theme in as creative a manner as they did.

The other notable non-dance element of BCID’s performance was the numerous and snazzy outfits each number had. While gold, silver, and white are probably considered necessary to an Irish performance, BCID displayed an array of tie-dye, Celtic patterns, and sequins that played well off of each other and reinforced the show’s concept in an intriguing way. The dresses worked well with the ladies’ movements and added a flow and pizzazz that lent itself to both a more traditional Irish style and a more modern take on the Celtic aesthetic.

Going through almost 20 dances, more than a couple dances might blend together in the mind of the casual viewer, but the dancers’ liveliness and conceptually unique numbers break this mentality. Incorporating the Irish dance style into modern hits like Beyonce’s “Single Ladies” and Mark Ronson’s “Uptown Funk” is an impressive feat, considering the different tone of traditional Irish ballads and modern pop music. There was even a 1980s throwback with Whitney Houston’s “I Wanna Dance With Somebody,” which featured a surprise performance from Baldwin the Eagle, BC’s mascot. The diverse musical styles showcased by BCID kept each number refreshing, despite the overarching similarities dances they enveloped.

The performances from the DOBC and the Acoustics were welcomed variations that added a nice touch to BCID’s program. The Acoustics’ take on The Who’s hit “Baba O’Reilly” was a thrilling deviation from the original sound. While it is hard to imagine the song without its wildly famous rift, the Acoustics did not disappoint. One member’s beatboxing made for an impressive tempo and composition that differed greatly from the sound of the classic hit. The DOBC numbers accentuated the differences in style between the two groups. They move in such different ways that one style seemed almost incomparable to the other and both looked more specialized and intriguing in this light. The complementary performances from the Acoustics and the DOBC were intriguing variances from the BCID program and they fit in well with the theme of radiance.

The most extraordinary number of the program was the “Officers’ Dance” choreographed by Betsy Hughes, A&S ’16. Dancing a cappella, it was put entirely upon the performers to form their own rhythm and sound with their shoes. While its easy to appreciate the synchronization of a dance to a song, nothing is quite as intense and remarkable as the dancers combination of movement and sound in this number. The “Officers’ Dance” expressed the ingenuity of BCID and essence of what Irish dance really is.

Radiance was a splendid showcase of BCID’s talent and devotion to dance. From the Beyonce “Opening” to the more traditional “Irish Rover,” BCID operated across the spectrum of sound, despite its unique style of dance. The accompanying performances from the DOCB and the Acoustics varied from BCID’s specialization and rounded out the program really well. With St. Patrick’s Day this week, BCID invoked an appreciation of Irish heritage and celebration that was both timely and riveting.