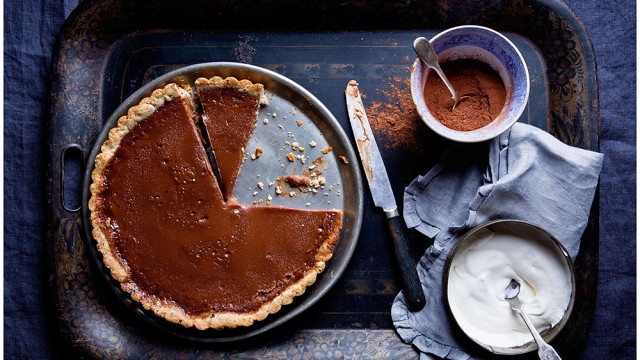 ‘The Voice Of The Food’: Boston-Based Food Stylist Catrine Kelty Shares Love And Food Through Design

atrine Kelty often makes Thanksgiving dinner in July. In the Boston humidity, she roasts and bakes with ovens blasting and meringues quickly growing sticky. Or she will fry flaky, white fish—fish that begs to be eaten on a white picnic table with an August Cape breeze—in February.

But even more disorienting than Kelty cooking off-season food, is how she treats it. Twice-fried cod suddenly becomes as important as Kate Moss’ exit pose on the runway.

A Boston-based food stylist, Kelty works on the schedule of her commercial and editorial clients—everything from Au Bon Pain to The Boston Globe Magazine. This means cooking turkey when it’s 90 degrees out. She is the translator of a client’s vision and describes herself as the voice of the food, aiding the art director and photographer in the making and styling for cookbooks, packaging, and magazine spreads. While everyone else worries about the lighting, the feasibility of the dish, or the cohesiveness of the project, her primary responsibility is pure aesthetics. Kelty makes sure that the cuisine makes the reader’s mouth water.

For most of her clients, Kelty prepares the food and then acts as its makeup artist while the photographer works. Who else would stick up for that helpless souffle under the hot lights? “Everyone knows it deflates but they don’t know how fast,” Kelty said.

Kelty is working on her favorite type of project: a cookbook. She likes the creative freedom it brings. Today, it is a gluten-free spread at America’s Test Kitchen (ATK), a popular show among cooks and the copy that publishes Cooks Illustrated and various cookbooks.

The kitchen smells of a rich, fatty—but not unpleasant—mixture of fried fish and meringue pies. Kelty, a general in a blue, burlap apron, is the center of the action. She is sturdy but soft, with her practically cut hair kept off of her face by her glasses. Her presence gently demands attention. Five chefs, an art director and a photographer, 10 ovens, a computer, lights, wires, and cameras all swirl around her. She waves her spatula, teasing the chefs and photographer while she sets up for the shot, and often laughs from somewhere deep within at the chefs’ banter. Her kind, motherly eyes disappear in her smile and her beautifully symmetrical nose crinkles slightly.

The creative team—photographer Carl Tremblay, art director Taylor Argenzio, and Kelty are waiting for the oil to get to 375 degrees. The whole thing feels like a kitchen during the holidays during downtime, just bigger and brighter. Instead of a mom’s handwritten sticky notes on dishes, there are highlighter yellow signs on speed racks declaring “in progress projects.” Instead of one cake, there are three. Instead of the steady hum of one mixer, there is a cacophony of dozens of little motors working to blend, smooth, and whip.

Kelty and Tremblay slip into French, forgetting themselves for a moment. It is hard for her not to fall into her native tongue on set when her love of food began where her life did. She is the daughter of a butcher and a baker, but thinks that her interest in food would have developed regardless.

But that extra reverence she holds for food, an extra reverence even exceeding the average European’s? That’s all her parents.
“It’s kind of ridiculous sometimes, saying I’ve been around food all the time—everyone has been around food all their lives—but for us food was really important,” she said. Every aspect of the meal was considered, from the cut of meat to the tablecloth. The table setting, plentiful gardens, and farm-raised animals went beyond sustenance, bringing joy and celebration to everyday life. This mentality rooted itself deep within her. The joy food brings her and her love of sharing that joy engulfed Kelty.

Kelty studied film in college in Montreal, where her family moved when she was a child, and then floated through various restaurant jobs to pay the bills while she was starting out. She would seek out the chefs during downtime and they would put her to work while chatting.

“While I was talking he was like, ‘Hey! Peel the garlic,’ or, ‘Do this,’” Kelty said with a chuckle. “And then I’d peel the garlic and he’d be like, ‘That’s not how you peel garlic!’ and so I’d learn tricks.”

These tricks are the basis of Kelty’s profession. Her skilled hands bread the fish at a quick staccato, effortlessly guided only by years of experience, her attention elsewhere as she consults the recipe developer on how to properly fry the fish. Watching Kelty in the kitchen is like watching three or four people at once.

But she doesn’t do everything on her own. That’s the whole point of Kelty’s job—to have a culinary and aesthetic eye in a scenario with many moving parts. She is always paired with a photographer (who focuses on lighting, composition, etc.), an art director (to supervise and unify the vision of the client), and sometimes a prop stylist, if the job is very large and Kelty feels that she needs the extra help.

This job for America’s Test Kitchen (ATK) means a few things for her. ATK’s goal is to provide well-tested, foolproof recipes for the average home cook. This changes Kelty’s job in two ways. First, she does a lot less of the cooking because the chefs there do it. Second, it adds a food editor into the mix. The food editor at ATK must come in and approve the work of the team. This means looking to see if the dish is cooked properly, that the correct utensils were used, that the right ingredients were paired, all those nit-picky yet important foodie details. Sometimes, the entire shoot will be finished and the food editor will come in and notice a tiny detail like the wrong herb or type of spoon in the shot, a detail that means the past few hours of work are rendered useless. And sometimes editors will try to add input on lighting, styling, or other things technically outside their authority.

The actual cooking and styling needs to happen before this input can be given. The balance of the competing visions is delicate and intertwined.

It doesn’t appear that way at all when 375 degrees quickly becomes 377 degrees and the too hot oil spits out of the pumpkin orange pot. There was a flurry of anticipation—cameras hoisted up, grabbing of spoons and fish, gazes pointed to monitors—and then a laugh from Kelty when they realized their mistake. “I should’ve talked less and paid more attention!”

“That should be the name of your memoir,” Argenzio quips.

Kelty throws her head back, chuckling, knocking her funky framed black glasses askew. She pauses for a moment, briskly checking the temperature of the oil, determining it’s not yet the magical moment.

“And the movie will be The Impatient Cook.”

After the fish fries at a successful 375 degrees, Tremblay, Argenzio, and Kelty all crowd around the monitor like expectant parents. They scroll through the pictures, cooing with pleasure at their work.

The finished pieces fish lies on a paper towel, forgotten. Their moment in the spotlight is over, their digital siblings on the monitor are now the most important thing in the room.

About 20 years ago, people did not know what to make of Kelty’s profession. When she said she was a food stylist, the responses would often be jokes.

Few things about her profession remain mysterious now. With the dawn of the Food Network and social media, what used to be behind the scenes is now public. Not that there was much to hide. Almost everything she makes is authentic.

“People are surprised that most of the time that we don’t cheat anything,” she said.

Meat and poultry are the exceptions. Clients can’t wait for a turkey to cook the full four hours, plus when you cook it properly the meat recedes and the skin wrinkles. Kelty sometimes will have to undercook the meat. But there are none of the horrific tricks—shortening for ice cream, motor oil for syrup—that you sometimes read about. She gets to taste almost all of her dishes.

met Kelty through Instagram. My first impression of her was not of a person at all, but rather a mosaic of bites. Her pictures are striking, simple, and elegant: a glass dish that once held chocolate pudding, scraped clean; the pink tail of a fresh fish; a banana peel—the bright yellow and brown blemishes popping on the bright white background. “It’s kind of like my little sketch pad,” she explains. Even though she says her Instagram account is for herself, her followers benefit just as much. The photos, often sandwiched in a newsfeed between someone else’s dog and a selfie, make stomachs rumble and give a glimpse into Kelty’s exciting profession.

Kelty’s banana peel was just as flawed as the one I ate this morning, she just saw the beauty in it. Food is the great connector, one of the few things in which all people share. Kelty knows how to leverage that. Her Instagram makes me think differently about the banana peel I just tossed on the granite, or reminds me of my grandmother’s pudding. That is why the food is the spotlight of her work.

The photographer sets up for a shot of the finished tray of fish. He snaps the test picture. As soon as it appears on the screen, Kelty rushes over to the tray and authoritatively starts rearranging things. “All those crumbs are done on purpose,” she tells me. And then, for the first time in an hour, she stops chattering. She briskly lines up the crumbs to the blueprint only she could see. This mess is of utmost importance.

Because the shoot was at America’s Test Kitchen, everything needed to be exact. Kelty cheerfully got ready to redo the shot since the food editor did not like the initial fry on fish. Despite the creative team’s hour of work evaporating over minimal coloration issues, she leans over to let me know that I should not worry too much.

“We still get to put a little bit of ourselves in there.”

That’s what makes it worth it for Kelty. It’s why she loves to cook and loves to share her food even more. It may not be the traditional sharing that comes from cooking a pie for a neighbor or a large dinner for friends, but the audience reached in her editorial and commercial work is larger than she could ever fit around one table. Even her Instagram invites people she does not even know into her kitchen. We see her vision and get to bask in the enthusiasm for her work that radiates from the snapshots.

Kelty’s pie becomes mine as I scroll through my phone. Just for a moment, I am around the Thanksgiving table with my family, Kelty’s precise hands and pleased smile in the background.