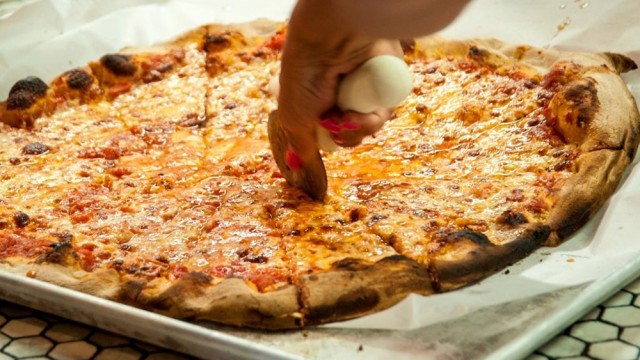 Pepe was born in Maori, Italy, a town southwest of Naples on the Amalfi coast. He was illiterate and had little to his name when he arrived in the United States as a teenager in 1909. What started as a career in baking soon shifted to a pizza business. He established Frank Pepe’s Pizzeria in New Haven, Conn. in 1925. The original location offered only two types of pizza: tomato and anchovy. It has grown to be an award-winning pizzeria.

Today, visitors can still enjoy the original tomato or anchovy pie, but can also choose from a variety of other options, including Pepe’s famous White Clam Pizza. The dish was originally inspired by the Rhode Island clams served locally on the half-shell. The savory special is still made with grated cheese, olive oil, fresh garlic, oregano, and the same fresh clams New Haven residents enjoyed in Pepe’s day.

Since its inception, Pepe’s has been a hit with its customers, and was recently rated as having the No. 1 pizza in America by The Daily Meal in 2013. The pie was also ranked as one of the “13 Most Influential Pizzas of All Time” by TIME Magazine. Frank Pepe’s has quickly become a staple in New Haven, and 2015 marks the restaurant’s 90th anniversary.

In 2006, Frank Pepe’s Pizzeria began the process of expanding upon its lasting success, opening an additional location in Fairfield, Conn. Six additional sites in Connecticut and one in Yonkers, New York followed between 2007 and 2013. As the chain expands, Pepe’s has taken great pains to ensure that the tradition of quality pizza is maintained at each new location.

Jeff Fields, who is in charge of location development for Pepe’s and a dedicated White Clam devotee, credits Frank’s “recipes’ quality of ingredients, and the duplication of the oven” as keys to the company’s success. The ingredients, he says, are the same at every Pepe’s location and are ensured to be fresh. Each Pepe’s restaurant has an identical coal-fired oven, a practice inspired by the founder’s Italian roots. The massive oven, which weighs 52 tons when completed, is hand-constructed by specially trained craftsmen. The use of the oven is a critical part of giving the pizza its signature taste.

Fields also credits Pepe’s expert chefs for the company’s delicious product. “Our pizza makers are as good as anyone, anywhere,” he said. Each goes through an extensive training process, lasting in excess of six weeks. There are three positions in a Pepe’s kitchen. The first is that of the oven operator, the individual charged with keeping the fire going in the enormous kiln. The second is the “banger,” who pounds the dough used to make each pizza. Unlike other pizzerias, Pepe’s does not stretch their dough, and so forgoes the process of spinning pies overhead. The final position is that of the decorator, the individual charged with adding toppings, be they anything from tomatoes to shrimp. Fields notes that each time a new Pepe’s Pizzeria is opened, the key employees chosen for the site are tried and true pizza making veterans, responsible for consistently creating a pizza that is “indistinguishable” from those made in Frank’s original oven back in New Haven.

Despite almost 10 years of expansion in New England and the mid-Atlantic, Pepe’s had yet to put down roots in Massachusetts until recently. Many, including Fields, a former Newton resident, would regularly make the trek from the Greater Boston area down to New Haven for a slice of a Pepe’s. The pizza chain has finally decided to bring their White Clam pie and assorted other pizzas further north. After over a year of scouting, Fields decided on opening the company’s newest restaurant in the Chestnut Hill Mall.

Holding true to quality and continuity, Fields promises that “the people of Chestnut Hill are not gonna get some imitation of Pepe’s,” but a restaurant that lives up to the traditions that define Frank Pepe’s Pizzeria as a brand. The location will be established according to the same model, relying on the expertise of seasoned Pepe’s pizza makers and will feature an oven identical to the seven that preceded it.

The space is a 3,200 square foot, 85 seat restaurant, which Fields says puts it in league with other locations. It will feature parking spaces in the mall’s lot reserved for patrons. Pepe’s Pizzeria wants to make the Chestnut Hill location “as BC friendly as possible,” Fields said. The company hopes to enter talks with Boston College about making payment with an Eagle ID possible. While a specific date has not been set, the restaurant is hoping to open by fall 2015.

“I can say with confidence when you come back to school next fall … you’ll be eating at Pepe’s,” Fields said.

For Boston residents and BC students, the wait is almost over.