Home » Shades Of Grey In Free Speech On Campus 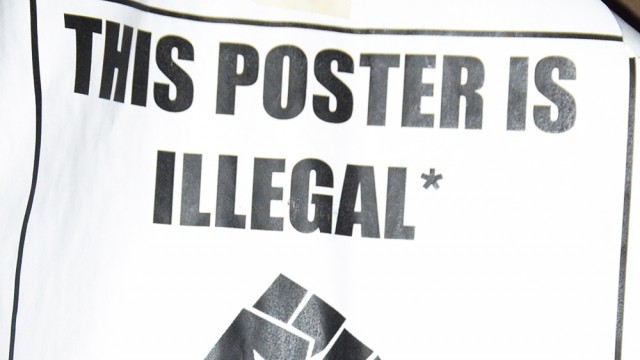 Shades Of Grey In Free Speech On Campus

When Fifty Shades of Grey was pulled from the Boston College Bookstore shelves last week, the administration leapt to its defense. “When we learned about the incident, we urged Follett to reconsider their decision in light of the inappropriateness of removing books from a bookshelf at a university,” University spokesperson Jack Dunn said in an email.

On Monday, an unidentified group of students spread around 500 fliers on campus with the message, “This Poster Is Illegal – Support Free Speech.” Admittedly, these papers proved to be a nuisance for facilities crews, but their point on the bureaucratic mechanisms limiting the dissemination of information on campus holds. Why is it, in a place of commerce, the University is willing to defend free speech, and even criticise the hindrance of it, while in academic buildings and outdoor spaces, the practice of it is very much limited?

The posters were put up without the approval of the Office of Student Involvement (OSI), and such disruptive displays should not become a common occurrence. There is an irony, however, that anything goes in the campus Bookstore, while those looking to express political beliefs in academic spaces are left to navigate several stages of approval, with campus speakers frequently required to sign contracts imposing silence on issues like gay marriage.

Free speech on campus is an admirable goal, and if the University is serious about it, there’s little room for compromise. Currently, the school requires that all events or programs sponsored by student organizations to be consistent with the values and principles espoused by BC as a Jesuit and Catholic University. This is a fair stance for a private institution to take, and in choosing to go to BC, students are in a way accepting that there might be some restrictions placed on their ability to express ideas.

The University should not masquerade around, however, claiming this is an open environment for expression when its policies are designed to actively discourage ideas that conflict with Catholic values. And then there are groups like Climate Justice at Boston College (which advocates for an aggressive stance on climate change very much in line with the views espoused by the Vatican) that are kept from having a formalized role on campus, seemingly for the disruptive nature of their message.

Free expression is not the default. It is not appropriate for every institution, and if the University is truly committed to creating an environment that encourages it, there will need be a new expectation for nuisance. The policies proposed for free speech by the Undergraduate Government of Boston College (UGBC) at the end of last semester would open up the floodgates for the proverbial Monday morning poster dump.

Kindly staged demonstrations and flier postings might not set the world aflame, but they make for prettier campus tours. And moving forward, BC will need to decide just what type of institution it hopes to be. It is possible to have very important conversations within the constraints of Catholic social teaching, but there are also plenty of discussions such a doctrine completely leaves off the table.

When it comes to free speech at BC, for now, there are still plenty of shades of grey.