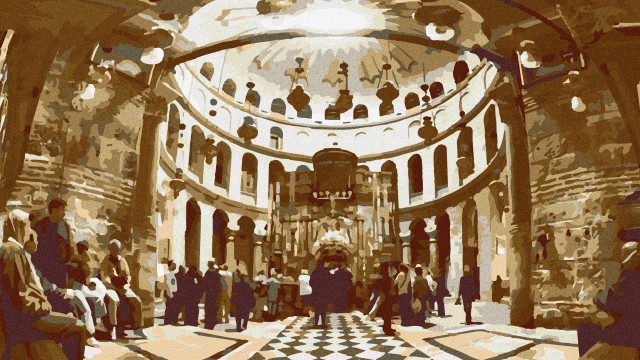 Two weeks ago, I visited Jerusalem’s Church of the Holy Sepulchre—the site where Jesus was crucified, buried, and resurrected. The barren rock where His cross stood still protrudes in the middle of the church, and kneeling before it, I was surrounded by pilgrims of all ethnicities and races. There were Romanian women in long dresses and headscarves, an Ethiopian man with his arms outstretched in prayer, groups of Polish and Italian grandparents, and a mosaic of others whose backgrounds I could not place. The distinctiveness of their whispered languages—the soft and very human notes resonating through the church—struck me profoundly, and filled me with a surprising sense of joy and peace. The diverse multitude praying at the foot of the cross felt right, as if God was smiling down in approval at the sparkling richness of His creation.

Humans, I am convinced, were made to be diverse. Our cultural and linguistic differences are not artificial divisions—rather, they are expressions of what is most deeply and beautifully natural in us. Our dazzlingly dissimilar customs and lifestyles enhance more than just the breadth of human experience—they expand its depth too, accessing aspects of reality that would otherwise remain unexplored.

After all, each individual language and culture offers a distinctive way of looking at the world and nourishing the human spirit. Armenians—who for centuries have had to speak multiple languages in order to survive as a minority in the Middle East—understand this well. One of their most famous proverbs says, “You are as many people as languages you speak.” In each vernacular, you can express sides of yourself that cannot be articulated in your own mother tongue. Multiple factors make this true—the first, of course, is vocabulary. Certain words simply cannot be translated. The Portuguese word “saudade,” for example, expresses a concept similar but not equivalent to nostalgia, and takes an entire paragraph to describe in English. Beyond words themselves, our entire ways of being are shaped by our languages and cultures. Our views of youth and age, duty and leisure, nature and time are all profoundly influenced by our unique cultural norms.

Throughout history, some have proposed that an ideal world would have all of humanity melting together into one homogenous amalgam. While many of us might not fully agree with this sentiment, we have wondered from time to time, “We’re all one human family; why do we have languages and customs that divide us?” Such thoughts can be quite common when reasoning from a religious mindset. The story of the Tower of Babel—the Biblical explanation of linguistic diversity—is often seen as a negative intervention on God’s part, confusing and confounding human unity.

But I think God’s provision for different languages was a wonderful gift. Rather than allowing us to become one unified mass, all sharing the same flaws and weaknesses, He made us incredibly different. If we look around, we cannot help but be reminded that our way of doing things is not necessarily the right way to do them; diversity stymies pride and reminds us of the need for continuous growth. In addition to learning from others, diversity gives us the chance to share and strengthen what makes our own cultures beautiful—which is, in my experience, a deeply joyful and fulfilling process.

Today’s rapidly globalizing world is beset by powerfully homogenizing currents, and the barriers between cultures are dissolving at an unprecedented rate. To some extent, it is good that we seem to be growing less divided. Sharing is truly wonderful. But the problem with homogenization occurs when cultures begin to erode, disappear, or die out. This is an urgent problem: UNESCO currently classifies 473 out of 6,909 living languages as “endangered.” When a culture vanishes, so does a part of humanity. When a language dies, the human vocabulary becomes more impoverished, and we all lose a part of ourselves.

So let us take joy in the cultures we’re part of, energetically preserving, deepening, and enriching human distinctiveness. And let’s celebrate all other cultures, learning as much about them as we can.

religion language
Confessions Of A Bad Catholic
TU/TD: Housing Closes And New Housing Is Up For Sale