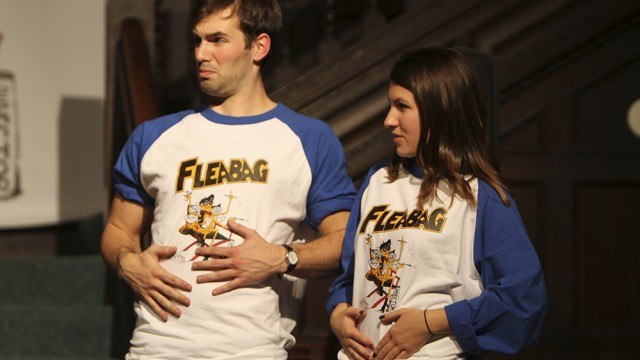 Ending a tradition of 34 years, comedy group My Mother’s Fleabag is leaving the O’Connell House. America’s oldest collegiate improv comedy troupe will move all its performances down the hill to the Vanderslice Cabaret Room, largely in response to an increased enforcement of fire code restrictions, severely limited audience sizes in its historic home. It is the hope of the group’s directors that, this year, audiences won’t be left out in the cold.

Since the group’s inaugural performances a little more than 34 years ago, My Mother’s Fleabag has called the O’Connell House home. It is where it has labored during Hell Week and ultimately where it held its shows. Historically, the O’Connell House has been a beloved location by both members of My Mother’s Fleabag and the audience. The group and the audience squish into the main foyer of the building’s grand staircase room and sit back to hash out some absurd situation.

On its 35th anniversary, improv comedy club My Mother’s Fleabag will be staging its twice annual show outside O’Connell for the first time, in Lower Campus’ Vanderslice Hall.

Until the fall of 2012, the group operated without restrictions in the O’Connell House. In between the fall and spring show, the University started to actively enforce the building’s fire and infrastructure codes, barring students from inhabiting the venue’s balcony area and standing room space. And in succeeding years, seating continued to be cut in O’Connell House to the point where the group had to send back nearly 50 students from the last show.

“We were racking our brains for months, pretty much the whole year, really, just thinking, ‘What are we gonna do?’” Genovese said.

The group had been discussing a possible move from O’Connell House for a few years before its current seniors directors Alex Dzialo, A&S ’15, Sean Bloomstine, A&S ’15, and Genovese ultimately decided switch venues. The three consulted alumni who graduated as recently as last year, as well as older members. They also consulted current members, but in the end the group’s three directors made the decision.

“[The directors] heard a little bit of feedback from all of us, talked to us individually to see if we felt strongly one way or another, and all of us agreed that with the audience and the people that are coming to shows, it’s too hard and too discouraging for people to try to see the shows to have them in O’Connell House because it’s such a small space,” Tatiana Schaefer, A&S ’16, said.

Lou Wilson, a director from last year and BC ’14, said he has always pushed to move to a new venue. He was a junior when the administration began to restrict attendance in O’Connell House. Wilson noted, however, that the O’Connell House will always be the group’s home, and he hopes that it will continue to occasionally perform there.

“As soon the venue became an obstacle to our fans enjoying the shows, something had to give, and it wasn’t going to be the administration, it was on us to rise above it and do what was best,” he said. “I’m proud of this class for making the push, and the rewards will be clear in what should be easier access for our fans.”

When the directors committed to a change of venue, they examined several possibilities. The group considered Robsham Theater, but the space would be far too large for the intimate setting My Mother’s Fleabag needs to interact freely with the crowd. It considered the Bonn Studio, but ultimately decided that the space would be too small. After seeing some shows in the Cabaret Room, the group decided it was just right. It would also allow the group to keep the shows free, which would not have been the case if it had moved into Robsham.

Genovese believes the Cabaret offers several concrete advantages over the O’Connell House. It will seat around 40 more students per show, it has built in sets for lighting and sound, and it is also a central campus location when compared to the O’Connell House.

“We thought, the Vandy Cabaret Room might feel a little different at first, but we’re gonna make it our own,” Genovese said. “As soon as you see the Fleabag banner go up or hear ‘Muscles from Michelle,’ we’re keeping all the same traditions, it’s just going to be a little bit of a new environment.”

On Friday and Saturday students will get the chance to see My Mother’s Fleabag in the Cabaret Room for the first time, though the group has been practicing in the space all semester.

“My Mother’s Fleabag, we call it a wonderful toy, and when you’re a senior, you polish it up and get it ready for the years to come,” Genovese said.

my mothers fleabag
Relay Draws Nearly 1,500 For Eighth Annual Event
Atop The Summit: Google Exec Julie Rollauer, BC ’97, To Return For Own It