The life of Martin Luther King, Jr. exemplifies the tension between faith, influence, and action. Two professors explored this tension in a panel that considered the relationship between Martin Luther King’s work and his Christian faith. This panel, the Veritas Forum, was sponsored by Boston College Alive and the St. Thomas More Society, and hosted on Thursday evening. The panelists were Harvard University professor Nancy Hill and political science professor Alan Wolfe.

The Veritas Forum, with its headquarters in Cambridge, Mass., is a group of university community members throughout the nation and Europe who talk about life’s most difficult questions and Jesus Christ’s relevance to these events.

Hill, who teaches education at Harvard, is a developmental psychologist and a devout Christian herself. She is an expert on the psychology of race and diversity.

Wolfe, a professor of political science here at BC who shared his secular perspective, is not a religious man but has spent a significant amount of time studying religion and writing about it.

Hill began the forum by speaking about faith’s role in King’s mission and death. She pointed out that, in many cases, King quoted the Bible as a model for the way in which we should all live our lives. King’s nonviolent approach to demonstration and his belief in loving the poor, the weak, and the oppressed, as well as the enemy, was grounded in his faith, she said. He believed that Jesus’ ministry reflected this idea. Jesus believed that in loving all people we could find victory. He modeled empathy, and he grieved when things were not right.

“Jesus gave us a vision for the future,” Hill said.

She asserted that these traits that Jesus encompassed were also traits that King himself possessed. He hoped to spread his ideas to the American people in order to end racism, segregation and oppression, just as Jesus called on his disciples to concern themselves with the oppressed, the poor, and the foreigners.

Hill added that Christianity is not tied to Western Culture. The religion originated in the Middle East and had diverse followers. Christianity, she believes, is therefore designed to embrace diversity.

Jesus and Christianity, she said, are models for the kind of worldview we all should have.

Wolfe began by stating that he had actually gone and listened to King preach in a church in Nashville in 1963. He brought along his mother, who had come down to bail him out of jail after he and other protesters had been arrested. He said that King’s speech changed his Jewish mother for life—she could not stop talking about his incredible ability to preach.

Wolfe believes that King was deeply tied to Greek traditions. He traveled and preached like Odysseus, Wolfe said, and he was not afraid.
Greeks highly valued courage and stoicism, both of which King possessed. These values, Wolfe said, come from Greek culture, which originated long before Christianity.

The ideas of the Enlightenment and the American Creed also influenced King, Wolfe said. He pointed out that many of the founding fathers were deists, if anything.

And finally, he noted all the non-Christians had a large impact on King—Rabbis marched with King at Selma. Many Jewish people, said Wolfe, had an influence on King, including his main advisor. King was influenced both by the Jewish Old Testament and the Christian New Testament, said Wolfe. And King’s great mentor was a Hindu—Mahatma Gandhi.

Looking at the world today—50 years after King’s era—Hill sees that major advances have been made but there is still room for improvement. She sees hope in the fact that people are gathering together and talking about these issues.

Hill also pointed out that high school graduation rates among the black community have risen over the past several years. Her daughter, who was only nine when the primaries for the 2008 election were going on, was shocked to learn that Barack Obama was the first African-American president.

“King was inspired by many, many sources,” Wolfe said. “I don’t think that King could have ever become the leader that every American of every race sees him to be without that generosity of spirit that came from having so many religions influence him.” 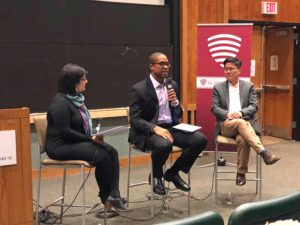