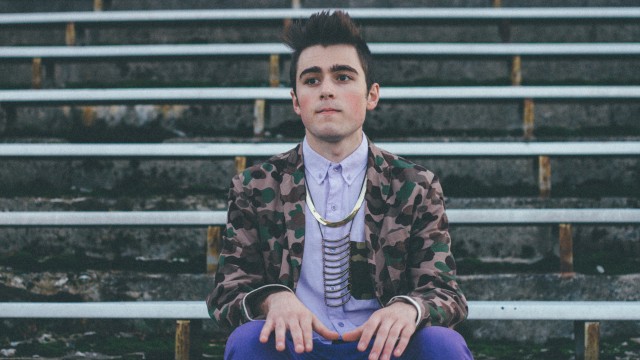 Textbooks and stray pages of class notes are scattered on the floor, finding space between the piano, guitar, and drums. The bed is unmade, and the rest of the room’s appearance appears completely secondary to the professional equipment finding a home within it: an expensive microphone rig, sound equipment, booming speakers. It is a Friday afternoon, and William Bolton, CSOM ’16, is in the recording studio that doubles as his bedroom.

As unreleased tracks from his upcoming album, Love Supreme, play on the stereo system, Bolton takes turns singing and strumming the guitar, illustrating how he creates the sound element to his songs. It has been a busy few months for the aspiring musician, spending time refining his sound, crafting his upcoming album, and taking steps to create a brand and plan out the business side of his musical career.

“Basically, I’ve been releasing music on SoundCloud for about a year and a half,” Bolton said. “I have about 750,000 total plays on SoundCloud right now, which is completely by myself—no manager, no label, no marketing budget.”

While he has enjoyed considerable success from fans around the globe using the online streaming service, Bolton believes the next step in his career is to achieve the popularity necessary to go on tour.

“In the modern music industry, you want to get to the point where you’re able to headline your own tours because the majority of the money in the music industry is actually coming from live shows and merchandise,” he said. “Touring is the big goal, but the way you do that is by getting a following online.”

With this in mind, Bolton went to Los Angeles over Spring Break with a few goals on his agenda: the filming of three music videos for songs on his upcoming album, as well as multiple meetings with potential managers and record labels. For the videos, Bolton explained that the idea was to help both current and potential fans get to know him better—in ways that are sometimes difficult when only listening to his music.

“We’re really just creating a brand, and branding me as William Bolton,” he said. “The music’s there, but what really makes people attached to an artist is the video. This is how an artist looks, this is how he sings—in a way, it’s like being able to interact with the artist on screen.”

Bolton worked with Jacob Owens, a popular director in the Los Angeles music scene. The three songs were shot in a variety of locations in Southern California, each with the hope of capturing the perfect mood to accompany the music. For “Bad Girl,” Owens filmed at the iconic Pink Motel, in a video that features Bolton courting Miss California.

While Los Angeles made sense as a filming location due to its proximity to managers and labels, Bolton says it is also representative of his larger musical focus—one that deals with a rebirth of Motown, the record company that moved from Detroit to Los Angeles in 1972 and featured music that helped integrate a country that was still largely racially divided. Bolton, a native of the Detroit area, views filming in Los Angeles as symbolic of his interest in bringing back the popularity of Motown music in a modern context.

“The rebirth of Motown is so important to me,” he said. “Motown came out in the ’60s and early ’70s as this black music that everyone was listening to, and it was one of the first times you could go to a concert and black and white people would be integrated, dancing with each other and having fun. What I really want to do as an artist is make music, American music, that everyone can relate to and enjoy.”

As Bolton works toward this sound he imagines creating (something he feels he has accomplished with his upcoming album), he also continues to explore ways to build his brand and gain the fanbase required to stage a successful tour.

“We’re in the process of shopping all of my new songs and new videos to different labels and different management groups to try and figure out who is the best team we can put together to make sure this does well online,” Bolton said.

While most would assume the logical path for an artist to take would be to start putting music on platforms like iTunes and Spotify to create revenue streams, Bolton is pursuing a decidedly different path as he begins to monetize.

Using a mobile application called DMM, Bolton has access to 3000 of his fans that use the platform to download his music, as well as all of their contact information and the ability to interact with them through text messages, phone calls, and emails. The application allows Bolton to view every fan on a map as well, letting him see the regions globally in which he’s most popular. He frequently uses the application to message fans that have downloaded his music, in an effort to cultivate relationships and retain them over longer periods of time.

Fans can currently download Bolton’s music within the application for free, though he envisions using it in the future when he begins to charge money. Unlike platforms such as iTunes and Amazon, DMM will allow him access to much more user data as well as much higher proceeds from each album sale. He admits this may lead to fewer total album sales, at least initially, but he thinks this strategy will allow him to build stronger relationships with fans that may very well mean longer term buyers and more total lifetime revenue.

“The big thing is finding a management group or a label that is in line with this strategy, because it’s completely new and not many people are doing it,” he said. While certain high profile artists like 50 Cent, Talib Kweli, and the application’s creator, Ryan Leslie, put their music on DMM, it is still relatively new and working to gain traction amongst both musicians and fans. Bolton foresees using the new videos and upcoming album to continue gaining popularity on platforms like SoundCloud and YouTube, and eventually using that popularity to drive traffic to DMM.

“The last couple months, I’ve been spending so much time on the business aspect,” Bolton said. “But for me, doing the business is directly related to the art. Me being able to control and own my own business is going to allow me to maintain my creative freedom, and that’s what’s most important to me.”

As he continues to walk the line between perfecting his music and building his business, Bolton finds himself in the busiest time of his young career. Amid meetings with potential managers and labels, he hopes to finalize and release the three new music videos and the full Love Supreme album at some point within the next two months.

“As far as all the releases, what we are doing over the next month is meeting with a bunch of managers and labels and figuring out the best fit,” he said. “Once we find the right team, it’s about how we want to release the videos and the new songs.”

Bolton’s biggest hit thus far has been the title track to his previous album, Summer Breeze. In making Love Supreme, he has taken a slightly different, yet familiar, tone in his work.

For now, Bolton appreciates moments back in his pseudo-bedroom, mostly studio, away from the frequently invigorating, and similarly stressful task of building his career. He plays beats, sings the words that come to his head, and strums the guitar to capture the feel of the moment. Just like that, another track is in the works.

“My favorite part of music is the creating,” he said. “The feeling of making something and putting emotions in music is the best in the world. I want to make sure that I can keep doing that.”

music william bolton
A Crisis Of Confidence In The Crusade Against Sexual Assault At BC
Calendar Conundrum: Developing A Better Way To Access BC Campus Events