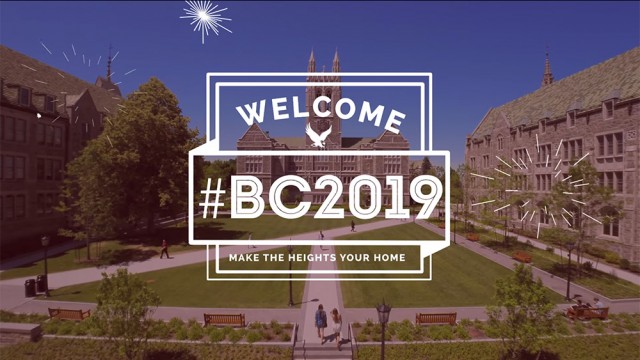 Last week, Boston College released a welcome video to the Class of 2019. While the video highlighted the best aspects of being a student here, it’s more telling for what it did not show. It did not show LGBTQ students who do not feel welcomed or supported; it did not show students of color who feel betrayed after being issued disciplinary sanctions for protesting racial injustice; and it did not show students who have been silenced because they are not members of recognized student organizations. To be clear, I’m not suggesting BC betray the principles of Marketing 101 and start highlighting its shortcomings, but what is disconcerting is the University’s sustained efforts to stifle any conversation on campus that might contradict the idealized campus portrayed in that video. As Friday’s “Rights on the Heights” rally showed, BC’s stifling of free speech, forms of censorship, and limits on expression are harming all students—including those who were shown in the welcome video.

Unfortunately, the debate over free speech and expression has been incorrectly framed and thus incorrectly analyzed. As it stands, the debate has been between students and administrators in the Division of Student Affairs. This has resulted in three problems: First, it fails to consider all campus constituents; second, it’s limited to a discussion of student rights; and third, it assumes religion and free speech and expression are, in large part, incompatible. The purpose of this letter is to address each of those mistakes.

Adopting a free speech and expression policy isn’t just about changing the Code of Conduct. Yes, it is true that the Dean’s Office must reconsider the limits it places on free speech: the demonstration policy and the requirement that all materials get pre-approved by the administration before distribution are wrong. That said, free speech and expression is a principle that extends beyond the walls of the Dean’s Office and affects everyone at BC including faculty. Life outside the classroom is linked with learning inside the classroom, and vice-versa. After all, if BC doesn’t value free speech and expression for students, does it really value academic freedom for professors? Students and professors have different roles—and thus different rights and protections—but the link between the two groups is inseparable. Just take, for example, BC’s insistence that some speakers have clauses in their contracts forbidding the discussion of certain topics: Does this not seem to run contrary to both free speech and academic freedom?

Along those same lines, it is important to debunk the notion that the administration must preserve and protect BC’s identity by restricting free speech and expression. As an institution, BC is shaped and guided by its trustees, students, faculty, alumni, reputation, history, mission, values, and administration. In this context, then, it seems wholly inappropriate that the administration, which is only one component of BC, has decided that it and it alone can determine what is consistent with BC’s Jesuit, Catholic identity. The only way BC will clarify and fulfill its identity, mission, and purpose, as well as improve in all aspects, is by engaging with its plurality of constituents—which only comes, of course, through robust free speech and expression.

Secondly, free speech and expression isn’t just about expanding student rights. It is a principle rooted in the values of a community. Put simply, it is not enough for the Dean’s Office to suddenly reverse course and “give” students the right to free speech and expression. Instead, BC must truly value free and open inquiry, public debate, discourse, and discussion, and an untrammeled exchange of ideas and opinions between all campus constituents in all areas of campus. This will only come once the tone is set at the top, as well as at the bottom. The University’s top officials must signal that, in terms of both academics and student life, free speech and expression is a core value of BC, and students and faculty must respond accordingly by creating forums for exchanges that are befitting of our community.

Lastly, it is essential to see that faith and reason—as espoused through free speech and expression—are compatible. Time and again, we have heard that—in the name of BC’s Jesuit, Catholic tradition—speech and expression must be restricted; this is false. BC is both a religious institution and a university; these aspects of its identity do not need to be mutually exclusive or in conflict with each other. For example, it is true that BC cannot prescribe to certain views or advocate in certain ways, but that does not mean it cannot allow members of its community to engage in thoughtful conversation. Free speech and expression is central to a university: it adds rigor to intellectual debates, it promotes consideration of varying and differing viewpoints, it forces one to confront personal biases, and it leads to understanding. As Billy Shyne, a speaker at the rally, put it, “We need to talk to understand and we need to understand in order to respect.”

Catholicism offers the world already known truths, but the purpose of a university is to consistently seek the truth. This general statement reveals the tension that is playing out at BC; however, it need not be the case. The great Islamic philosopher Averroes, in trying to defend philosophy’s coexistence with Islam, once wrote, “Truth does not oppose truth, but accords with it and bears witness to it.” In other words, while Catholicism does offer us certain truths, there is always room for greater clarification and analysis, which comes from free speech and expression. Indeed, the original Catholic universities of Medieval times were designed to clarify and develop new Catholic doctrines, proving that faith and reason are compatible.

Relatedly, Averroes also argued that the “friends” of religion—that is, those who seek to defend religion from others whose views appear to be different—are the ones who hurt religion the most. In trying to defend BC’s Jesuit, Catholic identity, the administration reinforces false notions that faith and reason are incompatible, that Catholicism isn’t welcoming of all, and that religion is a tool of oppression. This is not necessarily the intent of the administration, but it is the effect and it must change.

To create an intellectually rigorous, welcoming, and authentic campus—like the one portrayed in the welcome video—BC must protect free speech and expression in writing, preserve it through action, and value it in spirit. But first, we need to change the terms of the debate.

Image Courtesy of BC Office of News and Public Affairs