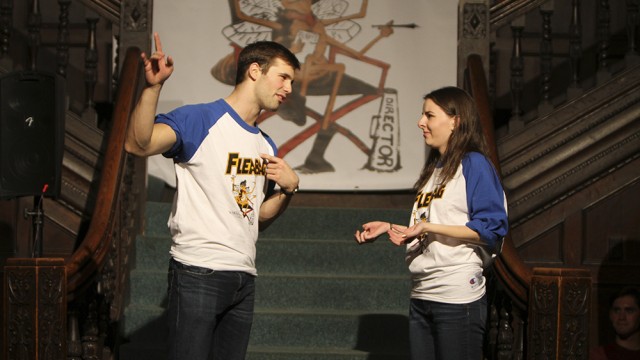 Much like an excited freshman clique of eight, the comedy group My Mother’s Fleabag is moving from Upper Campus to Lower Campus. The group has been headquartered in O’Connell House for the past 35 years, but responding to tighter enforcement of fire codes in the historic building and the sustained popularity of its shows, Fleabag will now be moving to the Vanderslice Cabaret Room. The group has been asked to make this move in the past, but did not choose to do so until this year.

This represents a change in a comedy tradition that includes several notable Boston College alumni, including Amy Poehler, BC ’93. My Mother’s Fleabag is America’s oldest collegiate improv comedy troupe, and the shift in location means that this tradition will be slightly different.

The O’Connell House is intimate and small, but also exclusive—the troupe has been forced to turn away 40 to 50 people each show in recent years, ever since BC has begun to enforce fire and safety building codes. With this in mind, the Cabaret Room will offer more space at the expense of the O’Connell House’s smaller, more private experience.

Ultimately, this shift is a positive move for the comedy troupe, despite its several downsides. One of the most significant benefits of the move is that more people will be able to see the show. Within the group, there was not much dissent about the change, perhaps because it has become increasingly clear that something needed to be done. Director Patrick Genovese, A&S ’15, noted that this move brings My Mother’s Fleabag into the new century.

The traditions held close by those in the group will still be there—like the Fleabag banner—but the move will ultimately serve to further the troupe’s goals on the eve of their 35th anniversary. Prior to settling on the Cabaret Room, the directors considered other venues, including Robsham Theater and the Bonn Studio. Both of those were rejected for size and/or cost concerns, and ultimately the Cabaret Room was decided on.

Most importantly, the Cabaret room has an open floor plan and balconies, like the O’Connell House. This means that the integrity of the performance space will be maintained while allowing more students to enjoy the show. This preserves the tradition of My Mother’s Fleabag freely interacting with the crowd, which would not have been possible in Robsham Theater.

The O’Connell House is in the center of Upper Campus, surrounded by freshman and is comparatively far away from non-residents of Upper Campus and College Road. The Cabaret Room, which can seat around 40 more people per show, is in Vanderslice Hall in the middle of Lower Campus. This centralized location means that the already well-attended show will likely see an increase in popularity—and now, with more seats, no one will get left out in the cold.