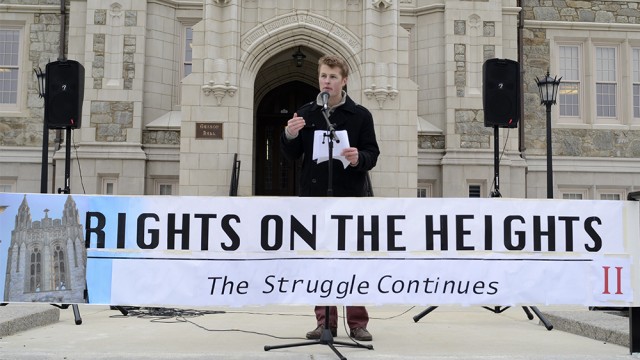 Nearly 100 students gathered in front of Gasson Hall on Friday afternoon for the rally that was hosted by the College Democrats and the Social Justice Coalition. It featured speakers from the Undergraduate Government of Boston College, Climate Justice at Boston College, Spoken Word, Students for Sexual Health, and the GLBTQ Leadership Council, as well as a performance by the Acoustics.

The rally demonstrated the power that this style of open assembly can have on campus. It brought together a group of students who were passionate enough to spend their afternoon in the cold speaking on issues that they have with the administration.

Most importantly, the rally was out in the open, not behind closed doors in an obscure classroom. The only students who attend meetings in classrooms are students already interested in the cause. It sends a powerful statement to other students that the rally was visible and audible to anyone walking across campus.

To impact policies regarding the formation of clubs, the staging of events, and the dissemination of information on campus, it is critical for these style of displays to take place and inspire concern outside the membership of the few advocacy groups on campus. A vision that belongs to a small group of student leaders, one which will completely turn over in four years time, cannot stand the test of time. For there to be a dynamism in the campaign for policy change, student advocacy needs to grow into a self-perpetuating culture at BC.

Smaller, non-registered clubs like Students for Sexual Health and Climate Justice, need to focus on finding roots and making sure their goals and ideas are picked up and continued after the original students graduate. Students are much more likely to see success if they establish strong ties to the issues and pass them on to equally passionate students after they graduate.

The focus of these groups in their early stages should be to establish a culture that will remain even after the founders have graduated. To change policies, students must be persistent.

By allowing the rally, even after the other non-registered protests that took place in the prior months, the administration showed they can be receptive to hearing students’ issues. This is a positive step toward the University more fully addressing its students’ concerns, though the path to long-term policy change is still fraught with challenges.

rights on the heights
Laughing Medusa, The Music Guild, And The Art Club Share A Date In McElroy
The Acoustics Find Their Inner Dinosaur For ‘Jurassic Parkapella’