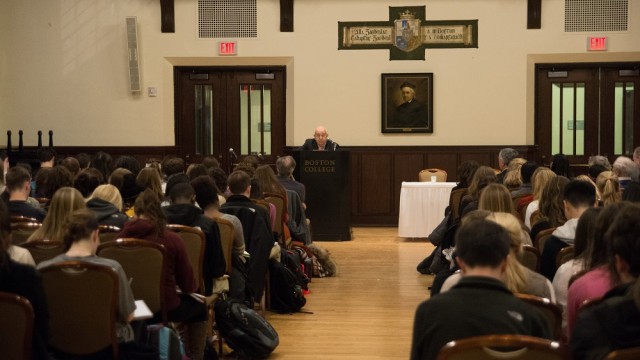 Ira Berlin examined the long process of emancipation in his Lowell Humanities Series talk Wednesday night. His work looks at slavery as a complex institution, not just as something simply outlawed by one document and constitutional amendment.

Berlin, who has written extensively on the subject, is the recipient of the Bancroft Prize, the Frederick Douglass Book Prize, and is the founding editor of the Freedmen and Southern Society for History in the Federal Government. In 2004, he was elected a member of the American Academy of Arts and Sciences, and was the president of the Organization of American Historians.

He began his lecture by stressing the importance of studying the past when talking about race relations today, and of viewing emancipation as a gradual, nonlinear process influenced by religion, politics, economics, and social factors.

He contrasted the popular argument of how emancipation became a reality with one that scrupulously looks at the complex history. This is significant because when the 150 year anniversaries of the Emancipation Proclamation and the 13th Amendment happen soon, there will be much written about the historical events and their impact today, and a renewed interest in the subject.

Berlin argues that although these are times for celebration of achievements, we might be better served to consider them as two events in the century long process of emancipation.

“It comes apart in pieces,” he said about the institution of slavery. “It proved to be a leaky vessel.”

Berlin brought up the fact that about one in eight African-Americans were free before the civil war, as many escaped to the North and to Western territories, or even stayed in the South and began lives as free men. He said that although this fact contradicts our conventional understanding of emancipation and the Civil War by complicating the narrative. It shows that freedom was really something achieved over a long period of time. This view can help to better understand the arguments against slavery and why they became popular, he said.

He begins the narrative with Vermont abolishing slavery in 1777, and then stating that “significant social change extends over generations.” One source of anti-slavery sentiment came from Quakerism which has equality at its core. Evangelicalism argued that God created all men to be equal, an idea that many supported. Often the most passionate abolitionists were those who had experienced or seen the horrors of slavery firsthand.

Berlin also examined the dynamics of freed slaves versus slaves, explaining their different motivations for freedom, or for staying in their current situation. While many slaves risked their lives for freedom, others were willing to accept small improvements in order to maintain their safety, or to stay with family members. In contrast, those who had successfully taken the risk were the least likely to accept compromises in the abolitionist movement, he said.

Berlin went on to examine the arguments used for emancipation, like the Bible and Declaration of Independence. What slave owners essentially feared, he said, was not emancipation, but equalization of slaves in society.