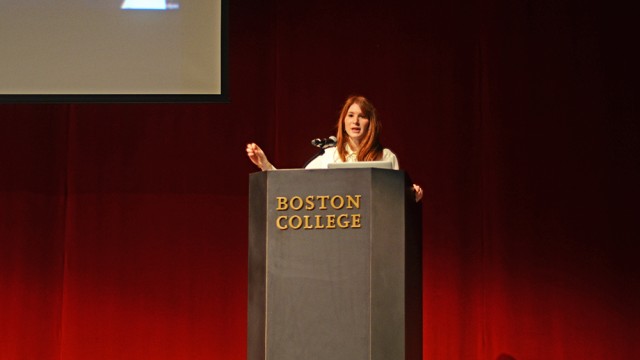 “When you match people who know what they’re doing, who have experience, with young, passionate, hardworking entrepreneurs who care about giving back to the world, it’s pretty incredible what a catalyst we can create together.”

In 2012 and at the age of 26, Carrie Rich—then the senior director of vision translation at Inova Health System—received a gift of $100 from her boss to use toward her cause of choice. Rich then reached out to her entire address book, emailing each of her contacts and asking that he or she contribute to help her reach a goal of $6,000, money she would split evenly between six organizations with which she had previously volunteered. Two weeks and $6,052 later, an anonymous donor put forth $1 million—a sum that her boss then matched.

With this unprecedented amount of money, Rich co-founded and is now the CEO of The Global Good Fund, an organization that measures and accelerates the development of young, social entrepreneurs—60 percent of whom are women—and their impact on the surrounding world through investment, networking, and mentorship. The Global Good Fund subsequently inspired Rich to co-author the nationally reputable, Handelsblatt’s Top 5 Business Book, Sustainability for Healthcare Management: A Leadership Imperative—together, two feats through which she has earned the POLITICO Women Who Rule Award, the Stevie Award for Women in Business, the Asian Social Innovation CEO of the Year award, and publication in Under30CEO, The Huffington Post, and Forbes, among other honors.

On Sunday, Rich delivered the first of two keynote speeches during the Boston College Women’s Summit: Own It, descanting on the strategic notion that discovering, growing, and empowering leaders will foster solutions to complex social problems and ultimately achieve “the global good.” Captivating the audience throughout the entirety of her 30-minute speech, Rich discussed her journey to The Global Good Fund, replete with trials and tribulations, successes and failures along the way.

Since the age of 14 when she and her friends co-founded a Jamaica-based nonprofit that aimed to increase literacy through educational partnerships, Rich has shown a passion for global entrepreneurship. She spoke about many challenging and uncomfortable experiences: joining the step team despite her ballet background and status as a racial minority at 18; co-founding and working for a jersey-cleaning franchise at 19; being accused of unfounded plagiarism by her mentor when she was an adjunct faculty member at Georgetown University at 24; and—what she cited as a particularly significant adversity—being accused of sleeping with her boss to get to her position at 27.

“So, I had a choice—I mean, I felt like I wanted to either cry or scream, and both would have been fine—but at the same time 200 Nigerian girls were taken from their families,” Rich said. “And I thought, ‘You know, my plight isn’t so bad here.’ So, the biggest thing I could do was hold my head high, have integrity, and demonstrate why I was there in the first place, why I deserved to be where I was. And that’s what I continued to do, and I ended up over the next six months getting promotion opportunities with other people in the company.”

Today, Rich and The Global Good Fund seek high-potential entrepreneurs across the globe who are passionate about effecting positive change—in areas ranging from healthcare sustainability and infrastructure to rural education and unemployment—for 15-month fellowships wherein an individual is paired with an expert in his or her field. “When you match people who know what they’re doing, who have experience, with young, passionate, hardworking entrepreneurs who care about giving back to the world, it’s pretty incredible what a catalyst we can create together.”

Rich emphasized the necessity of partnership, discipline, surrounding oneself with inspirational people who will empower him or her, and going the extra mile throughout one’s career—and life as a whole. When faced with adversity, she urges individuals to focus on expressing gratitude and pursuing one’s own passions despite what other people think. “When you choose to put your heart and soul into things, there will be people who want you to fail,” she said. “You just need to hold your head high with integrity.”