Home » School For Sale: Boston College Leans Towards The Money 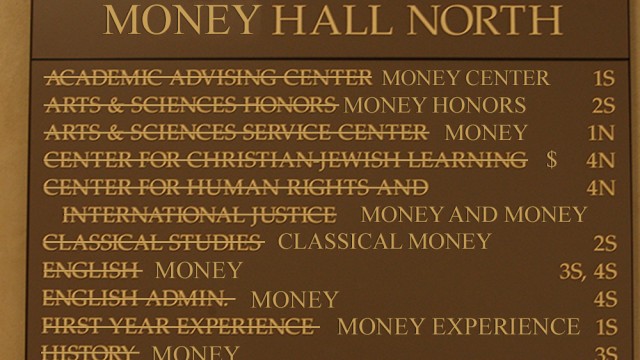 School For Sale: Boston College Leans Towards The Money

Boston College recently announced that the College of Arts and Sciences will be renamed the Robert J. Morrissey College of Arts and Sciences, in honor of alumnus and former University trustee Robert J. Morrissey, BC ‘60. Morrissey is also the largest financial benefactor in the University’s history. The renaming of the College of Arts and Sciences is only the latest in a disturbing trend of University branding.  The vast majority of older campus buildings were not named for or by wealthy benefactors, but rather for major figures in the University’s and the Jesuits’ history. Bapst, Gasson, Devlin, Fulton, and Lyons all bear the names of early Presidents of Boston College. McElroy is named for one of BC’s founders, and McGuinn for the Jesuit brothers and BC faculty members who helped found the School of Social Work. Dormitories on Upper Campus and College Road bear the names of Jesuit saints like St. Peter Claver and St. Aloysius Gonzaga, and of Boston Archbishops like William Cardinal O’Connell and Cardinal Humberto Medeiros.

Recent decades have seen a marked shift in BC’s naming practices, as nearly all newer campus buildings have been dedicated to those who made major financial contributions to the University: Voute, Gabelli, Merkert, Vanderslice, Corcoran Commons, Maloney, Yawkey, Stayer, and Stokes all bear the names of University benefactors. Perhaps most disturbingly, since 2000 four of BC’s constituent schools have been renamed either for or by wealthy benefactors. Prior to that, only the School of Management had attached a benefactor’s name to the school. Further, even the renaming of the Woods School for Rev. James A. Woods, S.J., was done only at the behest of a wealthy benefactor.

BC encourages its students to be men and women for others, to set the world aflame. Yet BC’s own actions are at odds with its message, as the university continues to privilege and recognize only financial contributions. BC has gone from being a school that honored those who made particularly important contributions to its history, tradition, and spirit to one that honors those who make particularly important contributions to its coffers.

This is not to trivialize the generous contributions of University benefactors like Mr. Morrissey. However, generosity is not merely a matter of dollars and cents. Investment in and dedication to BC, its values, and its mission can and should take many forms, and BC should acknowledge and celebrate such diversity. It is particularly pernicious that the consistent privileging of the monetary contributions made by wealthy white men and their families masks not only the diversity of forms that generosity and dedication can take, but also masks and trivializes the diversity of the BC community itself.

At BC, we are taught to be generous of ourselves, generous with our time, our energy, and our compassion. We are called to be dedicated to our work, our communities, and our world. We are asked to invest our time, our lives, and our very souls in our vocations. At a University that prides itself on its Jesuit values and mission, it is both shameful and disappointing that the generosity, dedication, and investment of its students and graduates—in all of their diversity—seem to be considered worthy of recognition only if a check is enclosed.

Jeffrey Stokes is an op-ed contributor for The Heights. He can be reached at [email protected]

9 COMMENTS ON THIS POST To “School For Sale: Boston College Leans Towards The Money”