Home » Soloists, Saxophones, And Strings Stand Out In BC bOpFLIX 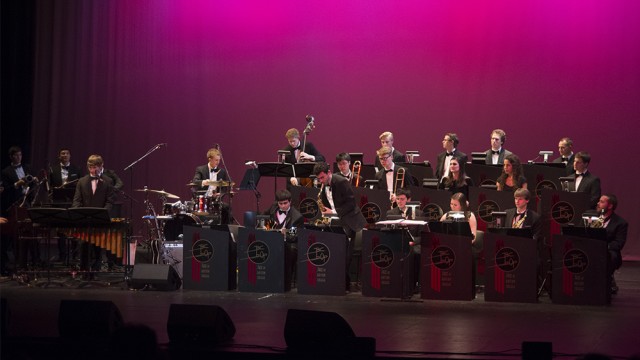 Soloists, Saxophones, And Strings Stand Out In BC bOpFLIX

“Don’t just play the music—feel it,” Andrew Jones, A&S ’15, shouted during his brief speech in the second act of bOpFLIX, quoting BC bOp!’s general manager Sebastian Bonaiuto. This Saturday, bOp! lived up to that motto. Strutting a collection of jazz classics and contemporary covers, Boston College’s jazz ensemble brought down Robsham with thunderous applause and scintillating songs.

What’s most impressive about bOp! is its stunning presentation of individual talent. Whether it’s the jazz ensemble’s soulful singers, mesmerizing sax aficionados, passionate trombonists and trumpeters, or the myriad of percussionists and bassists, practically all members were given a chance to show off their skills. Particularly, the saxophonists’ solos, interspersed into almost every song in the set, were enrapturing. There’s really nothing quite like a howling saxophone and the five specialists really knew how to make them roar. Marie Peduto, A&S  ’18, stood out among her colleagues in songs like “A Penthouse Dawn” and Stevie Wonder’s “Don’t You Worry ‘Bout A Thing.”

A major highlight for the instrumentalists was the fourth track in the set, “Whims of Chambers.” This was Isaiah Anderson’s, A&S ’17, moment to shine on the bass. Steven Ruse, A&S ’16, followed Anderson with a great piano solo. This song featured a more old-timey jazz tone than most of the set’s other pieces and the tonal shift was warmly welcomed.

The vocalists, alternating every other song of the performance, exhibited their collective and individual ability as well. The instrumentalists even got to sing a few lines in the show’s opening number, “Smack Dab in the Middle.” Another great collaboration by the instrumentalists and the vocalists involved Andrew Jones, A&S ‘15, and Marian Wyman, A&S ’18, and a decked out “Doo-Wop” trio performing an iteration of Meghan Trainor’s “All About That Bass.” These segments were irresistible fun and the audience really got a kick out of the golden clad trio consisting of Mike Mastellone, CSOM ’18, Matt Hewett, A&S ’16, and John Robertson, A&S ’16.

Coming back from intermission, a couple members from the ensemble came together for a beautiful rendition of Van Morrison’s beloved “Moondance.” Adam Fung, A&S ’16, and Anne Wilder, CSOM ’16, were the stars of the cover, delivering the renowned chorus with excellent tone and pitch. The pace of the song might have been a bit quicker than fans of the song might have predicted, but bOp! didn’t fail to impress with its immaculate cover.

Speaking of covers, Mike Mastellone performed his distinguishable and outstanding cover of Frankie Valli’s timeless hit “Can’t Take My Eyes Off You.” It’s really chilling to hear this ballad belted out with such force and conviction. Mastellone had the audience in the palm of his hand, shouting and cheering with unmatched fervor. Hopefully Mastellone finds another hit that he can make entirely his own. If “Can’t Take My Eyes Off You” is just the first he takes on, who knows what he can do with a few more classics under his belt?

While hearing “Can’t Take My Eyes Off You” again was a complete delight, bOpflix did seem to rely a little heavily on the jazz ensemble’s standard repertoire. If you’ve been to bOp! show before, doubtlessly you recognized a few songs from that set. Granted, that show might have featured a smaller venue, but fans of the ensemble might have wanted to hear a little bit less of what the group has already performed.

The advertisements for bOpFLIX were extremely alluring. Posters of members inspired by It’s Always Sunny in Philadelphia, Saved by The Bell!, and House of Cards looked amazing and promoted the show really well. Taking on a funky theme and advertisement added a nice touch to the group’s character and creativity.

For bOpFLIX, BC bOp! delivered on all fronts. Displaying its eclectic and impressive range of personal and group talent, the jazz ensemble held nothing back. BC bOp! traversed the spectrum of jazz, going from more canonical jazz classics to contemporary pieces like Trainor’s “All About That Bass” and Morrison’s “Moondance.” Apparently, bOp! has discovered the secret of how to collectively feel the music that they perform.

bc b0p!
David Robert Mitchell’s Indie ‘It Follows’ Traces The Footsteps Of Retro Horror
Boy-Meets-Alien Yet Again in DreamWorks ‘Home’