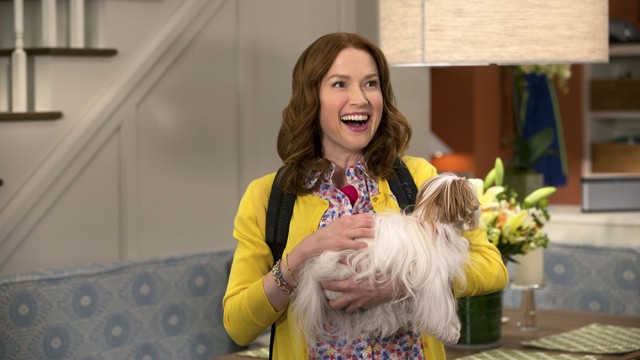 Although binge-watching shows on Netflix is probably not the healthiest habit I’ve picked up while in college, I do from time to time find myself holed up in my room watching hours of TV. I am not ashamed to say that this past weekend, I watched all 13 episodes, the entire first season, of Netflix’s newest show Unbreakable Kimmy Schmidt.

Left with a tiny hole in my heart after the series finale of Parks and Recreation, I was in desperate need of a new show to occupy my time. Although I probably should have spaced out the episodes of Kimmy Schmidt, the show is working to slowly repair the hole left by Parks and Recreation. After all, who could ever hate anything produced by the amazingly talented Tina Fey?

In one of her first starring roles, Ellie Kemper (Bridesmaids, The Office) plays Kimmy Schmidt, a 29-year-old woman who, along with three other women, was imprisoned by a cult leader in an underground bunker for 15 years. She has just been released from the bunker in a small town in Indiana. Although this seems like a pretty dismal storyline for a half-hour sitcom, Kimmy Schmidt somehow manages to turn a depressing tale of confinement into a witty, laugh-out-loud, insightful story of independence, strength, and finding who you truly are.

Kimmy Schmidt struck a chord with me from the very beginning of the theme song (which, in a nod to America’s strange obsession with zany news interviewees, presents itself in the form of an auto-tuned news interview of a man talking about the release of the “Mole Women,” as the women trapped in the cult are referred to in the show).

The man being interviewed says in a very matter-of-fact way, “Unbreakable! They’re alive, damn it … because females are strong as hell!” The blatant recognition of the strength of women by a man proved to me that this show would not just be about the zany adventures of a quirky young woman.

With that quote at the beginning of every episode, I went into every episode with a reminder of how strong Kimmy is, even though she has only an eighth grade understanding of the world. If she could survive in a bunker for 15 years, she can survive anything. The series is filled with flashbacks to her life in the bunker, reminding the viewers that, although she tries to forget her past life, it still lingers over her.

In an attempt to completely escape her past life, Kimmy decides to move to New York City and attempts to conceal her identity as a “Mole Woman.” Equipped with only a bit of cash, her quirky personality, and her eigth grade level of education, Kimmy quickly finds herself in sticky situations and meets various characters who end up becoming some of her best friends.

Underneath the humorous layer of Kimmy having to come to terms with the slang, technology, and culture of the 21st century lies a truth in her search for her place in this new world. Not only is Kimmy in a century that she has never experienced before, but she is living in a city that could easily go on without her. Instead of letting this deter her from making her mark on her world and the people around her, she is motivated by her anonymity and her newfound ability to choose what she wants to do in this world. As a young adult, this underlying theme in Kimmy Schmidt is very important to me, as I think we could all use some reassurance that not quite knowing your place in this world is completely okay.

Kimmy Schmidt is filled with genius one-liners and risque jokes about current social issues in our country, but that is not what drew me to the show—almost every main character in Kimmy Schmidt deals with some sort of identity crisis, another theme with which college-aged students can very much identify.

Kimmy moves into a tiny basement apartment with Titus Andromedon (played by Tituss Burgess), a black gay man struggling with his dreams of becoming a Broadway star. Although he is afraid to embrace his gay identity, Titus faces the brutal hardship of being a gay black man in today’s world. In a notably hilarious episode, Titus discovers that he is more accepted on the streets dressed as a werewolf than when he is dressed as his normal self. Of course, this is a comedic dramatization on the writers’ part, but it depicts the struggle of acceptance that many gay black men face today. In the end, Tituss realizes that concealing who he truly is does not do him any good, and he decides to continue to pursue his dreams while dressing and presenting himself like he wants to—not how the world expects him to.

Kimmy also begins to work as a nanny for wealthy Manhattan wife Jacqueline Voorhees (played by Jane Krakowski), who turns out to be hiding her Native American ancestry from those around her to avoid the struggle of being a woman of color in America. Although I would have liked to see this character played by an actual Native American woman, the struggle of racial identity Mrs. Voorhees experiences was not only applicable to me as I watched the show, but could also resonate with millions of young women of color today. In a world where it is easier to be white, Mrs. Voorhees chooses to conceal her identity in order to live an “easier” life.

Perhaps the most impressive story of struggle and triumph, Kimmy’s journey to adulthood and independence proves that females truly are “strong as hell!” Kimmy moves to New York City by herself, helps Mrs. Voorhees to realize that she doesn’t need her rich husband to define who she is, and discovers that 15 years in a bunker doesn’t define her self worth. What, instead, defines Kimmy’s self worth, and all of our self worth for that matter, is that she tries every day of her life to better herself and learn that 15 years of being under the control of one man does not mean that she is dependent on others or is incapable of making her own decisions.

Kimmy Schmidt shows us that, no matter who you are or what situation you are in, you are resilient. You are the only person in this world who has the power to define your self-worth. Whether you’re a woman who was trapped in a bunker for 15 years or a college student struggling with finding your place in this world, you truly are unbreakable. 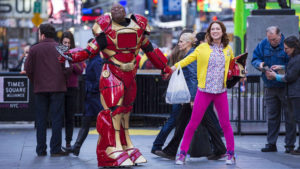