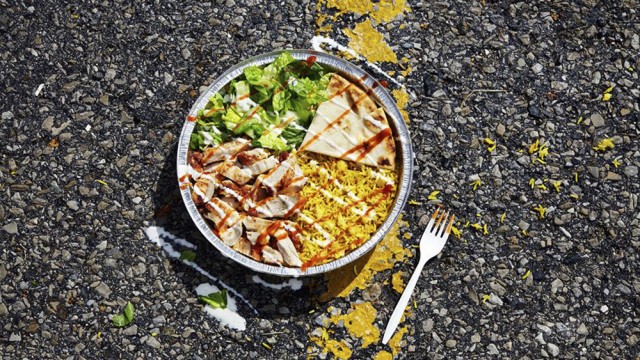 n spring afternoons, hand-made crafts and vintage finds are only half of the appeal of the South End Open Market @ SoWa. A Boston favorite for a decade, the part-farmers market, part-art show consistently brings thousands of locals to the South End, but it is the parking lot on Harrison Ave. that keeps them coming back.

Six out of the seven days of the week, 540 Harrison Ave. is far from unique. The cracked asphalt is interchangeable with any lot in the city, surrounded by a sea of brick and pavement and supporting the weight of tires and Massachusetts license plates. Sundays, however, redeem Harrison Ave. from normalcy. On that one day of the week, the empty lot transitions to a bustling maze of shoppers and eaters. Curious eyes scan chalkboard menus as lines weave in and out of one another. Forks pick at styrofoam containers filled with options from barbeque brisket to banh mi. The 24-foot long, rolling kitchens make 540 Harrison Ave. a global marketplace, and the Boston’s best summer lunch spot.

As the city finally makes its transition from the most brutal winter in history to a long awaited spring, tulips and daffodils dotting the sidewalks aren’t the only signs of warmer weather. Every April, a colorful fleet as vibrant as the blooming spring flowers descends upon the city. In addition to the return of the Red Sox and the fast-approaching Marathon, spring in Boston is food truck season and this year, over 50 local vendors are prepared to park their trucks from Copley Square to Chestnut Hill.

Before the trucks can open shop at the South End Open Market, they have to survive the city’s site lottery. Since Boston’s food truck initiative in 2011, the city government has not only begun regulating food truck operations but has also encouraged the growth of this mobile market with their yearly redistribution of vending locations.

Though the vendors can park at over 20 public sites, in addition to multiple private or special locations, the popularity of food trucks in Boston has led to an increased demand and decreased space in the most highly trafficked locations. The lottery system, which distributes the prime and non-prime locations evenly among registered food trucks, aims to manage the space and demand issues and provide fair business opportunities for every vendor.

“The interesting thing about the new spring schedules for us is that we get to sell at so many new locations,” Erica Normandeau, the marketing specialist of Bon Me, said. “It also means that some of our customers get sad when we aren’t in their locations anymore. Throughout the year, we grow a presence and gain customers, but have to change every spring.”

Though Bon Me’s followers may have to change their lunch schedules to keep up with their new locations, it is unlikely that this inconvenience will hinder sales of its infamous sandwiches and rice bowls. One of the most popular food truck operations in Boston, Bon Me began on top as it won the City of Boston’s Food Truck Contest in 2010. In just a few months, founders Alison Fong and Patrick Lynch would be selling “bold, fresh, and fun vietnamese cuisine” out of their newly-equipped mobile kitchen in City Hall Plaza.

Now a fleet of four multicolored trucks and two storefront locations, Bon Me is a prime example of the flourishing Boston food truck scene. This spring season, at the hands of the lottery, one Bon Me truck will even grace the parking lot adjacent to the reservoir in Cleveland Circle. The now-local favorite is enthusiastic about bringing its cuisine concept to Chestnut Hill and expanding the excitement over food trucks outside of the city.

Trucks like Bon Me and Roxy’s Grilled Cheese, which was able to open its first brick-and-mortar location in Allston in December, have seen years of success in the Boston food truck scene. But each spring season brings new trucks to the parking lot.

Rami’s Food Truck will hit the streets for the first time this month, and will offer traditional Middle Eastern cuisine as Boston’s second kosher food truck. Unlike the traditional truck to storefront transition that many of Boston’s mobile kitchens eventually evolve into, Rami’s is taking the opposite approach—the vehicle is the newest addition to the local restaurant chain.

“We loved Israel, loved the food, and loved Rami’s,” said Chef and Owner of Rami’s Food Truck Ari Kendall, who will run the truck with Co-Owner and friend Matt Pultman. Kendall and Pultman, Massachusetts natives, started the truck on a whim. After a year living in Israel, they were both accustommed to Middle Eastern cuisine, which led them to Rami’s after Kendall decided to leave his restaurant job.

“I wanted to have a little more control and creative input in what I was doing, so I quit my job, applied for a food truck permit, and a few weeks later we were starting to build,” Kendall said.

With a coveted parking spot at City Hall Plaza, Kendall and Pultman were enthusiastic about their first day.

“The food truck is obviously a beautiful creation in and of itself,” Kendall said. “People are just happy that they have access to more awesome, authentic, healthy, and great food.”