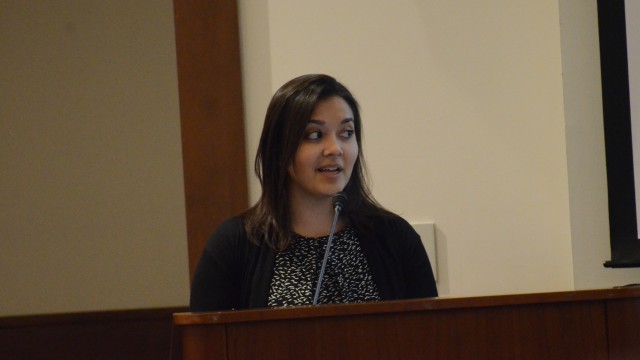 Fiore-Chettiar Recognized As A Strong Voice In The AHANA Community

Nanci Fiore-Chettiar, president of the Undergraduate Government of Boston College (UGBC) and A&S ’15, was awarded the Dr. Donald Brown Award for 2015. Established in honor of Donald Brown, the director of the Office of AHANA Student programs from 1978 to 2005, the award is presented to a senior who has significantly contributed to to the campus throughout their four years, especially within the AHANA community. Fiore-Chettiar was recognized in a ceremony on Monday night.

The daughter of a white mother and South Asian father, Fiore-Chettiar did not originally think that much about being in AHANA. She grew up with her mom in a predominantly white town, and when she came to BC, she did not think the AHANA label applied to her. When she joined FACES as a freshman, however, she began to learn about racial inequality and her own racial identity.

Fiore-Chettiar, who will graduate this spring with a degree in sociology, has been a voice within the AHANA community since her freshman year. She created the viral “We Are BC” video her freshman year in an attempt to build unity and acceptance on campus. As a sophomore, she founded Backgrounds and created safe spaces for students to have dialogues on race and diversity in small groups. She co-wrote the FACES videos during her junior and senior years to respond to racial slurs posted on Yik Yak and the grand jury’s decision to not indict those involved with the deaths of Michael Brown and Eric Garner.

While most BC students are not, in Fiore-Chettiar’s opinion, consciously discriminatory toward other students, she says she sees discrimination on a daily basis in the form of microaggressions. These comments are from students who haven’t had many discussions on race and who make comments that are unintentionally hurtful, she said, but even students who do participate in these conversations can still be guilty of harmful comments.

“I have said a lot of those comments in the past and sometimes still do, because there’s no way to know everything or know how something will be interpreted by someone else,” she said.

Fiore-Chettiar is currently working at an internship with the Federal Court at a re-entry program for non-violent offenders who had been arrested at a very early age. For example. she might work with a client who was arrested at the age of 6 for stealing something at a convenience store and is struggling to readjust back into society. She commented on the disparity between the treatment of minorities and whites who are caught stealing. While a minority might be arrested even at the age of 6, white children who are much older and are caught stealing might be punished by having to return the stolen items and apologize to the clerk, she said.

Her current internship sparked her interest in social work outside of the BC and AHANA community, she said, and she plans to pursue a Masters degree at the Boston College School of Social work.

“Just by being incarcerated at such a young age … can have a lot of negative effects on their psyche, in terms of in the way that they view themselves in society, and also feeds into this idea that that’s all anyone thinks of them in the first place,” she said.

nanci fiore-chettiar
Matt And Kim Swing And Drum Their Way To A ‘New Glow’
‘A Gentleman’s Guide’ To Love, Fame, Success On Broadway