Raise your hand if you would go into an Ebola-stricken area during the height of the crisis, Lara Logan instructed the audience in the Heights Room Tuesday. After a long pause, a few audience members raised their hands.

Logan, a CBS News chief foreign correspondent and 60 Minutes correspondent, did choose to go to Liberia during the Ebola crisis to report on health care workers for a 60 Minutes segment. She spoke about her experiences there, as well as reporting in other parts of the world, as part of the Chambers Lecture Series run by the Winston Center for Leadership and Ethics.

Logan has worked for CBS since 2002, reporting from war zones, such as Iran and Afghanistan during the search for al Qaeda and Osama bin Laden. She has also conducted interviews with notable figures like animal rights activist Jane Goodall and actor Mark Wahlberg.

Born in Durban, South Africa, Logan graduated from the University of Natal in 1992 before studying in Paris at the Universite de L’Alliance Francaise. As a student, she spent her time working with her college newspaper. She speaks Afrikaans, as well as French and Portuguese.

“When I come and talk to people, I don’t like to have anything written out,” she said. “I’ve been known to do a four or five-hour interview for 60 Minutes without looking at a piece of paper, because I feel like I want—I need—to know my subject well, and I always think it’s rude, when you’re talking to someone and they’re talking to you, to be reading a piece of paper to see what your next thing is going to be.”

She started her career in journalism in 1988 as a news reporter for the Sunday Tribune and later for the Daily News, both newspapers located in her hometown of Durban. She then transitioned into broadcast journalism as a senior producer for Reuters Television in Africa.

When students ask her how to get a job in journalism and do the kind of work she does, Logan always responds by asking them why they want to be journalists.

For Logan, working on television was only natural for her, because there were more jobs available for people like her—“a white South African under apartheid”—in broadcast journalism than in print journalism.

While Logan was still working in South Africa, apartheid was not yet abolished. She and her journalist colleagues took part in the struggle to end it by reporting on what was happening at rallies and protests.

“That was the best job I have ever done in my life,” she said. “I’ve never loved anything as much as that, because the world was very simple in those days—and, of course, it wasn’t. White South Africans like me, we didn’t have a voice in the international media. We were all ‘bad,’ but I didn’t care about that, because we were fighting for something that was bigger than all of us.”

The lessons she learned while fighting against apartheid helped her to see that racism is present not only among whites and blacks, but also among Serbians and Albanians, Australians and aborigines, as well as Americans and Native Americans, while traveling to other countries.

In 2011, Logan went to Egypt for a 60 Minutes report on the protests that had been occurring for two weeks to overthrow the regime under Hosni Mubarak. On Feb. 11 in Tahrir Square, people were celebrating the successful end of the revolution, when a mob of men sexually assaulted her, tearing at her clothes and attacking her. Some 200 to 300 men were involved, and Logan was eventually separated from her security guard.

“Everybody wanted a piece of the girl,” she said. “It’s amazing how fast your mind was working and how slow everything is at the same time. And I remember—I’ll never forget the feeling—of the air, the night air, in Egypt, on my skin, because that was—it was just so devastating to be naked in this public place, in this terrible way.”

Logan became fearful of death when she realized that she was in the process of dying from not taking in enough oxygen and that she would never see her children again, she said. Finally, after about 25 minutes, she was rescued by a group of Egyptian women and soldiers, who had to reach her through the crowd.

Although Logan is aware of the dangerous situations she is often in, she continues to accept stories wherever her work takes her.

“You have to be able to listen and put yourself in other people’s shoes all the time, and it makes the job difficult, because the more information you have, the harder it is—the process of putting television together—becomes more and more difficult as you go,” she said. “But I’ve always believed that having that fundamental understanding helps you make better decisions when you put your story together.”

journalism lara logan 60 Minutes
BC Shows A Good Return On Investment With Room To Grow
Gregory Angelo, BC ’00, Shares The Conservative Argument In Support Of Gay Rights 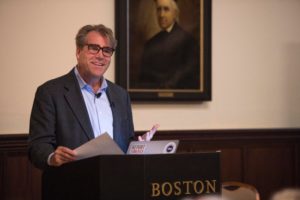