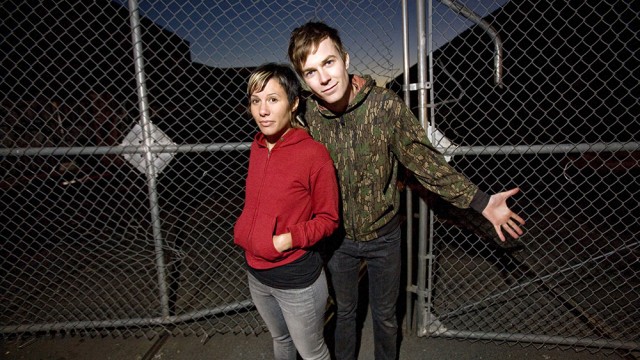 The 10-song tracklist is a catchy collection, its prevalent percussion provided by Kim Schifino and quirky lyrics sung mostly by Matt Johnson. The record is reminiscent of their past four albums. The new release, however, is far more synthetic than the simple, organic sound in previous LPs. Not afraid to hold back on lo-fi features and auto-tune, the songs just narrowly escape sounding overproduced. Because the album is almost entirely made of remix-ready dance songs, the busy tracks excite rather than irritate.

The album opens with hit love song “Hey Now,” an upbeat track thats jaunty instrumentals and bleating horns set apart from the drum-heavy songs that follow. In true Matt and Kim fashion, the lyrics are a loud romantic confessional. With lyrics like “Sometimes you just make me lose my mind / But if you died I’d die right by your side,” the song is a love letter-turned musical track from Matt to his real-life wife Kim. With its brass background and fun feel, the song is a successful high-school-marching-band-meets-indie-alternative experiment.

New Glow is a rather significant change from the group’s self-titled debut album in 2004. Initially softer and much more stereotypically indie-folk, Matt and Kim emerged on the music scene as fresh faces with a unique sound and an affinity for the keyboard and drums. The albums that followed—Grand, Sidewalks, and Lightning—retained the same general sound and strayed very little in terms of style from one album to the next. Since the release of Matt and Kim’s last album Lightning in 2012, the couple used the lengthy three-year hiatus to become a group who has become exceedingly more adventurous and inventive.

Throwing high-pitched flutes and elegant violins into drum-dominated song like “Can You Blame Me” and “Killin Me” is a bold move by the pair. It works simply because each song is an odd mix of musical instruments and electronic elements that somehow, when thrown together into one track, makes listeners wonder why indie artists haven’t experimented with similar combinations before. Venturing into unfamiliar territory with a marimba sound in “Get It,” Matt and Kim prevail yet again in their attempt to defy the expectations for indie songs by mashing their genre with completely unexpected background instrumentals.

Another popular song from the album is “Hoodie On”—an electric-infused piece featuring a mechanical rhythm and rolling bass that combine with bizarre lyrics that can only be collectively described as an ode to the hoodie sweatshirt. The autotuned refrain “lookin like a king with a hoodie on” rivals Matt’s shouts of “a suit and tie always felt wrong … been round the world ten times with a hoodie on” for strangest line in the song. Intended to be a comical oddity thrown on the album for fun, itunes sales of the song since New Glow’s release identify “Hoodie On” as a clear favorite among fans.

New Glow, though, misses the mark on several occasions throughout the 10-song album. Lyrics lack substance and most of the tracks are extremely redundant. Though it succeeds in its frequent comedy, “Hoodie On” sounds at times like a Weird Al Yankovic parody gone wrong. Matt’s discordant yelling song after song quickly grows irritating. Some of the instrumentals sound identical to a number of annoying pop ballads that reuse the same stock synths and background music. Though the disappointing aspects of the album occur sporadically throughout New Glow, there are a few songs that the duo could have done without.

“I See Ya” is a disappointing end to the album. Its hymn-like sound and slow cadence is unlike any of the other upbeat songs on the album, and its robotic attempts at harmonies and and attempt an interlude just draw out an ending that should have happened three tracks ago. Decidedly out of place in a predominantly dance album, “I See Ya” joins an overly repetitive “Stirred Up”  in the running for most unnecessary song on the tracklist

Despite the much needed style evolution and risky sound experimentation, Matt’s monotone and moaning vocals as well as his quirky keyboarding skills remain unchanged after an entire decade. Such familiar aspects remind fans that Matt and Kim are the same indie couple they met in 2004 whose cute lyrics and catchy songs captivate listeners of all music preferences.

Aptly named, New Glow revitalizes a band whose quirky boy-girl indie image has become commonplace in the genre. Matt and Kim’s new, unexpected sound gives new life and attention to a band who may have otherwise been considered old news.

album review matt and kim new glow
Gregory Angelo, BC ’00, Shares The Conservative Argument In Support Of Gay Rights
Fiore-Chettiar Recognized As A Strong Voice In The AHANA Community