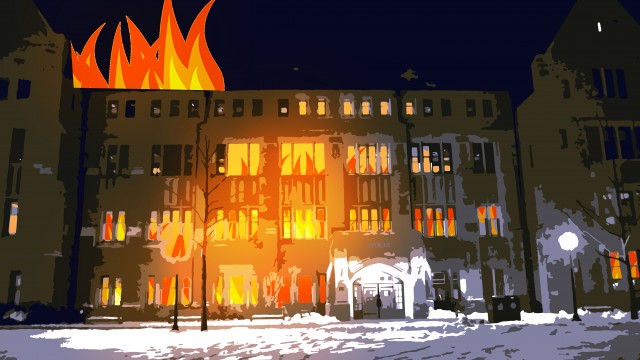 [Note: This is the third part in a three-part satirical series. All characters and situations are fictional and products of the author’s imagination.]

The truth of the administration’s big plans were clear to Joey now, leaving him drunker and more paranoid than ever. With the Big Crackdown leaving hundreds of students in legal and residential limbo, fortress-dorms were being constructed in record time to settle the displacement caused by No More Than Four to “Get Students Housed.” Off-campus residences, control of which had been ceded to the school by city mandate and reluctant landlord compensation, were being redesigned like dorm rooms. The towers on the Heights reached halfway to Allston, besetting the neighborhood complementary bugged WiFi, an off-campus Boston College Dining marketing blitz, and Registered Off-Campus Security Liaisons.

Emails from the Student Investigative Liaison office were chiming in every  day asking Joey for more “leads” on the whereabouts of the arsonist or contact information for any of his “potential associates.” The emails were growing more exasperated at Joey’s stalling for time, and Joey wondered whether the emails didn’t suspect him of conspiring against them.

There had been a demonstration earlier that day. Joey had watched from a bench. The cleaners had rounded up enough people and facilitated enough graffiti to feel comfortable pressing the issue. But it seemed to Joey the cleaners had struck while the iron was cold—the administration was stronger than ever and hadn’t blatantly attacked the students as of late. He saw Nimitz and other large, authoritative men from either the city,  the school, or somewhere else exchanging some tense words with some of the protestors. Evidently they would face disciplinary action—natch—but it would be more severe if it could be feasibly ascertained (their words) that the protestors had been involved in some graffiti action at the Foster Street Dining Pod. The protest submitted. It never had much legs anyway.

Mostly the sheer bewilderment of the Big Crackdown was enough to deter your average BC student from any supposed political calling. There was enough extracurricular stress to go around. The buzz around campus was that the protests were all hot air and of little concrete issues, and that concerns about student rights were old hat before the protests. More eyes were directed at BC’s latest viral likeability ploy, a Jesuit-starring choreograph set to the recent hit “Take Me To Church.” Joey passed by the set of this production on his way home from the protest.

The video was a digestible level of institutional incompetence that any BC student could confidently lambaste. All but the least tasteful BC administrators could see it for the tonally-misguided, humorless skin-crawler that it would be in BC’s hands, though Joey wondered for a moment whether that wasn’t BC’s plan all along. From its inception, the “Take Me To Church” video was doomed to be passed around in the Yik Yak snark party a dozen times before being put meekly to bed by a New England Classic hot take. So go the real BC issues, Joey thought as he walked by the dancing priests.

Of all the police and infraction hunters that had come knocking on Joey’s door, the most surprising was an inebriated Brent, who rolled into Joey’s apartment unannounced one evening. It would seem that the pressures of the job had rolled Brent down a similarly liquory path. The Big Crackdown got everybody housed, Joey thought.

“Nimitz man, him and these city goons went hardo on this Big Crackdown,” Brent went in. “It’d be crazy to say he loves it. I can’t tell, he might just actively hate young people. But he scares me, man.”

“You know this was their plan all along, Brent,” Joey replied. “All the way back to the arson.”

“Oh give that case a rest Joey!”

“Did you frame him?”

“The arsonist. Did you frame him?”

“And you knew that.”

“Sure! Everything you kids do online is linked together.” Brent contorted a web with his fingers to stress his point. “Ya know, ya know, the more information we get, the more uh, they, can plan to keep you safe and running properly.” Brent helped himself to some of Joey’s gin and sloshed his way through these next few words. “They’re tying the whole thing together so they can … uh … keep you in house.”

Joey felt lost. “We were never going to find the arsonist, were we?”

“Man, you’re still stuck on that? Of course not, we went to all those apartments to find dirt on the cleaners, and make sure you weren’t snooping in the wrong places. Nimitz loved it—it was great fun. But things are different now. I picked a bad time to be a BC cop. This Big Crackdown stuff gives me the Hebrew Jebrews.” Brent stood up. “Thank you for the gin. Now I’m gonna go sort my life out.”

At the door, Joey called out to Brent. “You know Brent, sometimes I think you and I are two sides of the same coin.”

Brent winced as he left. “What in the heck is that supposed to mean?”

Over the last week of school, Joey had all the gin and all the cigarettes in the world. He suspected Nimitz was following him. Not much was remembered about those last few days. It was mostly dead quiet, punctuated by bursts of new evidence that they were on to him and they were following him. Just enough rope. He heard a Nimitz knock on his door. Not Nimitz. Somebody bigger, quieter. 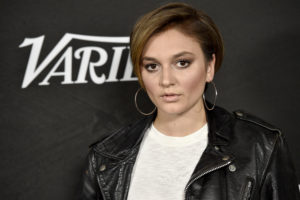 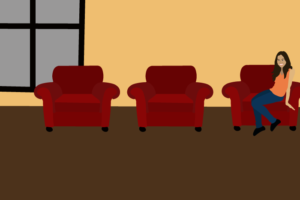 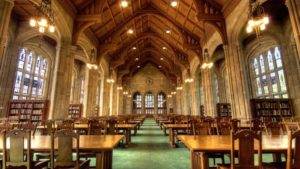