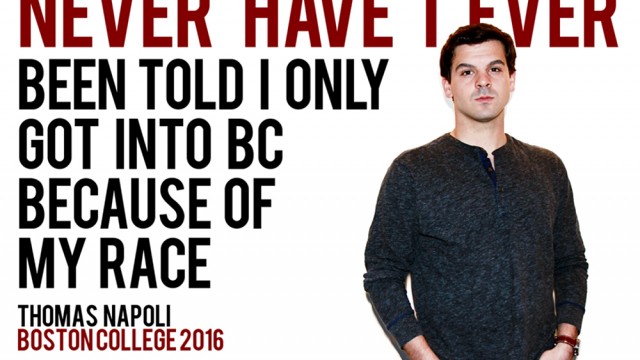 “Never have I ever been told I only got into BC because of my race,” reads the text overlaid on a picture of Thomas Napoli, the 2015-16 president of the Undergraduate Government of Boston College (UGBC) and A&S ’16.

Sunday night, the communications department of UGBC launched a photo campaign to highlight privilege awareness and how privilege intersects with identity. The photos, which feature a portrait of BC students with a caption detailing something they have not had to experience, fall into several categories: gender identity and expression, race, religion, socioeconomic status, and ablebodiedness.

The main target audience of the photo campaign are people of strong privilege and others who are drastically underprivileged, said Joon Park, director of communication for the GLBTQ Leadership Council (GLC) and A&S ’18. It is open to everyone, but it is starting with members of UGBC, orientation leaders, and member of the FACES Council, an anti-racism coalition.

Park, who is leading the photo campaign, previously held a similar photo campaign that featured members of the University wearing T-shirts emblazoned with Support Love and a graphic of cartoon couples. This campaign, Park said, is slightly different. The “Support Love” campaign was meant to be candid, whereas this photo campaign is meant to be more thoughtful so that people will think about the privilege they possess.

“I just really want people that normally would not be having these conversations to talk about it,” Park said. “I just want people to be thinking about this at the end of the day.”

The photos will be posted on Facebook, on a webpage maintained by UGBC, and will be printed and posted around campus.

Ideally, the physical presence of the fliers will force students to engage with issues of privilege, said Nanci Fiore-Chettiar, UGBC president and A&S ’15.

In addition, they hope to host a speaker sometime next semester in conjunction with the photo campaign to continue efforts to raise awareness of privilege at BC.

“We don’t want this convo or photo campaign to end at the end of this year,” she said. “It is something that will continue next year.”

Park found that UGBC events and initiatives often “preach to the choir”—the people who attend are the same as those people that are already interested.

With this project, members of UGBC hope to disrupt this trend by targeting different groups. Athletes, for example, are one group in particular that they hope to engage with the campaign. Right now, there are about seven athletes participating in the campaign. Athletes are such a focal point on campus that it is necessary for them to also be engaged in this conversation, said James Adeleye, a member of Student Initiatives and A&S ’16.

“We want every person who does partake in it to think about their privilege,” he said.

The campaign was inspired by a similar campaign at Duke University called “You Don’t Say,” which paired photos of students with captions about why they choose not say certain words or phrases, like “man up” or “gay.” UGBC initially wanted to do this same campaign, but found that Duke had copyrighted it, so they decided to start the “never have I ever campaign.”

“I think really one of the big reasons we wanted to do this was to acknowledge that there are several different types of privilege, and they’re all important and all fundamental aspects of our identities,” Fiore-Chettiar said. “In a lot of ways types of privileges are pitted against each other. So this was to show it’s not about pitting them against each other but recognizing that they exist.”