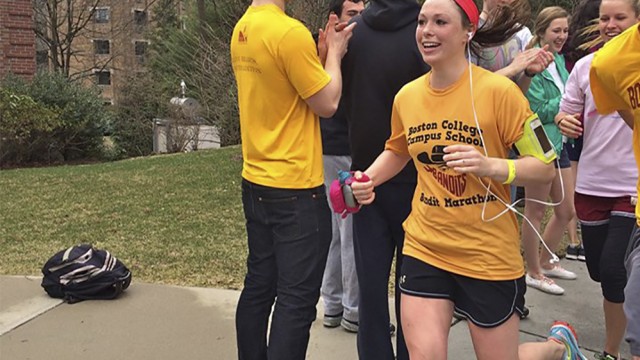 A brownstone home in Boston’s Back Bay neighborhood caught fire in March 2014—an event driven by sparks from nearby welders and abnormally brisk winds. Quickly becoming one of the most dangerous fires in the city’s recent history, the event left 18 people injured and two firefighters dead—constituting the first time a Boston firefighter has died on duty since 2009.

Having run the “Bandit Marathon” with BC’s Campus School volunteers last year, Logan admits that she had her eyes set on crossing the finish line at the main event since her freshman year.

“My freshman year I proudly watched a few of my friends run the Boston Marathon with the Campus School and made a promise to myself I would do it the next year,” Logan said. “I was planning on running as a bandit with the Campus School, but the BAA respectfully asked us to please not run unregistered due to the events of the previous year. Although we were all bummed and discouraged, we decided to not give up and to run our very own Bandit Marathon the week before the official race.”

While Logan felt accomplished that she completed a marathon after never having run more than six miles before training for it, crossing the finish line in 2014 failed to give her a sense of finality. Her end goal was the actual Boston Marathon.

“I strongly believe the Boston Marathon has become much more than just completing an athletic endeavor,” Logan continued. “The marathon has united people who never had previously run more than a 5K, but feel compelled to raise money and run for those who cannot.”

Particularly challenging to Logan was the time constraint she faced for fundraising when returning from her study abroad program in Quito, Ecuador. Most runners are suggested to begin raising money for their charity six months before the marathon. In only one third of that time upon returning to BC for the spring semester, Logan not only needed to raise money, but first find a charity to raise it for.

“After a few failed attempts to get a bib from charities aligned with John Hancock, I applied to run for the Last Call Foundation,” Logan said. “I first reached out to close family and friends, and then decided I wanted to do something on my own to raise money so with the help of my friends, I started a March Madness squares competition. I raised about $300 doing that, and the rest came from personal donations.”

As she nears completion of her fundraising goals, Logan is turning her attention to communicating the background story behind her donation campaign. She believes increased public knowledge of these charities’ missions will increase both the likelihood of people donating and overall awareness of the causes.

“I am so humbled by the generosity of family and friends as well as the anonymous gifts I have received from perfect strangers,” she said. “There are so many amazing causes out there, so it’s hard to constantly ask people for donations. But if you explain what it means to you and why you feel compelled to fundraise, then people are more than willing to generously support you.”

Set for April 20, the Marathon inches closer as Logan completes the final portions of her training alongside her fundraising efforts. Logan never would have referred to herself as a runner before completing the 2014 marathon, but she now finds a certain peace in the activity.

“Running is a time where my mind goes completely blank and I am able to put one foot in front of another and just go,” she continued.

While Boston’s record-breaking winter in terms of snow accumulation has undoubtedly made outdoor training difficult at times for Logan and the friends she has made doing group runs, she has stayed healthy throughout the preparation and found that the conditions should leave her well prepared for next week’s event.

“The record-breaking winter has definitely not made this an easy year to train, but the group I do long runs with has turned it into a lot of fun,” she said. “You realize just how much you can push yourself running in these conditions, which will hopefully make next week a little easier.”

Logan is increasingly excited as she nears a milestone that has been on her mind since her freshman year. Planning to run with her father, she remarks that no matter what happens that day, her preparation and desire to run will leave her ready to cross the finish line.

“I think if we woke up on April 20 and saw snow, a lot of us would laugh it off and say that it hasn’t been anything we haven’t done before,” said Logan. “It’s going to be an amazing day regardless and I can’t wait to run by BC and to finish something I started last year.”