Home » Tickets Heavily Limited To Donors For BC Vs. Notre Dame Game At Fenway 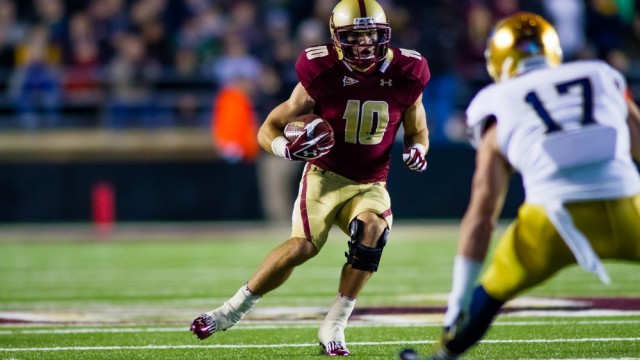 Tickets Heavily Limited To Donors For BC Vs. Notre Dame Game At Fenway

Many fans looking to watch the Boston College Eagles compete in a historic football game at the Boston Red Sox’s Fenway Park against their longtime rivals, the University of Notre Dame, may have to settle for their couches instead.

On Friday, BC Athletics announced its ticket allocation system for the BC-Notre Dame game on Nov. 21. Despite being held in Boston, this game will be the sixth installment of Notre Dame’s Shamrock Series, in which the Fighting Irish play a home game at a “neutral” site. In previous years, Notre Dame played at Yankee Stadium and Soldier Field. The Irish have never lost a game in the series.

As the away team, BC will only be allotted 5,000 tickets for the game, the standard amount of tickets given to road teams in the ACC. Tickets will first be divvied up among the families of players and staff. After that, BC Athletics will provide a certain amount of tickets for students. That plan, however, has yet to be finalized, Jamie DiLoreto, associate athletics director for External Relations, said. Details will be shared in the next few weeks along with impending changes to the Gold Pass for the 2015-16 athletic season.

Once those allotments are settled, Steve Novak, associate athletics director of athletic development, estimates that around 3,600 to 3,800 tickets should be available for purchase by the public. The “public,” however, is limited strictly to season ticket holders and those who donate within predetermined brackets by BC Athletics.

Tickets will be allocated in descending order of monetary donation. Those who request tickets must donate a minimum of $5,000 within this fiscal year. People giving between $5,000 and $9,999 will be eligible for two tickets, $10,000 to $24,999 for three, and over $25,000 for four. Donors who have not given the minimum $5,000 in the 2015 fiscal year but have given a lifetime amount of over $100,000 will also be eligible to apply for tickets. Additionally, all season ticket holders who have purchased tickets by May 31 will receive one entry into a lottery for the opportunity to purchase up to two tickets for the game. Those who commit to donating over $100,000 within the fiscal year or who have donated $100,000 between 2011 and 2014 will also receive a bonus amount of tickets.

BC has enacted this system in the past, as recently as the Pinstripe Bowl, for events the athletics department believes will be highly attended—however, the motion is rarely needed. Athletics made the announcement early to give fans the opportunity to reach the $5,000 plateau by May 31, the end of BC’s fiscal year. This date is also the deadline for requesting tickets.

Novak anticipates the cost of each ticket will be $400 per ticket. This will include a gift component for each ticket. In addition, a public sale of the tickets is unlikely, considering the expected interest in this game and that Notre Dame holds the right to the rest of the ticket sales at Fenway Park. Notre Dame has yet to release an exact number of how much tickets will cost for its share and the school has yet to release information on how tickets will be distributed.

Given the lack of tickets, the University is working with its partners to provide an alternative for fans who are ineligible to attend the game. One proposal is a watch event hosted at the House of Blues on Landsdowne Street, hosted by the Office of Student Affairs and the Alumni Association. Details on these events are impending.

“We do understand that this is a game of great interest, this is a great event in the City of Boston regardless of who the home team might be,” Novak said. “We want all the Boston College fans who are interested to have the opportunity to enjoy it with other BC fans.”