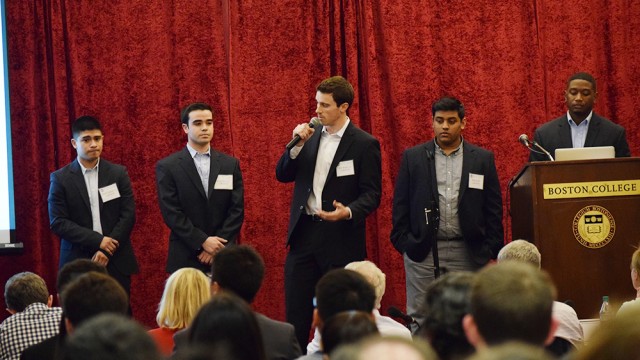 CoReHub, an online marketplace that connects buyers and sellers of real estate, won the Boston College Venture Competition (BCVC) final competition this Monday, earning $20,000. Helpers, an on-demand tutoring service, won second place and $10,000, and 1950 Collective, a clothing company, won third place and $2,500. Winners were selected for the strength of their business plans, product, and market for their product. This year’s competition featured a record 37 entrants.

The BCVC finals took place this past Monday in the Fulton Honors Library. The competition featured five BC student teams that moved on from the Semi-Finals two weeks earlier. Helpers, 1950 Collective, Noggin, Postcard, and CoReHub all presented in front of a panel of judges including CEOs, venture capitalists, and professors.

The BCVC program is a University business plan competition designed to promote the growth of entrepreneurship at BC. The program also provides mentorship from students, faculty, and alumni to assist students in creating their businesses. The organization offers sessions with entrepreneurs, executives, lawyers, and venture capitalists for students to learn more about the business landscape. This time around, students had more time to present their business, as opposed to the two-minute elevator pitch at the semi-finals. Following the presentations, while the judges deliberated, students from various clubs on campus that also aim to foster technology and entrepreneurship presented, including BC Grad Tech Club, Computer Science Society, Information Systems Academy, and BC Women Innovators Network. Next, alumni Miguel Galvez, BC ’12, of NBD Nano and Tom Coburn, BC ’13, of Jebbit presented Soaring Startup Circle, which provides students with time, office space, resources, and mentorship to BC student companies.

Representing the 1950 Collective, Angela Jin, CSOM ’17, and Nashiki Maredia, University of Texas ’18, showed off their One Direction fan clothing brand, which was created after they both found that there was a poor selection of merchandise on the band’s web store. 1950 Collective sells t-shirts and phone cases featuring images of the band. In addition, the clothing line also donates 10 percent of its profits each month to a different female empowerment organization.

Helpers also sees an opportunity to sell its API and connection systems to schools that can benefit from organizing their data. The group hopes to launch its application in September with a focus in the Boston area.

Postcard—John Doherty, A&S ’17, Theodore Chapman, CSOM ’17, and Jack Uesugi, CSOM ’17—aims to be the first ever merit-based platform for Instagram where users can share their photos that they previously “Instagrammed” with 10 users on Postcard. If the users they share it with “like” it, then it is passed onto three more users. This allows the best content and the best content creators to gain the most exposure by making the content go viral.

Following the pitches, judges Greg Strakosch, BC ’84, of TechTarget, Kristin Keating, BC ’94, of EY, Bob Davis of Highland Capital Partners, John Morrissey of Shea Ventures, and Bridget Akinc of CSOM faculty deliberated to select the three winners.
After deliberations, BCVC honored its board members for their work throughout the academic year. The judges then thanked the participants and left with parting words of encouragement and praise.

“We were particularly impressed as we looked down the list of the range of grade levels represented—which I think bodes well for the future of this program,” Aknic said. “I really want to commend all of you for the leadership that you have demonstrated in participating in this event.”

Judges also acknowledged the advancement and growth of the program over the years. Faculty advisor John Gallaugher, BC ’88, MBA ’90, praised those who are responsible for growing entrepreneurship at BC.

“The students are just outstanding, the alumni couldn’t be greater, and our dean Andy Boynton has so much energy around galvanizing entrepreneurship and innovation at BC,” Gallaugher said.