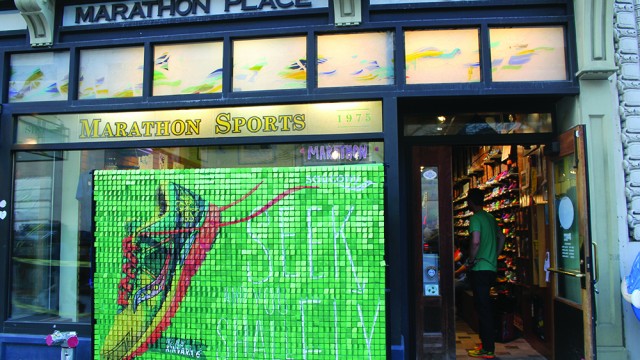 Foot By Foot, Marathon Sports Provides Sole Of The Race

Situated on Boylston St. across from the Boston Public Library and right off Copley Square is Marathon Sports, a well-known running store and gathering place for runners from the Boston area and beyond, especially leading up to the Boston Marathon.

The company, founded by Howard Sagrans in 1975, opened its first store in Harvard Square but has expanded to seven retail locations in the Greater Boston area.

The Boylston store, opened in 2001, is perhaps the company’s best-known and most frequented, due to its central location right on the finish line of the famous Boston Marathon. It is one of four Marathon Sports stores located along the Boston Marathon course.

“Our store is a gathering place for the Boston community, a place for people to learn about the marathon and get involved in a more active lifestyle,” Assistant Manager Morgan Kennedy said.

Kennedy, currently a junior at Emerson College, has worked at the Boylston location since fall of 2014. Her duties as one of the managers include leading the staff and maintaining a positive atmosphere in the store.

“We fit people for shoes, and try to find the pair that is perfect for them,” she said.

In early 1992, the store integrated a foot and biomechanical analysis into the shoe selection process, which they call “The Right Fit.” This method, still used at the store today, helped pioneer the gait assessment component now utilized by many running stores throughout the country.

A lot of events happen around the time of the Boston Marathon, as various athletic brands seek to host promotional events and launches at the store. On Monday night, the store held an event for the launch of a Saucony Boston-themed running shoe.

The store also hosts a running club every Wednesday night at 6:30 p.m., which is free to join and practices year-round.

The club meets at the store location and then runs along the Charles River, and is comprised of runners of all different ages and abilities. The club has been known to garner over 100 runners per meeting during the summer months, but a smaller number also brave it through the winter.

“I’d say we get about six to seven new runners each week,” Nick Panarello, a sales associate at Marathon Sports said. “Sometimes, tourists join too since they want to run with people who know the area. We get runners from all over, and it’s a great way to meet people.”

Kennedy is another staff member who will be running the Boston Marathon this year to promote a charity organization, raising money for a non-profit called Back on My Feet, which promotes independence and wellness among the homeless.

“The marathon has always been really special to me,” Kennedy said, who grew up in the Boston area, and was never a runner before college. “Growing up, I’d always watched my dad run it, and last year for the first time I ran it with him.”

On Wednesday, running groups from various Marathon Sports locations will go to the marathon finish line to commemorate those who lost so much in the bombings. Marathon Sports is working to raise money for one of the survivor’s charities of the One Fund, Panarello said

Following the 119th Boston Marathon, set for Monday, the store will continue to work to build a strong and devoted community of runners, who continue to celebrate the sport.

Both Kennedy and Panarello agree that the employees represent the spirit of the company’s ideal, and are dedicated to helping people pursue their goals for a healthier life.

“Running may seem like something to do just for fitness, but it’s really about community,” Kennedy said. “That is why I love working here—to help bring people into that community.”