Home » From Sneakers To Cans, Brendon Anderson Redefines His Marathon Run Through Recycling 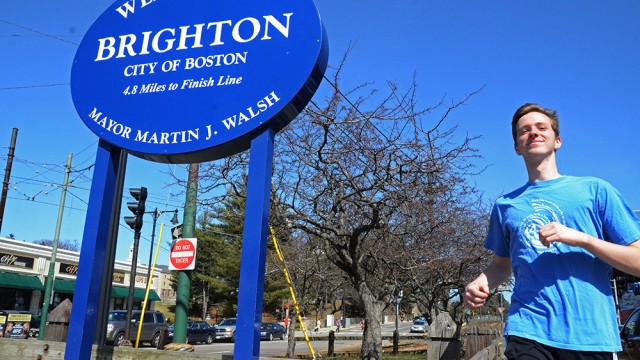 From Sneakers To Cans, Brendon Anderson Redefines His Marathon Run Through Recycling

n-campus closet space is usually an after thought. At times a point of contention between the lucky tenants of the elusive forced triple, most concerns about campus closets diminish at the hands of the Container Store and under-the-bed storage. Once graduated from the cramped cubicles of freshman year, closet space seems to only increase in upperclassman dorms. As the spring approaches, the auxiliary storage spaces of Vanderslice, Voute, and Rubenstein are usually lightly packed with now-obsolete winter coats and Bean Boots, remnants of the brutal Boston February. One closet in Ignacio, however, is cleared of empty suitcases and extra toilet paper, but filled to the top with cans.

“It all began with sifting through the trash cans in Iggy, and now just yesterday there was about five feet of bags of bottles and cans stacked in my closet,” said Brendon Anderson, A&S ’15, who has been collecting cans for the majority of his senior year. Though he admits that his room has been cleaner in the past, he shouldn’t have to deal with the smell much longer as his bottle and can collection is in preparation for the Boston Marathon.

Over the past few months, Anderson has been making almost weekly drives to the Allston Redemption Center where he receives a five cent stipend for each recyclable bottle or can he has collected. After countless trips, Anderson managed to establish a friendship with the owners (despite how many times he has clumsily knocked over their organized stacks of recyclables), and he has now raised over $1,500 that will allow him to run with an official number in this year’s Marathon.

Though housed in his closet, Anderson has not been collecting alone. Friends and family are just a few of the others who have had a hand in helping to bolster his collection. Anderson’s bags of bottles originate everywhere from the bushes of the Mods to the Vanderslice recycling rooms. 4Boston groups have spent some of their weekly reflections collecting cans for his cause, and it is not uncommon for him to get an exciting call from a friend who hosted a party the evening before.

“It allows people to get involved,” he said. “Especially for college students, of course everyone wants to make a donation but sometimes thats hard. This helps people realize the little, everyday things people can do to help out.”

Anderson spends a lot of his time finding ways to help others out from his collection, even the idea for his unique method arose from donating the money from his recyclables at home to nearby charities. As one of the 4Boston councilpersons for the Roxbury nonprofit ACEDONE, African Community Economic Development of New England, Anderson spends four hours a week working with and tutoring local, East African youth.

His time at 4Boston and ACEDONE have allowed Anderson to establish lasting relationships with others outside of the Boston College community and also helped him realize his draw to service is also manifested in his fast-approaching, 26.2 miles.

his year Anderson is running the Marathon as a member of Team Respite in conjunction with The Michael Carter Lisnow Respite Center. Located just a mile from the starting line in Hopkinton, The Respite Center is one of the Boston Athletic Association’s five, sponsored, legacy charities.The BAA allocates official numbers to various charities, in addition to those who qualify for the Boston Marathon, as a philanthropic endeavor as well as in recognition of the Boston community.

100 percent of the money that Anderson’s cans have amounted to—as well as an additional $1,500 in donations he has received—will benefit the Respite Center in providing services to adults and children in need of care. Similar to ACEDON, The Michael Carter Lisnow Respite Center benefits local families in a variety of ways. Though from the outside it may seem like a quaint house in Hopkinton, the Center provides programs that range from after school care to employment support for those with disabilities and special needs.

“I think the two really hand in hand for me,” Anderson said. “I realize that all this service work that goes on at BC—that we are so fortunate to be a part of—really relies on so many other facets that we don’t even know. Running with The Center has allowed everything to come into place, and it’s something I wouldn’t realize by only working in a classroom for a few hours each week.”

After coming in contact with the center earlier this year, the decision to run wasn’t a difficult one to make. Being a part of Team Respite only made the idea more appealing and he knew he could make it to the finish line, as this race will be Anderson’s second Marathon.

Last year Anderson trained for the Marathon with The Campus School, and had intended to partake in the race as a bandit runner. With the imposition of safety restrictions following the Marathon Bombings the year before, however, he ran his 26.2 miles a week early.

Though two marathons is a feat that most avid athletes would be impressed by, Anderson was not always a runner. In fact, the runner in his family was his brother who was a highlight of his high school track team. “His name is still on the walls,” Anderson laughed. “—And then there was me. I hated running—it was just never my thing.”

Though a younger Anderson wouldn’t have expected to run the Boston Marathon, let alone run it twice, after experiencing the tragedy of the Marathon Bombings in 2013 he decided he would start training that summer.

nderson was on campus during the bombings, an experience he can only describe as unreal. Though panic-stricken by the confusion and terror of that day, when reflecting on that Marathon Monday, Anderson focuses on the sense of community that arose in its aftermath.

“I think for a lot of Boston College students, and for me at least, I think it was the first time we felt as we were a part of Boston as a community,” he said. “You can come in and out of this place in four years and then who knows where we will end up, but after that I knew that Boston is my home.”

It was this city-wide sense of community, resonated through efforts like the Boston Strong campaign, that inspired Anderson to try out his brother’s sport. Although he initially thought it would be a miserable set of miles that he just needed to complete, after a summer of training, Anderson realized that running had become one of the most important aspects of his life. Though his last Marathon was draining, once Anderson found the center he knew he would run again.

Most BC students spend their Marathon Monday on the sidelines, cheering on their peers and professors in between stumbles. They wake up early to don their tank tops and fanny packs, and head to Commonwealth Ave. in an excited stupor. Most BC seniors don’t even make it out of the Mods that morning, but Anderson just hopes that he makes it out of bed in time to make it to Hopkinton this Marathon Monday.

“Oh, running? It’s definitely making me nervous, but I have to tell you—my biggest fear is oversleeping,” he laughed.

Though the final week before Monday has been busy—managing his time between final runs and last minute can deposits—Anderson is excited more than anything. He is enthusiastic about the support he will see throughout the course’s entirety, as this year he is running the Marathon with an official number rather than with the Campus School a week early. However excited he is about reaching Mile 21 and running past all of his friends at BC, the prospect of jelly beans along the way—a snack handed out by many Marathon onlookers—is a close second in terms of what excites him about Monday.

Anderson knows that this run will be a very different experience than last year, but anyone who knows Brendon can attest to the fact that come Monday, he will run past BC with a smile on his face, wearing a red Respite Center T-shirt, with Katy Perry blasting from his headphones, and that he wouldn’t hesitate to stop and pick up a can along the way.