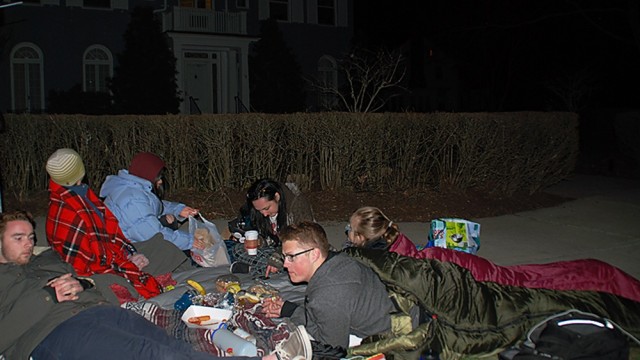 Updated April 21, 5:54 p.m.: One member of environmentalist group Climate Justice at Boston College was warned that a police report would be filed for her actions the morning after an overnight vigil outside Botolph House, the administrative office for the president and executive vice president, according to member Nate Nesbitt, GA&S ’19.

University spokesperson Jack Dunn said that he spoke with the Boston College Police Department, and had it confirmed there was no negative exchange between members of the organization and the police department. All the officer asked, Dunn said, was the name of the student so that he could confirm who was delivering the letter in the report of the conversation.

Following a speech by environmentalist Bill McKibben, members of Climate Justice at Boston College chose to hold a vigil—their second of the semester—outside the office of University President Rev. William P. Leahy, S.J., on Thursday night. Several of the demonstrators slept overnight on the sidewalk outside the office and present President Leahy with a letter outlining their requests for the University in the morning. The letter outlined a course of action for BC to take to divest from fossil fuel companies. Around 30 students attended the vigil, and approximately eight students stayed the night.

Around 7:45 a.m., the members of CJBC woke up, cleaned up their site, and changed location so that they could see both entrances of the house. A member of BCPD came up to them and asked what they were doing, and what their intentions were, said Zack Muzdakis, one of the overnight protesters and A&S ’17. He said the officer told the students that as long as they do not cause a disruption, there is no problem.

“We told him we’re here because we’re Climate Justice, we’re BC students, we want BC to divest from fossil fuels and we’re here to deliver a letter to Father Leahy’s office,” Muzdakis said.

When the demonstrators saw a member of the BC administration walking into the house, one member of Climate Justice handed him a letter. Dunn confirmed that a member of the group delivered a letter to an employee of the President’s office.

After the student delivered the letter, a member of BCPD pointed at her, Nesbitt said, and warned her that he would file a police report.

Students sleeping at the site said that they consider themselves part of a larger movement that includes universities across the city of Boston as well as the nation. They noted how students at Harvard University are staging similar, larger scale demonstrations throughout the week. Thursday’s vigil and subsequent sleep-in were most closely modeled after what is currently happening at the University of Colorado Boulder, said Erin Sutton, a member of Climate Justice and A&S ’16.

“So many schools are all escalating and all using the same words and the same signs and we’re all working in coordination with each other,” she said. “There may only be a few of us here but we’re an extension of a national movement.”

Because the vigil took place in Newton rather than on-campus, it did not need to be a permitted BC event, according to those at the protest. Nesbitt met with the Newton Police Department Thursday afternoon to ensure that the event could take place. The meeting affirmed that the students could meet, but not on BC property.

“BC has made it very clear we’re not allowed on their property tonight,” he said.

The letter to Leahy, which was posted to Climate Justice’s Facebook page Thursday evening, outlines a list of requests from the group, which is not currently a registered student organization, but was moved along to a final stage in the recognition process on Sunday. The letter urges President Leahy to act on several points, including a request that the University release a statement on its divestment guidelines and another that it remove sanctions imposed upon Climate Justice members for past infractions. The group has requested President Leahy respond by Earth Day, April 22, Nesbitt said.

“CJBC will never cease to push for what is just, but with your support and cooperation, we can achieve something great,” read the letter to Leahy. “The silence about climate change and divestment must come to an end.”

An earlier version of this article misidentified the location where the protesters were as the president’s house. It is his office. The article has been changed to correct this inaccuracy.