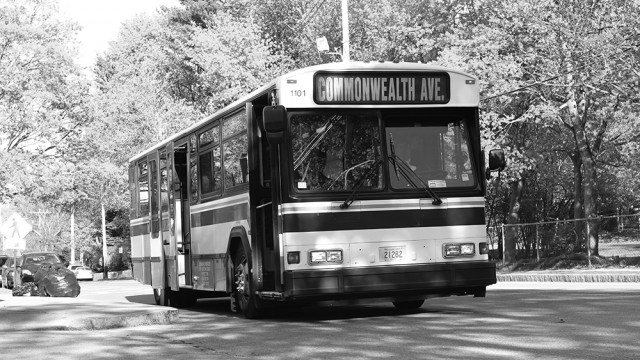 Boston College is piloting a new bus route that goes to StarMarket, The Mall at Chestnut Hill, Wegman’s, and The Street, the strip mall on Boylston. This expansion of the University’s transportation offerings is in response to a post on Campus Voice, a website run by the Undergraduate Government of Boston College (UGBC) that acts as a free space in which students can post suggestions as to how the student government can better improve life on and off campus. The new bus route represents one of the most tangible accomplishments of UGBC this year and a great reflection on the power of Campus Voice. Although the bus route should be celebrated, it will hopefully be the first in a series of more substantial changes brought on by UGBC, which is still working to establish itself as an authoritative voice for change within its new constitutional framework.

UGBC has supported a number of successful advocacy programs recently, which shows that its new organizational breakdown lends itself to educational programming. Looking to have a broad discussion on rape and sexual assault on campus, and how to prevent it, the Concerned About Rape Education (C.A.R.E.) Week that took place this past March brought in a myriad of speakers and culminated with a “Take Back The Night” event, bringing together students, faculty, and survivors for a night of solidarity for those that were affected by sexual assault.

Although C.A.R.E. week was primarily a University run event, UGBC provided much needed assistance. The same goes for F.A.S.T.—Faith, Action, Solidarity, Today—Week, which also occurred this past March, and allowed those returning from service trips, such as Arrupe, and organizations participating in service in and around Boston, such as 4Boston, a chance to engage in a conversation about integrating the lessons learned into their daily lives. These two weeks, paired with programming like the year’s Be Conscious campaign, show that UGBC is capable of creating dynamic programing that hones in on very specific topics, raising awareness on particular campus issues.

The absence of major University-level policy changes brought on by this year’s UGBC administration, however, is evidence of some of the growing pains associated with flipping the student government purely into an advocacy body. The bus route represents a tangible change that students will be certainly aware of, and it’s important that there remain some physical reminders of the work UGBC does, considering much of its advocacy work so far has centered on policies mostly invisible to students, later to be left in administrative limbo.

3,411 students voted in UGBC’s most recent president and vice-president election, which is under half of the student population. This low turnout seems to reflect many students’ feeling of disinterest toward UGBC. Having an easier trip to local hotspots could help bring more students to platforms like Campus Voice and begin to build faith in the restructured student government.

UGBC
How Will BC Respond To Losing Olivier Hanlan And Will Magarity?
Climate Justice’s Potential Path To Legitimacy