Home » BC Runners Reflect On Marathon 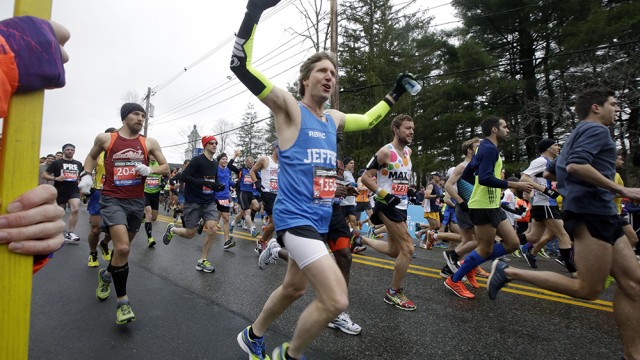 BC Runners Reflect On Marathon

undreds of Boston College students lined a rain-soaked Commonwealth Ave. Monday to support participants in the 26.2-mile journey from Hopkinton to Boston in the 119th Boston Marathon. Several Eagles, however, took to the other side of the fence.

Ryan Reede, A&S ’16, who ran to support the Boston Celtics Shamrock Foundation, said his training as a triathlete in high school prepared him for the “high stress, extremely competitive endurance racing environments.”

Yet, even his years of experience could not remove some of the race’s greatest challenges, most notably Heartbreak Hill—an obstacle for which Reede believes he could not have adequately been prepared. After making it up the hill—heart intact—Reede was welcomed by the “familiar stretch of Comm. Ave.” and his fellow Eagles. The adrenaline rush propelled him, for a time, to a sub 7-minute mile pace. Shortly thereafter came an impactful moment for the seasoned veteran.

“As the course curved down Chestnut Hill Ave. towards Cleveland Circle, I saw all my closest friends and family donning ‘Run with Reedles’—that’s my nickname—tanks and that had to have been the coolest thing I’ve ever experienced,” Reede said.

From there, raw emotion and a few Bandit friends helped him push past the pain and on to the finish.

Kendall Rusch and Marisa Marshalka, both A&S ’17, were newer to the sport of distance running when their journey began. The pair had run a half-marathon together in the fall and shortly thereafter set their sights on the more ambitious goal of 26.2 miles. They began training in January, a process which Rusch succinctly described as “grueling.”

As race day approached, anticipation mounted. Marshalka came up with the idea of creating a mantra that the two could repeat in the nerve-wracking moments before the race began. Rusch responded by putting the experience in perspective.

“This is just a great problem for us to have,” she said. “We’re so lucky that this is our challenge, that this is what we get to conquer, thinking of those who could not afford the privilege of worrying over a marathon.”

It would take more than perspective to get the friends through the day.

Marshalka recalls riding to the starting line the morning of the race and seeing rain begin to fall down the windshield of the bus.

“It was such a defeating moment,” she said.

Even still, the duo refused to be stopped. The rain proved a challenge, but one that it soon overcame. “The second we turned onto Comm. Ave., I came alive,” she said. The support of friends, along with two gigantic cardboard likenesses brandished by roommates near St. Ignatius, were enough to carry them through.

Brendon Anderson, A&S ’15 cited two reasons for running Monday. The first was the Michael Carter Lisnow Respite Center, an organization that serves men and women with special needs, a cause which is close to his heart. The second is the city of Boston.

“I really feel that the city gives me life and it’s where I have developed my own identity,” he said. “I don’t completely understand why, but running is a way of saying, ‘Thank You,’ for me.”

Along the way, Anderson felt the support of others, most of whom he had never met and never would. For this he was deeply grateful, but it was at Mile 21 that he was truly overcome.

“There is such a mix of excitement, pain, love, and joy that it’s almost a sensory overload,” Anderson said. He said he was deeply moved by the welcome he received.

Stories of remarkable, individual courage fueled by displays of overwhelming collective love seem to make up the fabric of Marathon Monday in Boston. While the elite runners may have captured the world’s attention with their finishes on Boylston St., the attention and the love of the BC community was firmly fixed on the flock of Eagles trailing behind them.