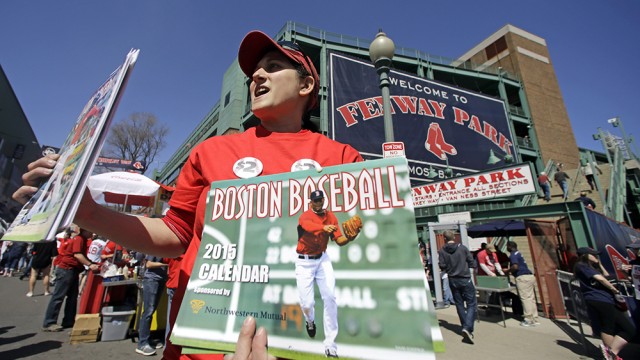 A sea of red and blue attempts to coordinate a cohesive wave while mustard-covered hands clap for the designated hitter. Music blares, beer spills, and men in bright yellow snake through rows of seats offering cups of “chowdah.”

The bat cracks, and the crowd scans the horizon for the chance to catch, or be hit by, a flying souvenir. Sons sit on shoulders, with too-big hats that slump over their excited faces. Once the first pitch is thrown, the Boston fans can’t help but “root, root, root for the home team.”

It’s the nation’s oldest ballpark. Since 1912, a baseball game at Fenway Park has been an experience—an environment rich with history and team pride. The city’s favorite stadium has become iconic of both Boston and baseball.

Fenway Park just celebrated its 103rd birthday on Monday, and it has seen many changes over its long history, especially within the last few months.

Before the Red Sox opened this season with last week’s Monday night game against the Washington Nationals, Fenway announced some of the upgrades that the stadium had undergone during the offseason.

One of the most significant changes was the creation of seating area in many sections throughout the park. According to the Park’s representatives, this enhancement of 174 seats will bring Fenway’s capacity to 37,221 at day games. The options include 28 additional seats in the bleachers, 112 more seats in the State Street Pavillion level, and the opening of a new EMC level suite that can house 34 people. At night games, the park’s capacity increased from 37,499 last season to 37,673.

Many of the changes were accomplished with the help of Mayor Martin J. Walsh, WCAS ’09, who took his first tour of the stadium as Mayor to approve the new enhancements. While on the tour, Walsh headlined the ribbon-cutting ceremony that took place at the new Gate K entrance for kids. Within the new Kids Concourse, there is an activity area as well as an oversized Wally the Green Monster bobble head.

This introduction of new elements at Fenway directed toward younger fans is part of an effort to expand the fan base as well as invite families to take part in what has recently become a seemingly infeasible tradition.

Although Fenway has long been able to facilitate father-son memories, in more recent years ticket prices have increased and fans have drifted away from spending their weekends at the bustling Yawkey Way. Fenway hopes to change this, and has since implemented their “Calling All Kids” initiative, which includes the distribution of free tickets to as many as 25,000 children, a 10 percent discount at the Team Store for the entire season, as well as free membership to the Red Sox Kid Nation program.

“We all know, deep down, that we work in baseball for one reason, and it’s certainly not the money,” said Chief Operating Officer of the Red Sox, Sam Kennedy.

“It’s the fact that we love baseball, and we then really feel an obligation to make sure that younger kids and families have the opportunity to come and experience baseball and Fenway as well.”

In addition to targeting younger fans, Fenway also recently implemented provisions that focus on one of the parks potentially greatest fan base—college students.

With six colleges and universities in walking distance of Fenway Park and over 100 in the Greater Boston area, college students alone could fill up the new seating capacity of Fenway Park. Despite this potential, Fenway has seen lower than average turnout of college students in recent seasons and hopes to change this.

Most recently, Fenway and the Red Sox have initiated their “Student 9’s” program, which allows high school and college students to purchase tickets to any home game during the 2015 season for $9. Student priced tickets are available 48 hours prior to each game and can be purchased online, with the stipulation that a student ID is present upon entrance to the park. The tickets are only guaranteed to be standing room only, but will be automatically upgraded if seats are available.

“It is a very simple program to understand because we wanted to come up with a price point that, in most cases, is something that everyone can afford,” Kennedy said. “We haven’t done our jobs if people come to college in Boston and New England and haven’t had the opportunity to come to a game at Fenway Park.”

Fenway is also hosting two special themed college nights in April and May in hopes of attracting city students. Tickets to these games, Freshman Night and Greek Night, will be for reduced-price seats as opposed to SRO.

The stadium has been reaching out to local campuses in their attempt to bring students to Fenway.

The stadium has offered group ticket deals to many of the area’s schools including Boston College, Boston University, Suffolk University, and Emmanuel College.

In a more eccentric effort, Fenway has even brought a Panda mascot to many campuses in celebration of the team’s recent acquisition of star third baseman, Pablo “The Kung Fu Panda” Sandoval.

“We feel like in Boston we have a great opportunity and competitive advantage because of how many colleges and universities are in the New England area,” said Senior Vice President of Marketing and Brand Development, Adam Grossman. “What we hope is that people come in for their four years and then come out with their Red Sox hat for life.”