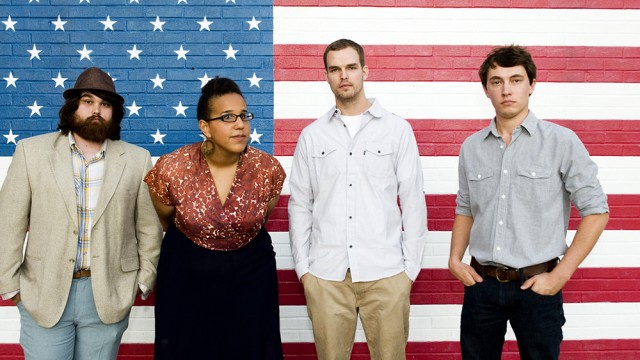 Alabama Shakes’ Sophomore Effort Is An Experimentation in ‘Sound & Color’

Alabama Shakes’ 2012 debut album, Boys & Girls, was an exercise in revamped nostalgia. The band utilized the swampy guitar tones of the ’60s alongside basic, yet exciting rock formats and Brittany Howard’s voluminous and soulful vocals. It was a progressive rock and roll sound, entrenched in a conscious revival of retro influences, yet colored by the production value, explosive builds, and big sounds of the modern era.

Sound & Color, the band’s long-awaited second album, is almost the opposite. It’s a decidedly progressive album, filled with experiments and bold directions, with just a touch of the old-time sounds that once were front and center. Beside the inclusion of some new instruments (strings, synthesizers, and swelling keyboard patches) and the interestingly filtered vocal takes, the band has kept the Creedence Clearwater Revival-like guitar tones, Howard’s soulful voice, and a general rock sentiment. And although these latter elements may no longer be the focus, the experimentation and ambition lead to welcome and exciting new directions.

The heart and soul of Alabama Shakes is still, and perhaps even more so than ever, Brittany Howard. Howard’s voice is more confident and commanding. She sounds more like a band leader than a band member, and takes many greatly appreciated chances in her melodic approaches. Of course, Howard was never shy on Boys & Girls, but in new songs like “The Greatest,” she bends the limits of basic tonality, using unexpected note choices to create unique melodies that are both disorienting and joyful. In the album’s title and opening track “Sound & Color,” Howard’s voice is used as a tool for sonic exploration. It’s layered in tight harmonies over a minimalist accompaniment of drums and xylophone-sounding bells. The result is the most beautiful song on the album—a true experimentation of sound and color.

While the album is full of experimentation, it’s not a complete departure from the musical status quo. Alabama Shakes takes daring steps forward, not through the complete deconstruction of musical sense, but by taking a concerted account of the sounds that their instruments and voices make, and layering them accordingly alongside new and delightfully jarring tones that establish a deeper atmosphere. The minimalistic “Gemini,” for instance, features sparse drums and a repeated bass line consisting of two short notes. Yet, Howard’s voice is filled with echo and filtered through some strange, fear-inducing effect. It builds slowly, adding sharp synthesizers, stretching the sonic space that it sits within.

“Don’t Wanna Fight No More,” the second track on the album gives the best example of the balance between new and old. Built off of funky bass riffs and even funkier falsetto backing vocals, the track is a signal to their past work on Boys and Girls. Yet they continue to play with the sonic dimensions of their instruments. Guitar chords are shrouded in echo, held out, and, later, artificially bent to create waning swells that add a darker, deeper level of space. In “Dunes,” the old school guitar sound that took over Boys and Girls is once again at the forefront, but Howard’s voice is filtered and doubled, creating a unique character to this song. It’s a lot of little effects that add up to big and very noticeable results.

This album is not perfect. Sometimes it gets lost or overzealous in its exploration, and the result is that many of these songs feel like they drag on for far too long. “Gemini,” despite its exciting ambition, at six minutes and 36 seconds, seems more concerned with creating interesting effects than building an effective musical narrative, and somewhere at around four minutes, you’re left wonder where you even are. As a whole, the album can seem a little cumbersome, and in many ways it might be better thought of as a collection of 12 incredibly ambitious and imaginative songs than a cohesive musical collection. Yet the ambition is more than appreciated, and more importantly, more than successful. Alabama Shakes has made a bold statement that loosens without shedding the fetters of the old-time rock sound that once anchored them so tightly to the past.