Home » Erbil: ‘There Is No Last Lecture’ 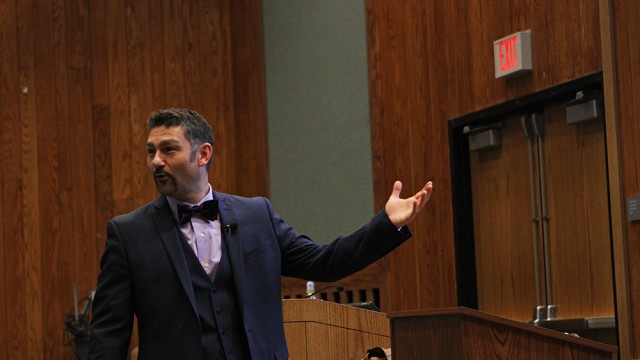 Erbil: ‘There Is No Last Lecture’

When Economics professor Can Erbil was a graduate student at Boston College, the former Chair of the economics department Jim Anders gave him a car. This was his first car, and Erbil was thrilled to have it, despite its age and mileage.

Later that year, Anders invited him to a Thanksgiving dinner for international students at his home. A few days before Thanksgiving, Erbil’s car was stolen, and he was forced to rent a U-Haul van. While driving to the dinner in the van, he saw his stolen car driving ahead of him, and then used his Turkish driving skills to chase the car and corner it in a dead end. Erbil retold this story, one of his favorites, at this semester’s Last Lecture series on Wednesday.

The series is not literally meant to be the professor’s last lecture, but is instead based on Carnegie Mellon’ professor Randy Pausch’s actual last lecture on achieving childhood goals after he learned of his terminal illness.

The idea of giving a lecture as if it were your last has caught on to give academics a chance to share wisdom outside of their specialized fields.

Erbil became an adjunct associate professor of economics at BC in 2012 after he received his Ph.D. from the University. He specializes in international trade and development economics, and is the director of Economic Modeling School and a research fellow at EcoMod Global Economic Modeling Network where he researches and teaches in Singapore, Ecuador, Venezuela, and Turkey, the last on the list being his country of origin.

In his talk, he focused on being happy by having fun, being organized, and having a good attitude. He emphasized the importance of self-awareness, saying that getting a bad grade in a class you do not like is a good thing because it teaches you about yourself and what you do and do not like.

Erbil, for example, went to engineering school before deciding to study economics instead. Students should allow their goals to change as they change, to ensure they are not working toward something that will not make them happy, he said.

Erbil went out to tell a story about a different car: while writing his dissertation, his friend asked if he wanted to go out with her and her friend from France, to which he said yes. He invited her American roommate and took them to a bar, quickly ending up with two very intoxicated French women, who provoked dangerous looking men into attacking their car on their way home, he said. To get away from these men, he ran red lights and was then pulled over by a cop. The next time he went out with the roommate, it was alone. Their relationship eventually culminated in marriage.

Erbil emphasized that he is always learning from colleges, new technologies, and students. He likes trying new things, whether it is a new way to integrate technology into teaching or Game of Thrones.

No one should stop learning when they graduate, he said—they should always feed their curiosity.