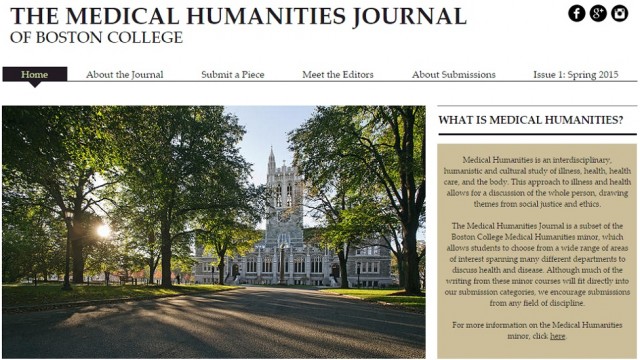 “What Nobody Tells You About Your Mom’s Breast Cancer.” “Ceiling, Four Walls and a Floor.” “Convalescent Serum Theory.” Poetry, research essays, and memoirs might not normally be found next to each other in a medical journal, but The Medical Humanities Journal of Boston College, which launched its inaugural issue one week ago, takes a multidisciplinary approach to the topics of illness, health, disabilities, and bioethics, among others.

The idea for the journal was initially conceived by Amy Boesky, the director of the Medical Humanities minor—now in its second year at BC—in the spring of 2014. She shared her idea with Christopher Kabacinski and Emilee Herringshaw, both A&S ’16, and students in the Medical Humanities program, who spent the summer drafting proposals for the journal.

Kabacinski and Herringshaw, now the editor-in-chief and the managing editor of the journal, respectively, submitted their proposal to the Institute for the Liberal Arts and received a grant in the fall of 2014 that would fund the publication of the journal.

The first issue features publications from undergraduates in the Carroll School of Management, the Connell School of Nursing, and the College of Arts and Sciences.

Students studying economics, chemistry, English, nursing, or biology bring differing viewpoints to complex issues, Kabacinski said. When you put them all in a classroom together, it enriches and complicates the dialogue.

“We’ve had the ability to draw on multiple disciplines and form a comprehensive perspective on some really significant, delicate issues that not only affect members of the BC community but also those beyond the Heights,” Herringshaw said.

The purpose of the Medical Humanities minor, and by extension the journal, is the increased medicalization of everything in the health care field, Kabacinski said. While the quantitative data of patients is important in their medical status, he said that when patients are reduced to just their test results, we can lose sight of their stories which are just as important as the numbers. What is needed is the return of the patient voice, Kabacinski explained. It is what is at the heart of medical humanities.

“I think that medical humanities enables individuals living with illness to really capture and take ownership of their disease,” Herringshaw said. “And I think that’s a very unique facet of medical humanities that allows for the comprehensive consideration of the whole person in addition to the patient and can even allow patients managing different illnesses to find some type of solidarity or common ground, which in itself is empowering.”

Considering this was the first issue, the executive and editorial boards of the journal decided that the primary audience should be the students and community of BC. But as the publication picks up traction, Herringshaw said that the goal was to gain a reputation within the medical humanities community.

The journal is the first of its kind, she said, as these sort of publications are usually tackled by graduate and medical schools on a more professional level.

While Kabacinski and Herringshaw are reaching out to establishments like Harvard Medical School and Massachusetts General Hospital, they are concurrently pushing students at BC to submit their work for consideration in the journal.

The medical humanities minor is a new discipline at the school, Herringshaw said, and she wants students in the program to be able to present and showcase their work.

“I think there’s a ton of potential in the medical humanities community here,” she said. “And one feature in the minor is a senior year publication so we’re really trying to channel that energy into our journal and get some really stellar pieces.”

The 96-page journal will only be published once in 2015 since it took an extensive effort to get the project started, Kabacinski said, and they wanted to cull the best possible content for their initial issue.

In the future, however, both Kabacinski and Herringshaw are working toward a biannual publication.

“Getting off the ground has really allowed us to, I think, establish a precedent that we can follow moving forward and hopefully introduce the next class of leadership in the medical humanities journal because we want this to be a sustainable endeavour that lasts far beyond our career at Boston College,” Herringshaw said. n