Home » Coachella Or ‘No-Chella’: Are Musical Festivals Still Worth It? 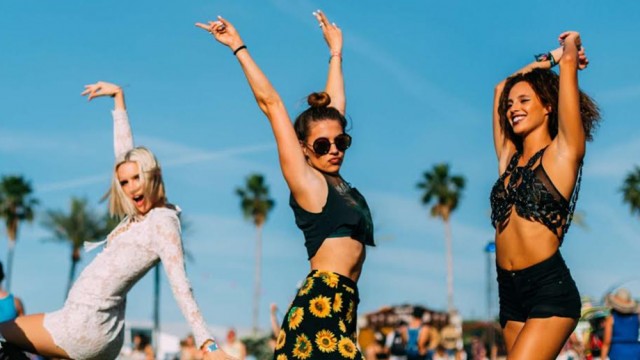 Coachella Or ‘No-Chella’: Are Musical Festivals Still Worth It?

Around mid-April of every year, non-Californians who can’t afford the plane ticket and the unlucky many that failed to snag a three-day festival pass experience a specific type of FOMO—what I like to call the “Coachella variety.” Three days packed in the sweltering desert with no proper restroom facilities, overpriced stadium food, and enough flower crowns and fringe-lined fanny packs to fill the stockroom of an Urban Outfitters hardly sounds like anyone’s idea of a perfect time. Except that it is—for 579,000 people to be exact. With the Coachella Valley, located in Indio, Calif, swelling from zero to tens of thousands of people every year, the Coachella Valley Music and Arts Festival hasn’t died down by its 16th run and doesn’t look like it’s going to anytime soon.

By now, many have aired their grievances with the once widely-acclaimed festival. It began in 1993 as a Pearl Jam concert at the Empire Polo Club as a way to boycott venues controlled by Ticketmaster. In 1999, Paul Tollett and AEG Live organized the inaugural Coachella music festival over a two-day concert. The festival has blossomed since then—with consecutive three-day weekend lineups held every year in April. The success brought in by Coachella can be seen in many places—from the festival’s record-breaking $78.3 million gross in 2014 to inspiring similar festivals across the country, such as Lollapalooza in Chicago, Governors Ball in New York City, and Bonnaroo in Tennessee.

Beyond its associated drug culture, critics have pointed to Coachella’s celebrity endorsement scene. At last year’s Coachella, Lea Michele was paid a hefty sum of $20,000 from Lacoste to wear the brand at the festival. Vanessa Hudgens boasted a similar sponsorship, earning $15,000 from McDonalds to attend its pool party while Aaron Paul received $15,000 for just showing his face. Once touted as a form of escapism in Indio’s picturesque Coachella Valley, the festival has since been accused of forsaking musicianship for commercialization by paying off celebrities to attend.

At its core, however, Coachella serves as a trendsetter for fashion and a mecca for music. Looking past the criticism of festivalgoers appropriating Indian and Native American culture, Coachella fashion has moved beyond just flower crowns and fringe tops in recent years. This year’s festival street wear has seen the likes of kimono tops, ’70s mix-and-match prints, loose and flowing silhouetted dresses, and the wide-brim hat that has been a festival staple for years. Following just a few weeks after Fashion Month, Coachella allows for the eclectic, free-spirited fashion experimentation outside the constraints of everyday wear. In the Coachella Valley, nothing is off-limits. (Except for maybe appropriating the Bindi. Take it from Selena Gomez.)

More than that, Coachella, at its best, shows off the primary reason for the festival’s inception—its music. Boasting of past headliners from the likes of Paul McCartney, Wu-Tang Clan, Radiohead, Eminem, Kanye West, Jay-Z, Foo Fighters, Madonna, Amy Winehouse, and Beck, Coachella is notable for featuring both big-name artists and little-known musicians. Drake, Jack White, and hard rock veteran AC/DC are set to headline this year while artists such as Tame Impala, Alabama Shakes, Interpol. alt-J, Belle and Sebastian, FKA Twigs, and Florence and the Machine are also slated to perform. What sets Coachella apart from other East-coast festivals is its emphasis on emerging artists, exposing festival-goers to a wide range of musical genres and gaining exposure for little-known musicians.

People also seem to forget that Coachella celebrates art in addition to music. Showcasing work from little-known artists, installations from this year’s festival featured Poetic Kinetics, Do Lab, Christian Ristow, and the Haas Brothers. With each passing year, art and sculpture work has grown into large-scale interactive events for festivalgoers.

Coachella has lost some of its esteemed credibility in recent years. The music and arts festival has been dismissed by critics as passe—a once shining beacon of musicianship now reduced to celebrity sponsorship deals and luxury brand endorsements. While Coachella has seen an increase in commercial partnerships in the present day—with sponsorship deals from H&M and Heineken—the festival has managed to preserve the sanctity and focus of the event. It’s still about honoring music’s best and providing festival goers with an immersive experience in both fashion and art.

Maybe someday we’ll make it out to Indio instead of enviously scrolling through Coachella experience blogs and Gigi Hadid’s glamorous Instagram posts.