Home » ‘BC Underground’ Serves As Platform For Hip-Hop Community 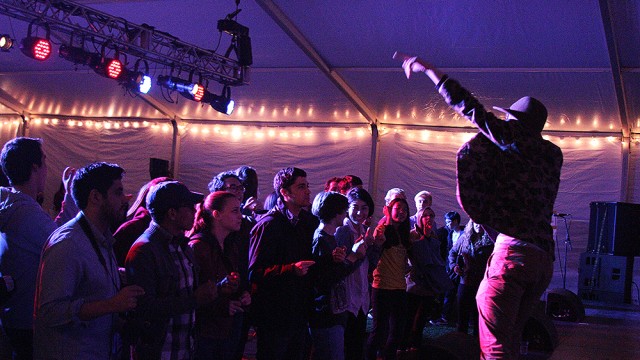 ‘BC Underground’ Serves As Platform For Hip-Hop Community

he tech crew, positioned in the back of the tent, had to squint over several dozen rows of empty seats to see the happenings on stage. A modest Friday evening audience scattered the festival space—mostly friends and a few others who happened upon the performance on their way across campus. This was Boston College Underground, an event created two years ago to give underrepresented artists a place in the University’s annual Arts Festival.

Three runs in, and it’s a shame the term “underrepresented” still needs to be tagged onto the group whenever the festival rolls into town. Hip-hop headliners can quickly push the University’s annual Modstock concert to full ticketed capacity, but for BC’s own hip-hop community, the audience is still lacking.

Underground remains a vital event for hip-hop performers at BC, a platform for veterans and a testing ground for emerging acts. From the back of the tent, it might have looked like a sea of empty seats on Friday, but from the performers’ perspective, each empty seat was a sign of potential.

William Bolton, A&S ’16, has been a part of Underground for three years, and in that time, developed from an eager freshman just looking to get out his mixtape to a professional performer, opening for national acts like the Chainsmokers and Cody Simpson. With his band the Royal Oaks (Dan Lyle, also A&S ’16, on keys and Victor Araromi, A&S ’17, on drums), Bolton delivered a particularly strong set Friday. He closed the evening with “Let’s Stay Together,” his 2014 single which is now nearing 180 thousand listens on Soundcloud. The crowd—ushered by Bolton to the foot of the stage halfway through the set—was singing along at this point, as the Detroit soul singer paced across the stage with a confident step and a safari hat.

Reminiscent of a younger Bolton—at least in terms of ambition—newcomer Emmanuel Laguerre, WCAS ’18, had earlier opened the night with his debut single “The World Is Yours.” The heavy, fast-paced track lyrically details the freshman rapper’s emergence on BC’s music scene as Phenom V. Although the event is relatively small in scope, Underground is a major artery into the University’s music scene, a place for young artists to prove themselves. Friday’s venue was a challenge Laguerre boldly accepted, exhibiting both bravado and wit on stage.

Lyle, performing solo under the moniker the Island, proved to be the most cerebral act of the night, mixing selections from his recent EP with a collections of electronic tracks to create an ethereal sound aesthetic. Decidedly more understated than his showing last year (in which he wore a mask and brought a noose on stage) Friday’s set showcased Lyle’s talents as a producer.

The face of campus record label Chorduroy, Lyle is a pioneer in the production and distribution of independent music at BC. The Island was a new act last April, still looking for recognition from the campus music scene. This go around, Lyle’s show was much more about the music than the crowd. It was withdrawn and thoughtfully executed.

Daniel Imahiyerobo, A&S ’16, and his hip-hop compatriot Daniel Suarez, from Wheelock College, returned to the O’Neill main stage this year far matured from some of the group’s earlier performances, which have erred sophomoric so far as lyricism goes. The upbeat “Here Comes the Sun” solidified Imahiyerobo and Suarez as storytellers, and overall, it was a very impressive night for the hip-hop duo.

Diversifying the night’s offerings was breakdance crew Conspiracy Theory, adding a visual spark to the night with its ever-impressive repertoire of moves.

“Underrepresented” might seem like a loaded term to describe the work of all rappers and breakdancers at BC, and each year, it’s repeated in the event’s billing. You won’t see anyone marketing the underrepresented thespians or a cappella artists of BC. Every spring, the Arts Council invites the University to see some “performances and showdowns” from this ragtag group. Audience participation is “welcomed and encouraged,” the event’s description reads—as if the few dozen of us there should have felt free to snag the mic mid-performance and drop a few verses of our own.

But the truth is that BC’s hip-hop is under-appreciated—and also misunderstood. There were some spectacular performances on stage Friday, and while the artists themselves were not necessarily underrepresented at the event, the 9,000 undergraduates currently at BC certainly were. It was an evening of innovative, original, and often subversive thoughts, flung at the chasm of empty seats and everything they represented.