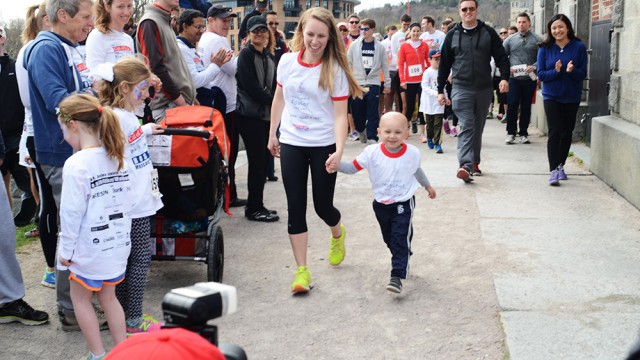 Two years ago, Kayla Hammergren, CSOM ’15, saved the life of a stranger. Yesterday morning, that stranger was given a face and a name. It was an emotional morning at the Chestnut Hill Reservoir on Sunday, as the recipient of a bone marrow transplant met his donor for the first time at the Gift of Life Bone Marrow Foundation’s annual Walk for Life. Phil Lipof, WCVB anchor, registered donor, and emcee of the Walk’s welcome ceremony, introduced Gift of Life supporters to James Strejc, a 4-year-old bone marrow recipient.

Strejc was diagnosed with leukemia on Oct. 8, 2012. When his parents were informed that Strejc would need a transplant, they were overwhelmed by the thought of having to depend on a perfect stranger to act so selflessly for the sake of their son. They were doubtful they would find a match. But one day, they got the call—Strejc had his transplant on Dec. 12, 2013, and was sent home from the hospital six weeks later.

“James’ donor is their hero, and they are so grateful for her,” Lipof said. The Strejcs extended their thanks to everyone involved in the Walk for Life, claiming that all participants in the Gift of Life campaign are responsible for finding their son a donor.

The family was excited to meet Strejc’s donor, an anticipation that reached its height when Lipof announced, “It gives me great pleasure to introduce you to your life-saving donor this morning.”

Hammergren was added to the registry in April 2013 through a drive that her friend, Michael Padulsky, LSOE ’15, organized. Padulsky lost his brother to leukemia, and orchestrated the drive in his honor.
Only five months later, a significantly short amount of time compared to many people who go their entire lives without receiving notice of a match, Hammergren got the phone call. She proceeded with the donation, motivated by her desire to do all she could to save another life.

Hammergren also encouraged others to join the registry, claiming “that there is no greater feeling in the world than knowing that you could change a stranger’s life for the better.” As Strejc’s mother embraced Hammergren at the welcome ceremony, the crowd was reminded of Gift of Life’s mission, and shown first-hand the impact a donation can have on a family. All of the money raised at the walk goes toward offsetting the $60 lab fee that comes with becoming a register donor. Gift of Life’s annual walks have added over 4,000 people to the donor registry, resulting in 71 matches.

Gregg Francis, Gift of Life’s chief operating officer and chief financial officer, thanked the Boston committee who organized the walk for their dedication to Gift of Life’s mission.

Hammergren assured everyone in attendance that the transplant itself is not as scary or painful as others had led her to believe.“My thought process was: if anyone in my family, if anything ever happened to them where they would need this, I would hope someone would do this for them,” Hammergren said.

“Her donation changed, saved James’ life, and a part of her is going to be a part of him for the rest of his life,” Strejc’s father later said Each individual that spoke at the ceremony—Lipof, Hammergren, Francis, and Nick Strejc—encouraged the participants to register for the donor list at the swab booth. The swabbing test is far quicker and easier than the old method, which required a blood test.

“It takes under a minute,” Lipof said. “And then, at any point over your lifetime, you could get a call, and this could be the result of that call—a perfect stranger helping save another perfect stranger’s life … For a human being, there’s no higher call.” When Francis introduced Lipof at the beginning of the ceremony, he called Lipof a hero, referring to his long-time standing on the donor registry. Lipof, however, was quick to correct Francis’ statement.