Home » Changes To The Student Guide Slowly Becoming A Reality 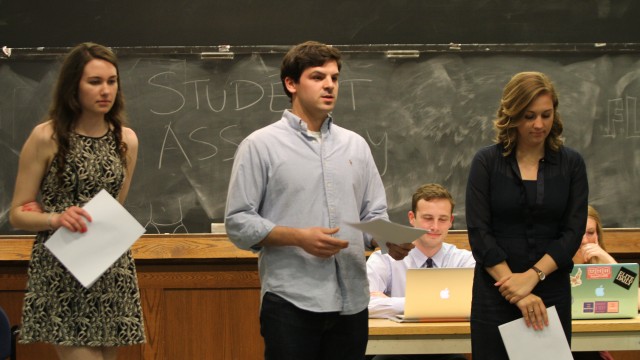 Changes To The Student Guide Slowly Becoming A Reality

The Student Assembly of the Undergraduate Government of Boston College (UGBC) voted to pass its Free Speech and Expression Policy, which if accepted by administrators will create several provisions within the Student Guide aimed at increasing avenues of expression for students on campus. Members of UGBC have been periodically meeting with administrators in the Dean of Students Office to discuss the proposed changes. Now that it has been passed, UGBC’s official position toward the administration is that it ought to enact the proposed changes. Thomas Mogan, dean of students, spoke at the UGBC meeting in regards to problems the administration might have with the current version of the proposal.

One notable aspect of the Free Speech and Expression Policy is the creation of a committee made up of students and faculty to review decisions made by the Office of Student Involvement on the approval of events and fliers. Though the policy has been significantly declawed since Thomas Napoli, A&S ’16, first introduced the proposal, this is one element that seems to be here to stay. Napoli, who spearheaded the project, noted that the campus has become increasingly aware of student needs regarding free speech.

“It’s amazing how that dialogue has transitioned from a very theoretical and policy discussion into a very real discussion this year when we’ve had a series of high profile protests,” Napoli said.

The University should move forward on the creation of the committee, and accept the current version of the full policy without removing more of its major tenets. The concrete changes that remain would do much to expand freedoms for students, including a more lenient flier policy and a possibility for chalking on campus. As Napoli pointed out, students currently in registered student organizations have more rights than those students who are unaffiliated—the former can participate in hosting events and can disseminate fliers around campus.

Mogan, who started as dean of students this semester, made a point of attending the UGBC meeting in order to personally explain to the students the qualms the administration has with UGBC’s proposal. In more fairly addressing student expression, the University will need to continue opening avenues of communication, and while also foster a more open discussion with UGBC on why certain reforms passed by the Student Assembly might or might not be accepted.

The extent to which Mogan and UGBC have been working together suggests a promising future of partnership between the Dean of Students Office and UGBC. Mogan has also shown interest in hammering out the finer details of policy, which is important considering many of the rules currently on the books at BC are either convoluted or altogether contradictory.

Next year’s presidential administration—with Napoli as president and Olivia Hussey, A&S ’17, as executive vice president—has sworn to make student free speech a priority. The work done this semester between Mogan and UGBC fares well for future reforms to the Student Guide.