No Grandiose, A Couple Cliches: Actually Saying Goodbye This Time

“I saw on HBO they were advertising a boxing match. They said, ‘It’s a fight to the finish.’ That’s a good place to end.” – Mitch Hedberg

I lost $20 playing poker Friday night thanks to a catastrophic missed straight and a few bad bluffs. The art of lying has always escaped me—growing up, my mom could always smell fear (or maybe beer?) on me from a mile away—and to date, whenever I really dig in and try to sell a tale, some damned faulty wiring twists the corners of my mouth into a horrible grin. It’s genetic. My dad’s been making that same Michael Scott-esque face for as long as I can remember, from back when he was informing 4-year-old me that my mom went to Spain and was never coming back, to now, when he’s telling my mom he bought just one, reasonably-priced massive stone pig. (Pig quantity: two; price: unreasonable.)

So, with that in mind, this is straight-up, no smiling, the last thing I’ll ever write for The Heights, even though I already wrote a goodbye column back in November. This time I’m serious (assuming I pass History of the Earth). I’ve been wracking my brain for the last week and a half, but I don’t have any non-bullshitty grandiose, sweeping moral-of-the-story conclusions in me—check out last Thursday’s issue and my friend and illustrious titan of capitalism Eleanor Hildebrandt for that. But I do have something to leave behind after four years at Boston College—aside from the suitcase filled with crystal meth and 100,000 rubles that I hid in Carney—so if you bear with me once more, we’ll wrap this thing up with a few thoughts.

1. Don’t underestimate the Gasson basement bathroom. Please properly estimate it. I’ve said it before, and I’m saying it one final time. O’Neill: too crowded. Bapst: too small. Stokes: beautiful but encumbered by overpowered flushing mechanisms. Carney: hah! McElroy: generally looks like a bar fight recently finished up. Lyons: kind of icky. Fulton: A&S kids catch fire if they use the sinks. The Gasson basement bathroom is a good place for good people, and coincidentally it’s also the portal to the Chamber of Jesuit Secrets and the resting place of Teary Hah Elf’s diary. When in doubt, head for the Gathroom.

2. Value professors above pretty much everything else when picking classes. I’ve hit both ends of the teacher spectrum at BC, which ranges from Dead Poets Society enlightening to Ferris Bueller’s Day Off miserable. When you find the good ones, try and hang on to them. If you’re looking to make moves in Add-Drop, my shortlist for most impactful BC professors includes: Professor Wells (Comm.), Professor Ingram (Comm.), Professor Kaplan-Maxfield aka TKM (English), and Father McNellis (I took Perspectives with him), who would probably be driven half-mad by these wordy sentences.

3. Feel free to hate this place sometimes. Maybe it’s an entitlement problem, or maybe some people don’t ever grow up, but there are a lot of crappy people at this beautiful school, and not a lot of diversity in the nightlife, especially for underclassmen. The same guys who were punching holes in the ceiling my freshman year are still working night in and night out to make me glad my sister doesn’t go here. It’s unfortunate, because those kinds of people seem to dictate the scene and have a knack for being the loudest and most visible around campus. That, combined with a social system basically built on exclusion from freshman year forward, can wear you the hell down. I don’t have a semblance of a solution—my biggest regret about college is that I went along for the ride far too often. The BC social order is so ingrained it practically feels mechanized. As soon as you move in, you’re already on the conveyor belt (sponsored by Rubinoff). But it should piss you off that you’re busting your ass to sneak into a suffocatingly moist Mod, or fighting a crowd for 30 minutes to grab a beer from the bar. If you can break out of the heavy rotation, do it.

4. Make the most of it. Or don’t. Wow, what a shitty cliche to close on, right? I know, I hate me too. Here’s a few more, you jerks: You’re the captain of your ship; Be so good they can’t ignore you; Shoot for the moon; Only you can prevent forest fires. Seriously, though, you can get as much or as little out of college as you want. I may be one of the most pathetic English majors to roll through BC in the last decade, and that’s certainly my doing. If the English department knew how many books I’ve actually read for class, they would pull my degree and send me to work in a coal mine. The most important skills and lessons I learned in college came from pouring myself into The Heights, interning during summers, and focusing on the things I really cared about—friends, music, writing, sandwiches, FIFA, etc. You can walk out of here as dumb as the day you walked in, or as wise as an old bespectacled tortoise. The choice is yours.

Let’s end with some levity.

“The thing that’s depressing about tennis is that no matter how good I get, I will never be as good as a wall.” – Hedberg, again. 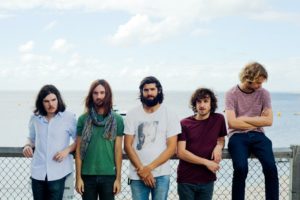 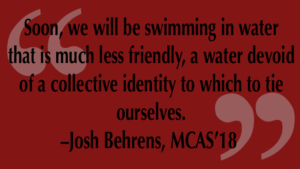