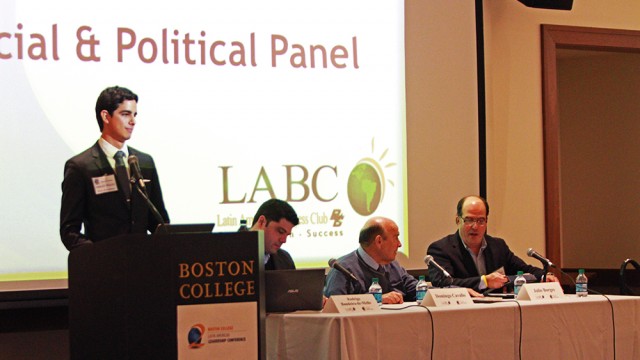 When asked what keeps him grounded in one of the most corrupt and volatile environments in the world, Lorenzo Mendoza, CEO of Empresas Polar—the largest privately held company in Venezuela—said that moral concerns have to come first. “My [foundation] is my values and principles,” he said. “In a country that ranges from the surreal to the schizophrenic … you have to be true to yourself.”

On Saturday morning, a panel of six business professionals and lawmakers in Latin America, including Mendoza, talked at the second Latin American Leadership Conference about the opportunities and challenges individuals and organizations face to promote sustainable growth in the region. The event was hosted by the Latin American Business Club (LABC) with the help of AHANA Management Academy, Brazilian Club Of BC, CASA, Smart Woman Securities, UGBC, BC Entrepreneurship Society, and OLAA.

The conference aims to expose students to the existing opportunities in the emerging markets of Latin American and to increase awareness of the social and political issues pertaining to the region.

Mendoza attributes much of his success to his hands-on leadership style, as he constantly communicates with his 70,000 workers. He exposes them to the vision of the company and has them understand where it is going. He emphasized the importance of having his workers see him “walk the walk” and be as involved in the day-to-day operations as they are. He believes that everyone is necessary, but no one is indispensable.

“I cannot do your job and you cannot do mine,” he said. “It’s like in baseball, only the center fielder can catch a fly ball hit right at him.”

Orlando Cabrales Segovia, former Colombian viceminister of energy, spoke at length about the changing business climate in South America, especially due to both the 2009 financial crisis and the current low prices of oil. He explained that the strategies needed to affect economic growth must be tailor-made for each situation. Although South America is one region, he said, there are many countries with different needs.

Cabrales, Mendoza, and Patricia Lopez, Estee Lauder’s senior vice president, were also asked about the inequality gap and the lack of access to education that many of the Latin American youths have.

“Twenty-three million kids [in Latin America] have no access to education and 48 percent have problems doing rudimentary academic tasks,” said Robert Murphy, associate professor of economics at BC and the moderator for the panel. “How do you invest in it?”

In response, Mendoza said that private companies are not substitutes for the responsibilities of the state, and instead argued for public private partnerships where private companies complement governmental efforts.

“We can assist and invest,” Mendoza said. “We need more human capital to develop and grow.”

Fighting inequality starts with an investment in education, Cabrales added. Since the oil and gas industries are looking for workers with very specific skill sets, education is very important, he said. If citizens don’t have those skill sets, companies will look outside the country for new workers.

In recent years, the diminishing economic and political reputations of the region have caused some problems for governments and companies alike, as investors do not have the same confidence they did during the last decade. Widespread corruption and high-profile scandals, such as the Petrobras scandal—in which corporate officials of the Brazilian oil giant allegedly paid officials in return for contracts and even kept a portion of the profits for themselves—have kept investors from entering the region.

Mendoza pointed out that the incentives for corruption are ever-present, especially referencing the measures implemented by the late-Venezuelan President Hugo Chavez and carried on by his successor, Nicolas Maduro, where the government could expropriate any privately-owned assets they deemed underused or “used to perpetuate the economic war on the country.”

“Foreign investment is critical for the development of our countries,” Lopez added. “Corruption is a huge issue … [we] must choose the harder right, not the easy wrong.”

During the Q&A portion of the event, the panel was asked the question that is present in the minds of Hispanic students abroad: “Should we go back to our countries or stay abroad?”

Cabrales said that it is good for the country if the students who are abroad in the U.S. return to their homes. The knowledge and international experience they bring back from their time in a different country only helps with the growth of their home country.

“Always go back,” Mendoza said. “No country can develop without its best talent.”

5 COMMENTS ON THIS POST To “Rebuilding Latin America Through Education”