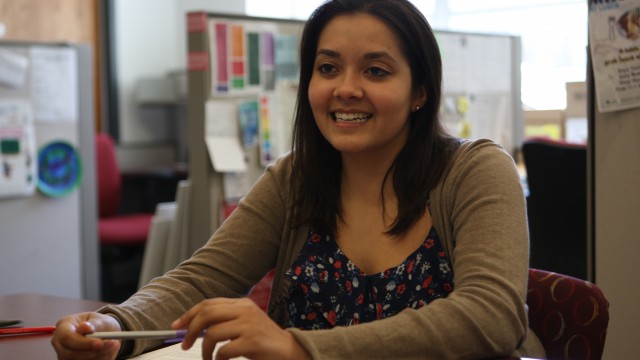 In her campaign for president of the Undergraduate Government of Boston College (UGBC), Nanci Fiore-Chettiar, A&S ’15, pledged to transform the culture and the perception of the organization, and more fully embrace UGBC’s role as an advocacy organization—looking externally, rather than internally.

Following a year characterized at times by internal conflict, administrative roadblocks, and big constitutional changes for the organization, Fiore-Chettiar emerged with a record indicating that she succeeded on much of what she set out to do, although further progress is still to be made in cementing UGBC’s work in advocacy.

The 2014-15 academic year saw with it a series of rallies, protests, sit-ins, sleep-ins, and die-ins. These events have been a focal point for University administration and UGBC alike this year, and with them emerged questions of how the school should respond. This was a distinct challenge for Fiore-Chettiar’s administration.

Certain internal incidents also slowed the progress of this year’s leadership. The forced resignation of the executive vice president, Chris Marchese, A&S ’15, due to a disciplinary conflict, and the absence of a dean of students for the entire first semester, tied up the executive council for much of the fall semester.

With the transfer of leadership from Fiore-Chettiar and executive vice president Connor Bourff, A&S ’15, to the incoming administration of Thomas Napoli, A&S ’16, and Olivia Hussey, A&S ’17, the question of this year’s legacy looms as UGBC’s efforts for the spring wind down.

Fiore-Chettiar and Marchese assumed their roles as president and executive vice president in the spring of 2014, soon after the passing of a constitutional revision splitting UGBC off from its programming division (later to become the Campus Activities Board). The incoming student government executives enter office with the intent of refocusing the organization as an advocacy body, reconnecting UGBC with its disinterested undergraduate constituents, and reevaluating the organization’s priorities.

“I think that we did a really great job of making advocacy the sole driving force of our organization, and that’s in all aspects—everything from quality of student life, to issues of diversity and inclusion,” Fiore-Chettiar said.

For Fiore-Chettiar and Marchese, the shift away from an internalized organizational focus—one that had marked previous administrations—was key to regaining touch with the student body. The two sought to address and advocate for the needs of students, outlining in their campaign an extensive timeline of policies and initiatives designed to address a range of social issues and student experiences.

“Our very first order of business was to make it very clear to UGBC that we were not going to spend a year looking internally, we were going to actually reestablish a connection with the student body,” Marchese said.

The centralized focus on the plurality of student populations on campus has been a strong suit for this administration—the organization brought AHANA and GLBTQ issues to the forefront of campus conversation, through programming and campaigns throughout the year. In addition to the organization’s staple programming—National Coming Out Week, AHANA Celebration Week, and the Annual Gala, among other events—new programming like “GLBTQ in the Workplace,” an event where area professionals spoke on their experiences as members of the GLBTQ community, speaks to the organization’s renewed commitment to diversity and inclusion, said Martin Casiano, vice president of diversity and inclusion and A&S ’15.

A spotlight on civic engagement and women in leadership—from the ElectHer Conference to the Own It Women’s Summit—has been another fixture that this administration counts as a success. Increased campus dialogue on issues of mental health—sparked by programs like the year-long Be Conscious campaign and the successful “What I Be” photo campaign—and sexual assault, led by the organization’s commitment to Bystander Education and events like the Jesuit panel on sexual assault, were part of the administration’s efforts to create conversation around stigmatized issues.

Though the organization has endeavored to bring awareness to social issues through events and programming, completing the extensive policy work that was initially outlined in Fiore-Chettiar and Marchese’s platform timeline proved challenging for the organization, with some of the initial plans outlined in their platform left incomplete.

“I think when we created this [timeline], this is what Chris and I at the time really wanted to accomplish, based on all the student feedback we had gathered. But, at the end of the day, there are also 148—plus the freshmen—individuals in the organization who also have passions and goals that they want to accomplish,” Fiore-Chettiar said. “And so, it was recognizing that priorities have to shift—not only based on the passions of the individuals in UGBC, but also what’s relevant on campus at the time. As a result, not everything in the timeline is accomplished, but I would say we accomplished more than we outlined in the timeline.”

Efforts at University policy change were stymied in the fall with the absence of a dean of students, as one was needed to oversee any policy work pertaining to student life that UGBC sought to complete. With conduct reform and student life central to many of the organization’s policy goals, UGBC administration postponed work on these policies until the new dean of students, Thomas Mogan, was appointed on Jan. 5.

“Perhaps we were naive to think that we could do all of this in a year, and we definitely promised the student body that we were going to be transparent with them, and I think that where we could have done a better job is communicating with them how difficult it is to work on policy changes in one year, when BC is not internally structured to proceed at a pace that the rest of us would find acceptable,” Marchese said.

Furthermore, Marchese’s high-profile resignation in November also threatened to stifle the goals, work, and focus of the organization.

“I think that the way that it happened towards the end of the semester, it definitely took up a lot of our time and energy, specifically as an executive council,” Fiore-Chettiar said. “Moving into this semester, it was really a priority of ours to just move on, reenergize the organization, remind everyone why we’re here, and start working on policy and advocacy again.”

Bourff filled Marchese’s vacant position as executive vice president, coming from his role as vice president of student initiatives. Marchese emphasized that Bourff’s respectability, intentionality, and fresh perspective helped assuage an otherwise challenging transition. For Bourff, the transition was drawn out when facing the initial possibility of Marchese’s return, but upon his installment, he was found he was quickly welcomed into his new position.

“Once we determined that Chris wasn’t returning to UGBC this semester, I was incredibly impressed by how quickly the Student Assembly welcomed me and allowed me to set some ambitious goals for our remaining semester,” Bourff said in an email. “I expected that it would be challenging to earn the respect of the assembly, and to set their goals, but these are people who care intensely in serving their fellow students.”

Fiore-Chettiar viewed the transition as an opportunity to refocus and re-energize the organization in the second semester.

“It really drove me to want to do even more than we set out to do, because I did not want that to be what this organization was remembered for this year,” Fiore-Chettiar said. “It was definitely a driving force behind a lot of what we accomplished second semester.”

Bourff considers the most important work of this year’s leadership to be in the changes it’s made to BC’s culture.

“The successes I am most proud of are the ones that have actually changed student culture and behavior,” Bourff said. “This year there is more dialogue on this campus about race, sexual assault, LGBTQ issues, mental health, ability, service, and socioeconomic class. That is directly the result of the hard work of every member of our undergraduate government. That would not have happened in the same way without UGBC.”

UGBC’s Mid-Year Review, a report that evaluated members’ perception of the organization and its leadership, showed that the undergraduate government remained internally optimistic through a time of transition. The report, which was made public to the student body, chronicles members’ satisfaction with the executive council (122 out of 129 members indicated that they were pleased or very pleased with the performance of Fiore-Chettiar) and addresses concerns for next semester, such as increased accountability, communication, and collaboration across the organization.

As for the organization’s relationship with University administration—namely Gustavo Burkett, director of the Office of Student Involvement (OSI), and Mark Miceli, the associate director of Student Engagement in OSI—Fiore-Chettiar, Marchese, and Bourff noted Miceli’s support and guidance in advocating for and working with the organization.

“It’s different when you work with different administrators, not everyone has the same style,” Fiore-Chettiar said. “But at the end of the day, it’s their job to support you, and I’ve definitely felt that [support], at least in my role—not just with OSI, but also with Dean Mogan as well.”

“It has been a great pleasure to work with all of UGBC this year, including all of the executives,” Miceli said in an email. “Nanci’s strong leadership during Chris’s resignation, and Connor’s willingness and ability to take on a new role within UGBC really speak to their commitment to UGBC and serving the students of Boston College. As the year winds down I look forward to continuing my work with them, and the new administration getting sworn in this week.”

With Napoli and Hussey set to assume their positions as incoming president and executive vice president next week, Fiore-Chettiar hopes that they will be able to continue the transitioning of UGBC’s role, and see to completion the policy work that remains unfinished. When asked what she hopes her administration will be remembered for, Fiore-Chettiar said that promoting dialogue—through policy and advocacy—has been a huge tenant of this term. She cited UGBC’s speaking out following the die-in, the panel on sexual assault given by the Jesuits, and the free expression proposal as signifiers of the direction the organization is headed.