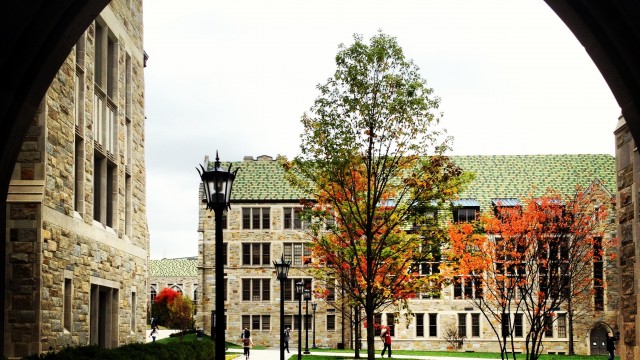 A Meeting On Real Estate Economics And Current Trends Of Millennials

Millennials are the “rental generation,” according to Bryce Blair, former chairman and CEO of AvalonBay Communities—they prefer to rent rather than buy, even when it comes to furniture and living spaces. This tendency coupled with the rising average age of marriage will most likely drive up the age at which people buy homes, he said.

At the Corcoran Center for Real Estate and Urban Action talk, Blair projected trends in real estate shifting to more urban locations—this is because the millennial generation favors location over space, and urban over suburban housing.

Neither Ingrassia nor Blair knew they wanted to go into the real estate business when they were in college: Ingrassia was a history major, and Blair studied civil engineering at the University of New Hampshire. After college, Ingrassia received his law degree at Fordham, and Blair worked for an oil refinery. Neither enjoyed the professions they had been trained for, although Blair liked the idea of building, he said.

When asked about weighing costs and benefits of acquisitions, Blair explained the Real Estate Investment Trust (REIT), created in 1960, which deals with commercial and financial real estate and provides structure to the real estate market. Because of this regulator, prices are fairly competitive but acquisitions tend to be low risk. AvalonBay recently bought the Prudential apartments for about 130 million and put in more than that amount to working on the buildings, and much of the work is unquantifiable like new roofs and other projects.

When asked about private versus public companies, he explained some of the benefits of being public company, such as having access to public and private debt and a long line of credit. Ingrassia agrees with this, but argues that private companies have a greater degree of autonomy.
Both acknowledged that the real estate market has a cycle of ups and downs, which happen about every six or seven years, and that good cycles build on themselves as do bad ones. Blair compared them to “childbirth”—it is painful, but does not keep people from having another child and going through it again—once they forget about the pain.

Often companies don’t prepare for busts even though they are bound to happen, he said. Ingrassia agreed, saying that there will always be downturns like in 2008, after Sept. 11, and even as far back as the 1600’s with the high demand and then collapse of the tulip market in the Dutch economy. Financial panic has a “contagious effect” in industry, he said.

Blair explained that there was a “period of euphoria” where people were buying homes due to several reasons including public policy which encouraged this, and that home ownership rose to an unprecedented 70 percent.

He says that this is actually the normal rate which will probably continue, and that the key is to have capital to buy with during times of downturn when things are cheap.

corcoran center bryce blair paul ingrassia
If We All Kept Silent: If We Learned To Listen As Much As We Talk
Momentum Award: Emergency Staff